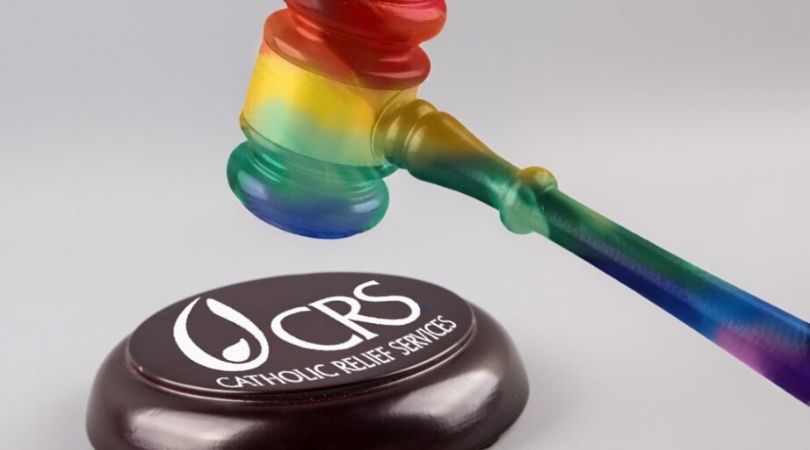 In apparent anticipation of the June 15 ruling by the Supreme Court of the United States that the 1964 Civil Rights Act extends anti-discrimination protections to homosexuals and transgenders, an anonymous plaintiff going by John Doe (a man in a same-sex "marriage") filed a lawsuit on Friday, June 12, against Catholic Relief Services (CRS) for sexual discrimination and "breach of contract, detrimental reliance, and negligent misrepresentation."

In the lawsuit, Doe accuses CRS of sexual discrimination for denying medical insurance coverage for his "husband," claiming that CRS first promised prior to hiring him that such coverage would extend to him — later reneging on that promise. Doe also claims that when he tried to get CRS to honor its promise, a senior CRS official threatened to fire him for continuing to pursue those benefits.

Within the 22-page complaint are several factors which immediately call into question the Catholic identity of the organization on the whole.

In the Background Information portion of the complaint, beginning on page 3, Doe indicates that in mid-2016, a CRS recruiter contacted him "regarding a potential job opportunity with the organization." Doe traveled to Maryland for an interview, and during a follow-up call with the recruiter, Doe asked if his "husband" would be covered by CRS' spousal health insurance benefits, to which the recruiter responded, "All dependents are covered."

CRS has been under fire for repeatedly promoting contraception in the Third World.

At this point, in mid-2016, it should be noted that CRS was on the verge of hiring a man that CRS knew was in a same-sex "marriage." But in April of 2015, a full year prior to the hiring of John Doe, The Lepanto Institute revealed the fact that CRS had a senior executive vice president who was in a same-sex "marriage." The following month, the then-CEO of CRS, Dr. Carolyn Woo, gave an interview to Aleteia regarding the situation, saying:

CRS has a senior person who is in a civil gay marriage, and the question is: "Is that a violation of Church teaching?" I just want to say we are working through this. Gay marriage, of course, is a very complex issue. The Church is very clear that marriage as a sacrament is a between a man and a woman open to procreation. There's also the Church teaching on natural law. Those are the teachings. … Does it mean that the Church should not employ anyone who is in a gay marriage? Are we giving a blanket No? … If it's not a blanket No, are there particular positions, such as positions that are ministerial in nature, positions which relate to the formation of the faith of young children at school? … While the teaching is clear, as it translates into practice there has not been defined a common approach for dealing with employment, particularly when the position is non-ministerial, when the person is not a Catholic, when the agency is not a school. So, we're in that area when there have been various steps forward, but not a clear path.

Civil marriage is protected by the State of Maryland and 36 other states, as well as D.C., so we're also dealing with a new intersection between in this case state law and Church teaching where the practice is being defined. (emphasis added)

Exactly one year later, The Lepanto Institute again caught CRS employing a man in an active homosexual relationship. It was right about this time that CRS was actively recruiting Mr. John Doe, who told them before being hired that he is in a same-sex "marriage," and for a time received health insurance coverage for his "spouse." According to the lawsuit filing:

During his onboarding session, CRS' staff reiterated to Mr. Doe that all dependents would be covered under the CRS-sponsored health insurance, with no mention of exception for same-sex spouses. With this confirmation, Mr. Doe applied for his health insurance, including coverage for his husband by submitting his marriage certificate to human resources and registering himself and his husband on the CRS Employee Self-Service website. (emphasis added)

A little over a year after Doe was hired by CRS, CRS finally ended health insurance coverage for his same-sex partner.

The basis for Doe's lawsuit is Title VII of the U.S. Civil Rights Act of 1964 and the Maryland Fair Employment Practices Act (MFEPA). This past Monday, June 15, the Supreme Court ruled that Title VII civil rights protections against discrimination on the basis of sex extend to homosexuals and transgenders.