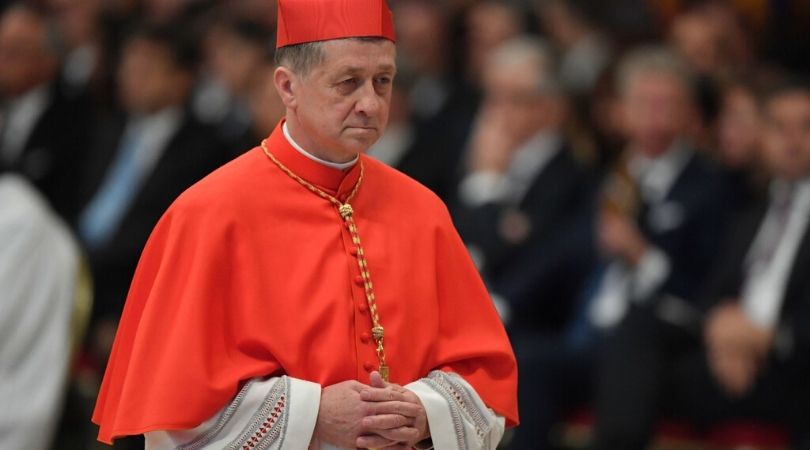 Cardinal Blase Cupich brushed aside prayer when asked on Thursday about those like Republican Senate candidate Mark Curran, who are calling on the Catholic Church to safely dispense the sacraments amidst the pandemic scare.

"Religion is not magic where we just say prayers and think things are going to change," said Cupich. "God gave us a brain and the gift of intelligence and we have to use it in this moment."

Curran, who has been a daily communicant and advocate of frequent confessions, said earlier this month that the Church should find safe ways to administer the sacraments instead of suspending them entirely.

Earlier this month Cupich canceled the Easter Duty, whereby Catholics receive the sacraments of confession and Holy Communion during the Easter season, for those in his archdiocese.

In his decree issued on April 5, Cupich mandated "that the obligation to receive Holy Communion during the Easter season is removed this year due to the impossibility of attendance by the People of God at celebration of Holy Mass."

I am at a loss as to how having one person at a time go into a confessional and maintain distance is different than going to a grocery store.

Confessing serious sins was similarly pushed off by the cardinal to some indefinite period in the future:

All of the faithful, in accord with the Tradition and Teaching of the Church, are urged to offer a perfect Act of Contrition, in complete dependence upon the mercy and love of God, in sorrow for all sins and with a firm resolve to confess all serious sin at the next available time.

On April 6, media reported Curran taking exception to such measures.

"I am at a loss as to how having one person at a time go into a confessional and maintain distance is different than going to a grocery store," said Curran. "Does the Church agree they are not at all essential? What will it take for the Church to push back? Yes, I need to go to confession."

Curran added, "Just seems like there's ways we could be offering the sacraments and we're just not even trying."

Cupich was one of the first U.S. prelates to close churches owing to the pandemic scare. On March 13, Cupich announced all liturgical services in the Chicago archdiocese would cease the following day and remain suspended indefinitely.

In shuttering all parishes the cardinal said, "We must take the better part of caution in order to slow the spread of this pandemic."

Cupich repeatedly discredited those who are calling for the Church to offer the sacraments. In another interview with local media on Holy Thursday Cupich again claimed that prayer was not magic.

We're just not even trying.

"God doesn't allow us to have a religion into a magic formula where we say a prayer and think things are going to go away. We have to take responsibility for our actions and we have to make sure we keep each other safe," asserted Cupich.

But Curran believes many Catholics will be permanently scandalized by prelates shutting off the sacraments completely.

"One of the things the Church should be worried about," observed Curran, "is that the message is being sent, that they're not 'essential.'"

"When they're back open for business," he added, "don't be surprised if more people decide, 'The church wasn't there in our time of need so why are we there?'"

Curran squares off this November against pro-death Durban, who has long enjoyed the support of Cupich.

The COVID Ghetto
It's right around the corner.
Evening News