Copy of online petition will soon be sent to papal nuncio

DETROIT (ChurchMilitant.com) - A petition with 25,000 signatures calling for Cdl. Blase Cupich's resignation is being sent to the papal nuncio.

Cardinal Cupich of the Chicago archdiocese has been under fire for his callous response to the summer's sex abuse scandals and for running a faithful priest out of town.

An online petition states, "Cardinal Cupich must publicly apologize for his insensitivity, intolerance, lack of transparency, lack of willingness to dialogue and resulting sadness, sorrow and scandal to the People of God that his willful actions have inflicted on them, and he must resign his post immediately."

Launched by Church Militant, the petition has more than 25,000 signatures. Now, a copy of the petition is being sent to the papal nuncio, or the Church's official diplomat to the United States.

In late August, the Chicago archdiocese's Cdl. Cupich infamously said in a television interview, "The Pope has a bigger agenda. He's got to get on with other things, of talking about the environment and protecting migrants and carrying on the work of the Church. We're not going to go down a rabbit hole on this."

This was a reference to Abp. Carlo Maria Viganò's bombshell allegation that Pope Francis lifted sanctions against homosexual predator Theodore McCarrick that had been imposed by Pope Benedict XVI.

When NBC 5 Chicago published the video report on the interview, Cdl. Cupich accused the news station of editing the interview unfairly. In response, NBC 5 stood by its reporting and published much longer video excerpts, showing that the cardinal's remarks were not being taken out of context.

But Cdl. Cupich maintained that the video was edited in a misleading way. He even instructed the priests of the Chicago archdiocese to read aloud at Mass a statement from him claiming the soundbite was taken out of context.

Cardinal Cupich would later double down on the idea that the Pope has more important concerns than responding to Abp. Viganò's testimony. On Aug. 29, Cupich told about 200 men studying for the priesthood at Mundelein Seminary, "We have a bigger agenda than to be distracted by all of this."

Eventually, Cdl. Cupich issued an apology in late September for his insensitive remarks. He said, "It was a mistake for me to even mention that the Church has a bigger agenda than responding to the charges in the letter by former Papal Nuncio Archbishop Carlo Maria Viganò."

He added, "What I should have said, because it has been my conviction throughout my ministry, is that nothing is more important for the Church than protecting young people."

"I apologize for the offense caused by my comments," Cdl. Cupich said.

We have a bigger agenda than to be distracted by all of this.

Cupich has also faced blowback for allegedly driving Fr. Paul Kalchik out of town after he and some faithful parishioners burned a blasphemous rainbow flag that was owned by the parish.

The banner being burned was owned by the parish and used to hang sacrilegiously over the sanctuary, blocking the view of the crucifix.

The flag-burning received massive backlash from secular media and from pro-LGBT activists.

In the fallout from the burning of the rainbow banner, priests from the archdiocese came to Resurrection and tried to intimidate Fr. Kalchik. They warned that the archdiocese would force him to go to St. Luke Institute for "psychological treatment." They said he could go to St. Luke willingly — or in handcuffs. There was even a thinly veiled threat on Fr. Kalchik's life.

After that terrifying encounter, Fr. Kalchik fled into hiding, where he remains today. He told Church Militant in an exclusive interview, "Our people were feeling pushed around by the administration downtown. Why should an archbishop tell a faithful group of holy people not to destroy a piece of sacrilegious art?"

Why should an archbishop tell a faithful group of holy people not to destroy a piece of sacrilegious art?

In an interview in 2017, Phil Ponce of Chicago Tonight asked Cdl. Cupich about his thoughts on the policy of Bp. Thomas Paprocki in the nearby diocese of Springfield, Illinois barring same-sex "married" couples from receiving Holy Communion and getting Catholic funeral rites.

Ponce asked, "As you probably know, the bishop of Springfield, Illinois, Bishop Thomas Paprocki, decreed in June that people in same-sex marriages should not receive Communion or ecclesiastical funeral rites. What's your reaction to that?"

Cardinal Cupich replied that "this is not our policy" in the Chicago archdiocese, adding, "We, as a matter of practice, don't comment on the policies of other dioceses." 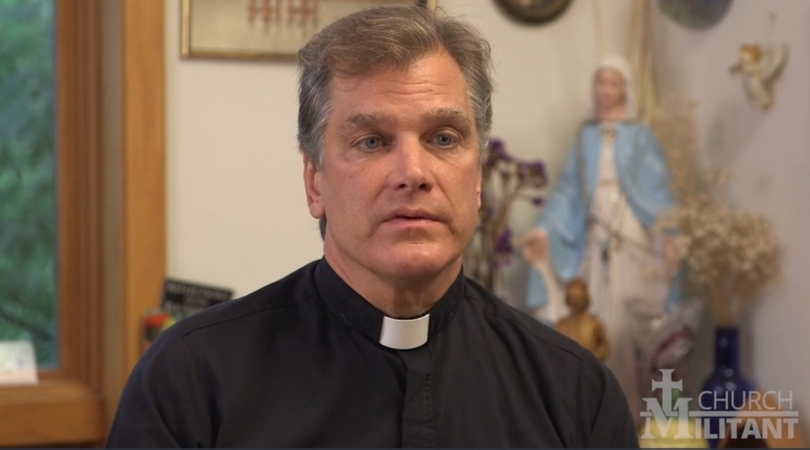