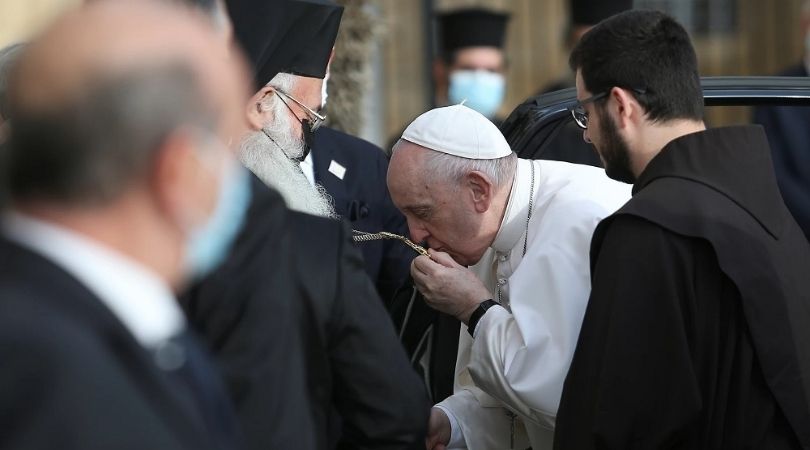 NICOSIA, Cyprus (ChurchMilitant.com) - The Orthodox archbishop of Cyprus has dropped a bombshell on Francis, lecturing the pontiff on Turkey's "ethnic cleansing" of Cypriot Christians and asking him to imitate Pope Benedict XVI's support for Cyprus against the Islamic aggressor.

"Turkey barbarically attacked us and by force of arms conquered 38% of our homeland and its Christian inhabitants, always expelling them from their patriarchal lands," His Beatitude Chrysostomos II reminded Francis during the pope's visit to Nicosia.

Addressing the pope in the presence of the Holy Synod of the Church of Cyprus at St. John's Orthodox Cathedral Friday, the prelate described how the Turks looted the Byzantine churches, priests, mosaics and paintings "with incredible and unprecedented barbarity."

"Not only did they imitate the bloodthirsty barbarity of Attila the Hun, but they surpassed him," Chrysostomos stressed.

"And based on their abominable plans, they changed all our historical place names so that nothing Greek or Christian exists."

"In this holy and just struggle of ours, Your Holiness, we want to have your own active support," Chrysostomos pleaded, noting how Pope Benedict XVI had responded to an earlier request by the Church of Cyprus and mediated through the German government.

As a result of Benedict's intervention, "we were able to bring back 500 fragments of our Byzantine culture, which Turkish archaeologists had transported to Munich," the archbishop pointed out.

When I hear talk of the Christian roots of Europe, I sometimes dread the tone, which can seem triumphalist or even vengeful.

"We also look forward to your help, Your Holiness, to safeguard and respect our cultural heritage and to uphold the timeless values of our Christian culture, which are being brutally violated by Turkey today," Chrysostomos urged.

To say something in defense of the Cypriots and criticizing Turkey's actions in Cyprus would go against all of the pope's irenic efforts at "dialogue" with Muslim leaders; a hallmark of this "dialogue" is that no critical word about Islam or Muslims will ever be spoken, as the pope assured the Grand Sheikh of al-Azhar, Ahmed al-Tayeb, when the dialogue resumed.

The pope's response was muted because this sort of behavior by Turkey, proceeding on Islamic grounds, shows his claim that "authentic Islam and the proper reading of the Qur'an rejects every form of violence" is flatly false. Francis will never utter a critical word about Islam, and that in itself shows why his "dialogue" is useless and self-defeating.

Turkey's 1974 invasion and part occupation of Cyprus in violation of international law resulted in 162,000 Christian Greek-Cypriots being expelled from their homes and becoming refugees in their own country.

Following the invasion, Turkey resettled over 160,000 Muslim Turks to occupied Cyprus in order to change the demographic profile and alter the population balance on the Christian island, according to Cypriot government records.

Not only did they imitate the bloodthirsty barbarity of Attila the Hun, but they surpassed him.

Vatican News and mainstream media virtually blacked out Chrysostomos' pointed address from its coverage of the pope's five-day visit to Cyprus and Greece, even though the pope's media acknowledged Turkey's invasion "forced many Catholic families to flee from the north."

Following the partition of Cyprus in 1974, the number of Maronite Catholics "has thinned down drastically in the north," Vatican News conceded. Cypriot Catholics presently make up 4.75% of the population (38,000) and are for the most part of Latin rite.

Cypriot priest Fr. Georgios Armand Houry said many of the faithful were hoping the pope would help Catholics who were displaced by the invasion to "return home."

Meanwhile, at St. John's Cathedral, a subdued-looking Francis shifted uncomfortably while listening to an Italian translation of the archbishop's address delivered in Greek.

In his response, the pope, who is known for his off-the-cuff spontaneity, did not mention Turkey by name but assured the archbishop of his "prayer and closeness" in "the most troubling problems that beset you and in the best and boldest hopes that spur you on."

"Let us not become paralyzed by fear of openness or bold gestures or give in to talk of 'irreconcilable differences' that in fact have nothing to do with the gospel!" Francis stressed.

I'm very interested in what the Greek Church will do when the heretic of the Vatican steps on the sanctified soil of our Greek homeland.

Later in the day at an ecumenical prayer meeting, the pope railed against the "barbed wire set up to prevent the entrance of refugees," calling for "this island, marked by a painful division" to become "a workshop of fraternity."

In contrast to Benedict, Francis has been extremely reluctant to talk about Europe's roots in Christianity, preferring instead "to speak of roots in the plural because there are so many."

"When I hear talk of the Christian roots of Europe, I sometimes dread the tone, which can seem triumphalist or even vengeful. It then takes on colonialist overtones," Francis said earlier, noting that such talk often has its roots in a deep-seated "fear of Islam."

Significantly, Francis adopted an overtly political stance at the presidential palace in Greece, praising the 2018 Prespa Agreement signed between the Hellenic Republic and the Republic of North Macedonia, which settled the 27-year-long name dispute between the two nations.

Pope, you are a heretic!

"It may seem a utopia, a hopeless voyage on a troubled sea, a long and elusive odyssey. Yet this voyage on a rough sea, as the great Homeric epic teaches us, is often the only way and the only path," Pope Francis noted, attacking "excessive nationalist claims."

The pope also apologized for the crusaders' sack of Constantinople in 1204, noting: "With shame — I recognize this for the Catholic Church — actions and choices that have little or nothing to do with Jesus and the gospel, rather marked by a thirst for gain and power, have made communion wither."

On Saturday, as Francis met His Beatitude Hieronymos II, archbishop of Athens and all Greece, the Greek Orthodox Church refused a Vatican request for an ecumenical prayer meeting.

"The rigid and closed attitude towards the other is present in all churches, but it is stronger in today's Orthodoxy than in Catholicism after Vatican II," Theodore Kontidis, Latin Catholic archbishop of Athens, admitted.

"Catholics are more willing to continue to reform when the social or historical situation demands it," Kontidis said, but the Orthodox "do not want to participate in common prayers."

"This is the line they have adopted in Greece. For them, prayer, the Eucharistic celebration, means full unity. Since there isn't agreement on all points, they feel that one cannot pretend that the differences do not exist," Kontidis confessed.

Francis was snubbed by seven Cypriot hierarchs who boycotted the pope's meeting with Cyprus' Holy Synod. The four metropolitans and three bishops said they hailed from a monastic school and rejected any relations between Orthodoxy and Catholicism.

The rigid attitude is present in all churches, but it is stronger in today's Orthodoxy than in Catholicism after Vatican II.

Greek Orthodox metropolitans Andreas of Konitsa and Seraphim of Piraeus, who have earlier attacked Pope Francis for the "secularization of the Holy See" also boycotted Francis' visit to Athens.

"I'm very interested in what the Greek Church will do when the heretic of the Vatican steps on the sanctified soil of our Greek homeland, which is watered with the blood of many martyrs and heroes," Metropolitan Andreas told Greek Orthodox media in November.

"The coming of the heresiarch Francis Bergoglio to Orthodox Greece," could "only serve to harm the Church," Andreas warned, while Seraphim called for "an end to fruitless and harmful dialogues with heretics."

On Saturday, an elderly Greek Orthodox priest heckled Francis as the pontiff arrived at the residence of Abp. Hieronymos in Athens. "Pope, you are a heretic!" the cleric shouted three times before police intervened and took him away.

In July 2020, Francis delivered a one line non-condemnation after an extended silence on Turkey's Islamic takeover of the Hagia Sophia basilica in Istanbul.

"I think of Hagia Sophia, and I am very saddened," Francis said in his post-Angelus address after Turkey turned the world's greatest Byzantine basilica to its previous status as a mosque after abolishing President Atatürk's 1934 decision to turn Hagia Sophia into a museum.