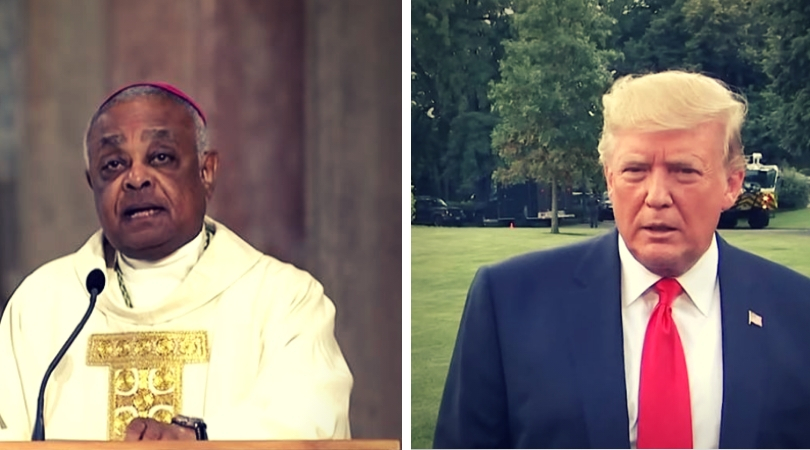 Abp. Wilton Gregory: Comments by president, others, 'have deepened divisions and diminished our national life'

WASHINGTON (ChurchMilitant.com) - The archbishop of Washington, D.C. is accusing President Donald Trump of being divisive.

In comments to Catholic Standard, the official archdiocesan newspaper, Abp. Gregory admitted he is a "pastor" and not a "political leader," then said, "There are, however, sometimes, when a pastor and a disciple of Jesus is called to speak out to defend the dignity of all God's children."

I fear that recent public comments by our President and others and the responses they have generated, have deepened divisions and diminished our national life. In particular, I join my brother Archbishop William Lori in sadness and deep regret for the ways our Maryland neighbors in Baltimore have been denigrated in recent public attacks.

He went on to say, "Comments which dismiss, demean or demonize any of God's children are destructive of the common good and a denial of our national pledge of 'liberty and justice for all.'"

According to The Washington Post, this was Abp. Gregory's first public statement since his installment as archbishop of D.C. on May 21.

Archbishop Gregory argued that Catholics need to take action against divisive and disrespectful rhetoric, declaring, "We must all take responsibility to reject language that ridicules, condemns, or vilifies another person because of their race, religion, gender, age, culture or ethnic background. Such discourse has no place on the lips of those who confess Christ or who claim to be civilized members of society."

Archbishop Gregory: "I fear that recent public comments by our President and others and the responses they have generated, have deepened divisions and diminished our national life." https://t.co/waT7rsaaBn

Prior to his installment in the D.C. archdiocese, Abp. Gregory had a scandalous history in the archdiocese of Atlanta, Georgia.

In September last year, Gregory invited Fr. Martin to give talks at two parishes in the Atlanta archdiocese.

Archbishop Gregory gave the keynote address at the 2017 assembly for the Association of U.S. Catholic Priests, a dissident group of clergy that promotes a loosening of Catholic teaching on sexual morality.

Parishioners at the Shrine of the Immaculate Conception in Atlanta marched in the Atlanta gay pride parade year after year, and the archbishop did nothing publicly to stop them.

Prior to his installment in the D.C. archdiocese, Abp. Gregory had a scandalous history in the archdiocese of Atlanta, Georgia.

About a year later, he hosted a retreat for the organization in his chancery.

Back in 2013, Abp. Gregory returned to active ministry a priest who had been booted from ministry in 2010 owing to homosexual activity.

Due to his extensive pro-gay history, Fortunate & Faithful Families put up a rainbow-colored ad in the Atlanta archdiocese's official newspaper earlier this year wishing Abp. Gregory well as he moved on to his new position in Washington.

Archbishop Gregory offered a public apology in 2014 after spending $2.2 million on a 6,000-square-foot residence for himself.

The archbishop has been scrutinized for his close ties to Theodore McCarrick, the recently laicized ex-cardinal accused of sexually preying on numerous boys and men.

Also, Gregory was a protegé of the late Cdl. Joseph Bernardin, one of the most influential liberal voices in American Catholicism.

In June, Church Militant shed light on allegations that Bernardin was a sexual predator.