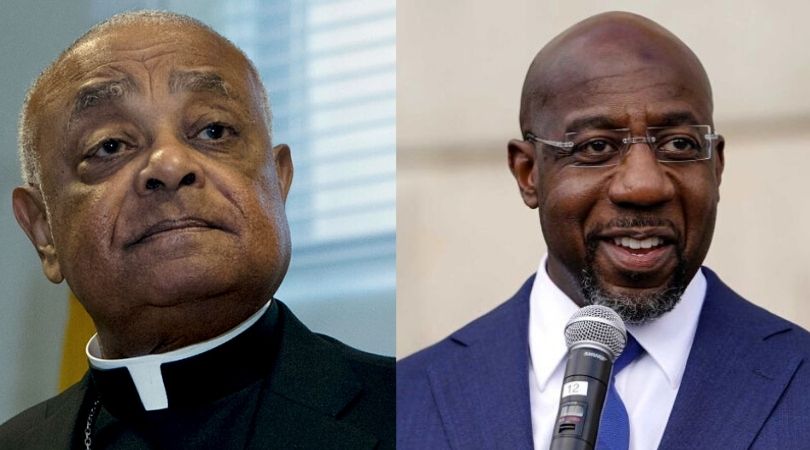 WASHINGTON (ChurchMilitant.com) - The head of the Washington archdiocese has a history of collaboration with a controversial Baptist pastor in Georgia and the state's reported winner of one of the United States Senate races that took place there this week.

Cardinal Wilton Gregory and Raphael Warnock have a history of collaborating and praising one another for environmental activism and community service.

In 2015, when Gregory was archbishop of Atlanta, Warnock backed the prelate's social media campaign in response to Pope Francis' Encyclical Laudato Sí.

"The Roman Catholic archdiocese of Atlanta introduces our 'Refresh' campaign, which encourages Pope Francis' message and engages our community to look at new and exciting ways we can 'Care for Our Common Home,'" reads an explanation on the archdiocesan webpage. "During this campaign, we will highlight and focus on different aspects of our home and life, which will include themes such as recycling, conservation, family and faith."

Gregory discussed the collaboration in the archdiocesan newspaper, The Georgia Bulletin.

"Reverend Dr. Raphael G. Warnock, of Ebenezer Baptist Church, and Rev. Dr. Gerald Durley, a board member of National Interfaith Power and Light, have both strongly endorsed the response plan of the archdiocese of Atlanta," he wrote. "Both of these pastors see that this letter is not one that belongs exclusively to the Catholic Church, but a letter written to all people of goodwill of every faith and those who might profess no particular religious faith."

"Like other historically significant letters, this one tells us a lot about our past and our future. Pope Francis' letter details the consequences of the exploitation of our planet," Gregory continued, "especially those that impact the lives of the poor, who too frequently have no voice in controlling the actions of the powerful and the rich in determining how the resources of this one globe are used and shared."

In 2013, Catholic Charities Atlanta awarded Warnock with its 2013 Archbishop Donoghue Award, which recognizes "acts of charity, compassion and other contributions that have significantly impacted individuals, families and children living in Atlanta and North Georgia."

I don't think nobody like [Warnock] should be running for damn Senate nowhere, running a camp like that.

"I want to thank Catholic Charities for this award. I'm humbled and honored," said Warnock at the time.

Warnock then praised Catholic Charities for its excellent work and expressed gratitude for the Catholic Church's leadership in the community.

"Archbishop Gregory makes us all proud," he concluded.

In 2002, Warnock was arrested for obstructing a police investigation into child abuse at a camp where he worked in Baltimore.

The victim of the abuse, Anthony Washington, is now 33 years old but was 12 at the time. He recently came forward with his story that counselors threw urine on him and locked him outside overnight.

"I don't think nobody like [Warnock] should be running for damn Senate nowhere, running a camp like that," he said. "He should not be running for government."

In 2014, Warnock was arrested at the Georgia State Capitol where he led a sit-in protest to pressure lawmakers to expand Medicaid offered by Obamacare.

In March, his ex-wife, Ouleye Ndoye, called the police to report Warnock ran over her foot with his car.

In tears, she described the incident to an officer. When she was more composed, she explained, "I've tried to keep the way that he acts under wraps for a long time, and today he crossed the line. So that is what is going on here. And he's a great actor. He is phenomenal at putting on a really good show."

Prior to the election in November, one commentator said, "[Warnock] is a phony, a liar, a Jew-hater, a White-hater, a man messed with his wife, a man would chant 'Amen!' to those who would curse America."

Gregory was named a cardinal in December.

Asked if he would deny Holy Communion to Joe Biden — a self-identifying Catholic who promotes abortion, same-sex marriage and a host of positions at odds with Church teaching — the cardinal said, "I want to begin a relationship with him that allows us to have a serious conversation, knowing full well that there are issues that he and I will be diametrically opposed to, but hopefully also being able to capitalize on issues that we can advance together."

"I don't want to go to the table with a gun on the table first," he added. Gregory continued:

As I've said already, the Church lives within society. We don't float above society. We're immersed in the world in which we try to serve.

So one of the things that I would hope is that I could foster a spirit of encounter. The Holy Father, Pope Francis, loves to use that word, and I think with good reason. We have to encounter people. And encounter means not just talking to them, but also listening to them and trying to understand the world in which they live.

Warnock, along with Jon Ossoff, fill the remaining two Senate seats that form a 50–50 party split with Kamala Harris as tie-breaker.

Some critics are concerned Gregory's relationship with Warnock and desire to "foster a spirit of encounter" with Biden suggests the Catholic cardinal in the State Capitol will offer little resistance to an onslaught of anti-Catholic policies.