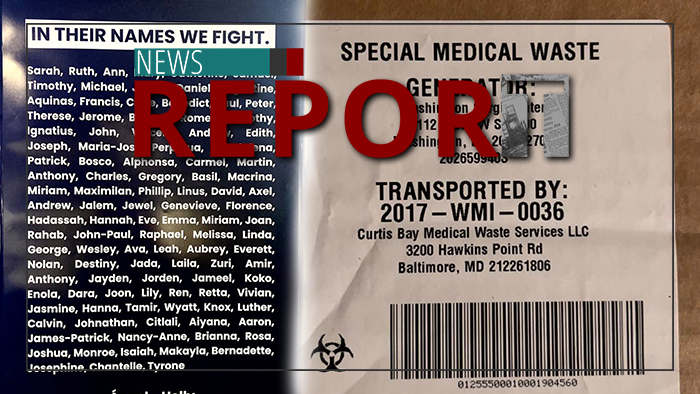 Murder in the capital

Pro-life activists recently recovered the remains of aborted babies in Washington, D.C., and, now, politicians and police are getting involved.

A pro-life group in Washington, D.C., is speaking out after it obtained the remains of 115 murdered babies.

Dr. Cesare Santangelo operates the abortion mill and has a history of medical malpractice.

The pro-life activists gave almost all the children Catholic burials. They kept five of the infants who were full term and showed signs of post-birth infanticide.

Rep. Marjorie Taylor Greene, R-Ga.:  "In our nation's capital, five dead babies were delivered to police. The babies were intact, suggesting that they had been delivered alive. One of them had her skull crushed and her brain removed in a manner consistent with partial-birth abortion or infanticide."

The pro-lifers gave the children names and arranged a funeral mass for the five late-term victims.

Now, D.C. authorities have possession of the bodies (that were not buried) and are investigating the pro-lifers.

Greene: "The slaughter of innocent children is, of course, the logical endpoint to the Left's Culture of Death in which women are warmly encouraged to kill the babies they ought to be nurturing."

Washington, D.C., has no gestational limit on abortions, and city officials are claiming the children were killed in accordance with the law.

On Tuesday, 23 members of Congress wrote a joint letter to D.C.'s mayor and police chief, demanding a criminal investigation into the suspected infanticide.