Red Rose Rescues advocate for the unborn inside abortion mills

In December 2018, three pro-life activists — Fr. Stephen Imbarrato, Linda Mueller and a third, anonymous rescuer — staged a Red Rose Rescue at Washington Surgi-Clinic in Washington, D.C. They stood for almost three hours both inside and outside the abortion mill, offering love and support to the mothers in the hopes of saving the lives of their unborn children.

Despite being arrested for trespassing, on Jan. 29, a federal judge dropped the charges for the three pro-life activists after a prosecutor refused to pursue the case.

Church Militant spoke with Fr. Imbarrato, one of the pro-lifers arrested during the Red Rose Rescue, who said they never received any indication as to why.

"We did have one police officer posit the possibility that the prosecutors understand our motives and that we are peaceful," Fr. Imbarrato said.

As a long-time advocate for the unborn with Priests for Life and Protest Child Killing, he said, "The mission of the Red Rose Rescues was always to save babies from abortion by witnessing to their moms inside abortion facilities where there is little to no access to the moms outside the facility."

Monica Miller, the national director of Citizens for a Pro-Life Society and one of the founders of the Red Rose Rescues, told Church Militant, "Any time that a pro-lifer, or really anyone defies an unjust law for the sake of doing right, then charges are never filed against us, or the charges are dismissed, that is always a good thing!"

She explained it means people are not penalized for doing what is morally right and "those in the judicial system do not become entangled in doing evil."

This is the fourth Red Rose Rescue performed in Washington, D.C. since they began doing rescues inside abortion mills in September 2017. Two Red Rose Rescues were also conducted at Capital Women's Services, one in May 2018 and another in July 2018. Only one of the Red Rose Rescues resulted in charges.

Aside from this trial, two of the women who participated in the May rescue were not even charged, despite one of them telling police her name was "Baby Jane Doe." The charges against a third participant were dropped without explanation.

Government witnesses failed to show up for the trial for the July Red Rose Rescue.

For his participation in the first Red Rose Rescue in December 2017, Fr. Imbarrato spent seven days in jail. He refused to pay the fine and accept probation.

"I have come to the conclusion that my voice for the babies becomes greatest if I, as a Catholic priest, is in jail," he explained.

Father Imbarrato has been advocating for the unborn and a Personhood Presidential Order with the Trump administration since 2017 when he distributed ashes to Kellyanne Conway on Ash Wednesday. That order, if signed by President Trump, would require government agencies to recognize "the personhood of the unborn and protect their full legal status as Americans."

The lack of charges somewhat frustrates Fr. Imbarrato's plan for pushing for constitutional personhood through the courts.

Despite the abortion mill's manager testifying that over half of the patients did not show up for their appointments that day and could not be reached for rescheduling, Barron, of the 48th District Court of Michigan, could not attribute the loss of revenue solely to the rescuers. A legal protest was also being held on the sidewalk the day of the rescue.

He also noted that there was "no basis" for restitution.

"D.C. deals with protests and protests all the time," Fr. Imbarrato said. He said one officer told them there were 45 known protests going on in the city that day. "They have a different perspective than podunk U.S.A. where the Judge Barrons preside."

Miller agreed, saying, "Everything depends on the local court, the judge before whom we are brought." She said the fact is that some jurisdictions are much harsher than others and "that's what we experienced in Oakland County's 48th District."

Sad to say, babies are just as dead in a country that might not be as harsh.

Miller said in some ways, it makes sense to do rescues where they will not be so poorly treated, "But I think we need to be careful that the consequences to us are not all that dictates where we do a Red Rose Rescue."

"Sad to say, babies are just as dead in a country that might not be as harsh," she explained.

Washington Sugi-Clinic offers abortions up to 27-weeks gestation — well past the limit of viability of 21–22 weeks — and is owned by abortionist Cesare Santangelo. Father Imbarrato was aware of the "notorious" history of the facility and chose to do a rescue there to see if charges would be filed.

Santangelo was named in a 2011 medical malpractice and wrongful death lawsuit after Rebecca Carey Charland died after receiving treatment for a miscarriage that is very similar to a late-term abortion.

Santangelo was also featured in one of a series of undercover videos by Live Action that attempted to show the willingness of the abortion mill workers to violate the Born Alive Infant Protection Act. Passed in 2002, it requires any baby surviving an attempted abortion to be given legal protections and life-saving help.

"There's a theme of infanticide or the willingness to commit infanticide," explained Lila Rose, founder of Live Action, in a 2013 interview with CNN. Similar to what was exposed during the trial of the notorious late-term abortionist Hermit Gosnell, Rose wanted to draw attention to the "vastly unregulated [abortion] industry."

Miller explained that the charges could have been dropped because the abortionists "do not want to come to court and have their operation exposed for what it is."

Miller said their aim is not just to advance a defense of others in court, their first goal is to "save the babies, be there for the mothers and defend the babies whose mothers still opt to put them to death."

She continued to say if they are taken to court, then "we will do all that we can to advocate for the victims in the legal system."

"We really had such a beautiful opportunity to witness to the sanctuary of life before the judge, the jury, the prosecutors, the media and all the pro-abortion people who had to listen to us," she added.

"All that we endured was a true blessing, I mean everything," Miller said. "I would do it all over again if God wills it!"

"It is important to expand Red Rose Rescues," Miller said. "We would love to see many of them take place all over the United States."

The first Red Rose Rescue at a Planned Parenthood facility was held in Trenton, New Jersey on Dec. 22. Father Fidelis Moscinski, William Goodman, Patrice Woodward and Matthew Connolly were arrested for trespassing during that rescue. The date of their trial has not been confirmed.

Church Militant reached out to the United States attorney's office but has not heard back via press time. 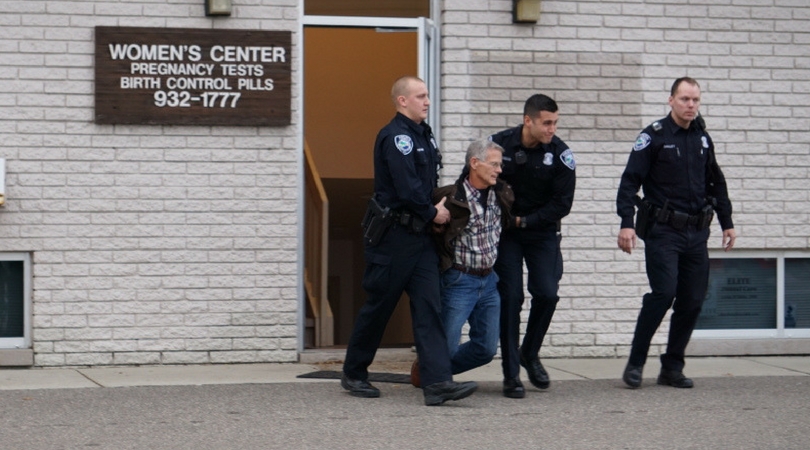