WASHINGTON (ChurchMilitant.com) - For the second time in as many months, concerned laity conducted a rally in front of the papal nunciature in Washington, D.C. As reported by Church Militant, the Feb. 16 rally was conducted by the group Catholic Laity for Orthodox Bishops and Reform. 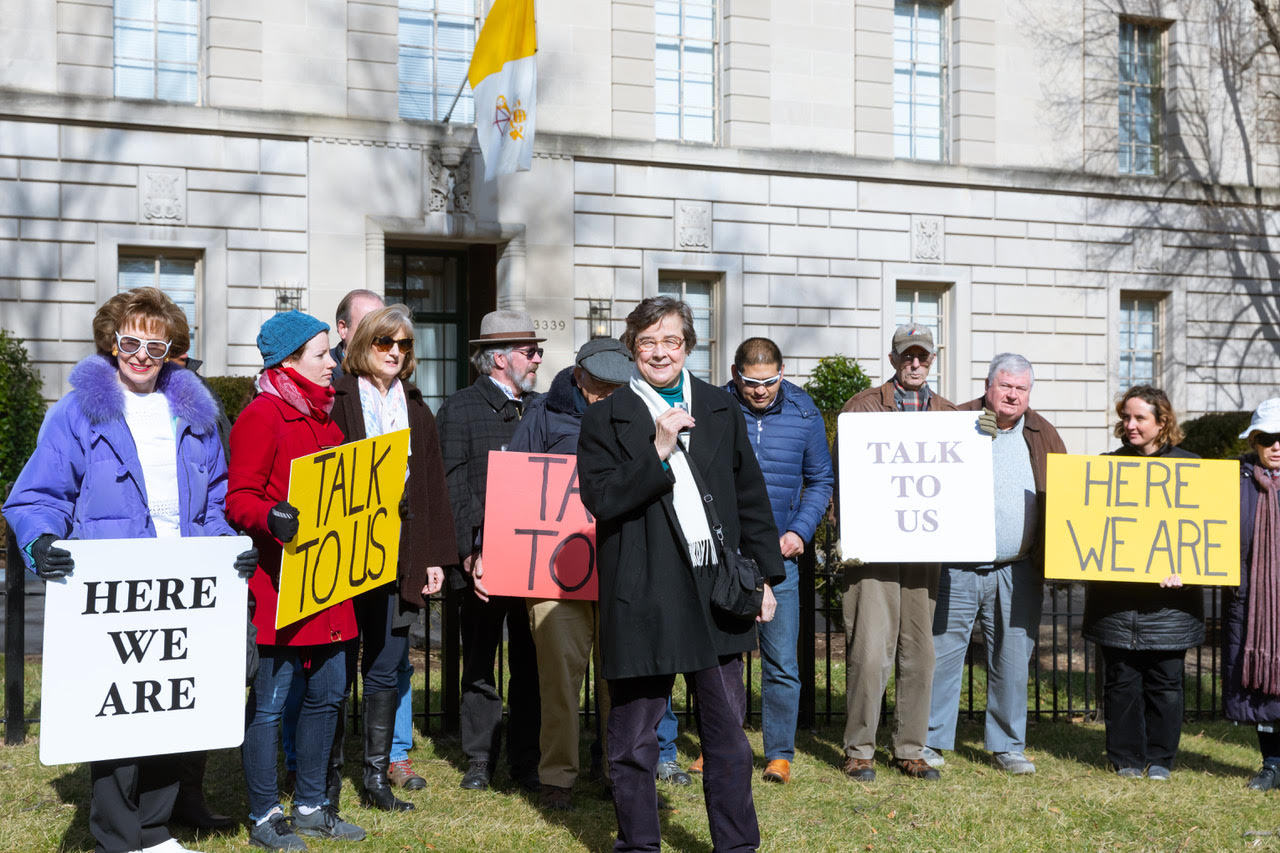 "The first purpose of the rally was to pray the Rosary for the appointment of a worthy shepherd for the archdiocese of Washington, which has been without an archbishop since early October," Donna Bethell, an event organizer, told Church Militant.

Bethell explained what led to the formation of Catholic Laity and the monthly rallies: "The Pope accepted the resignation of Cardinal Archbishop Donald W. Wuerl after he lost the confidence of the priests and people of the archdiocese, due to the revelations in the Pennsylvania grand jury report about then-Bishop Wuerl's actions when he was bishop of Pittsburgh." 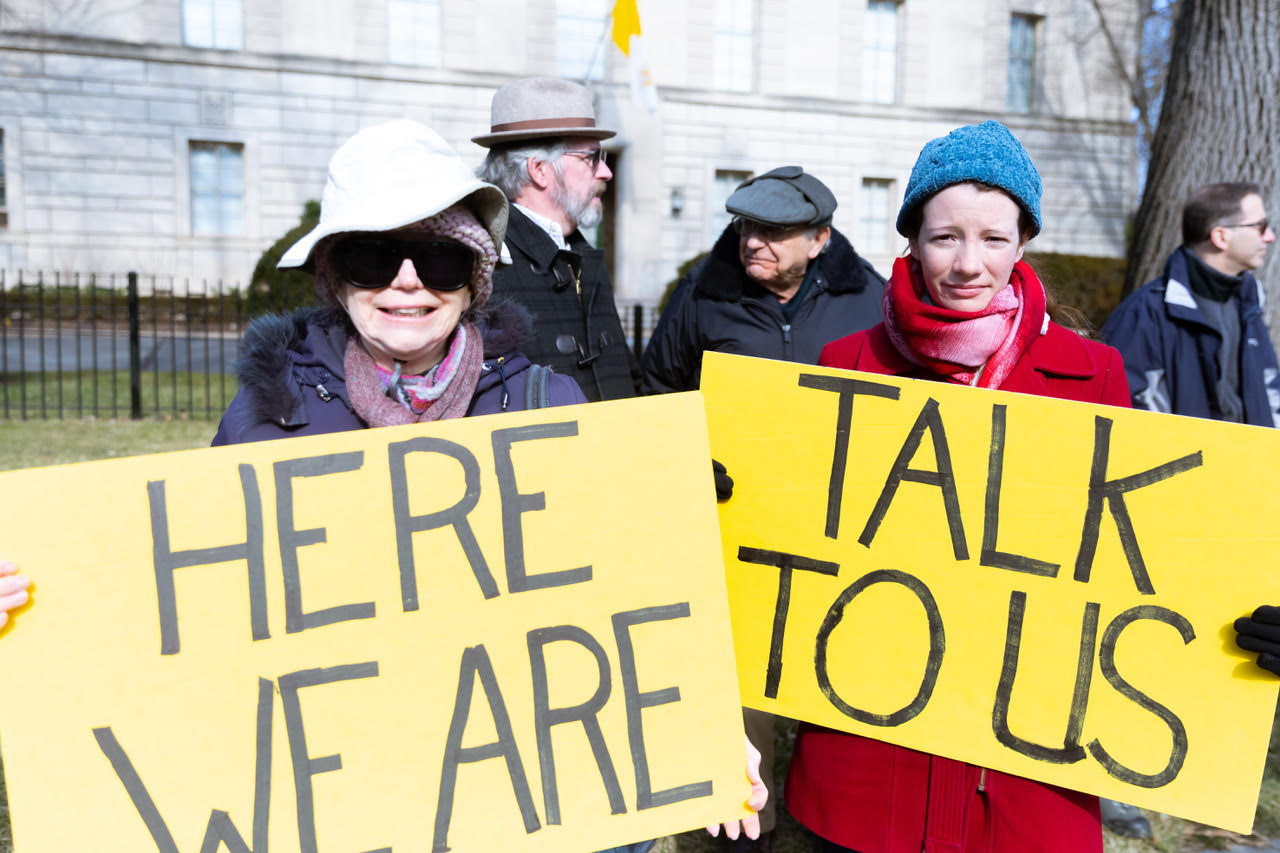 The second purpose of the rally was to deliver a letter to the nuncio, Archbishop Christophe Pierre, asking for the leadership of Catholic Laity to meet with him to discuss the appointment of the next archbishop of Washington. Catholic Laity has written the nuncio with this request each month since October but has received no response. The letter we delivered at the rally was our fifth attempt.

Catholic Laity co-founder Winnie Obike explained at the rally that the archdiocese of Washington is not only without an archbishop but it has lost the "canopy of grace" that should have been provided by its two previous archbishops.Also on Feb. 16, the Congregation for the Doctrine of the Faith published a statement announcing that ex-Cardinal Theodore McCarrick, the archbishop emeritus of Washington, had been dismissed from the clerical state for his sexual abuse of minors and adults. 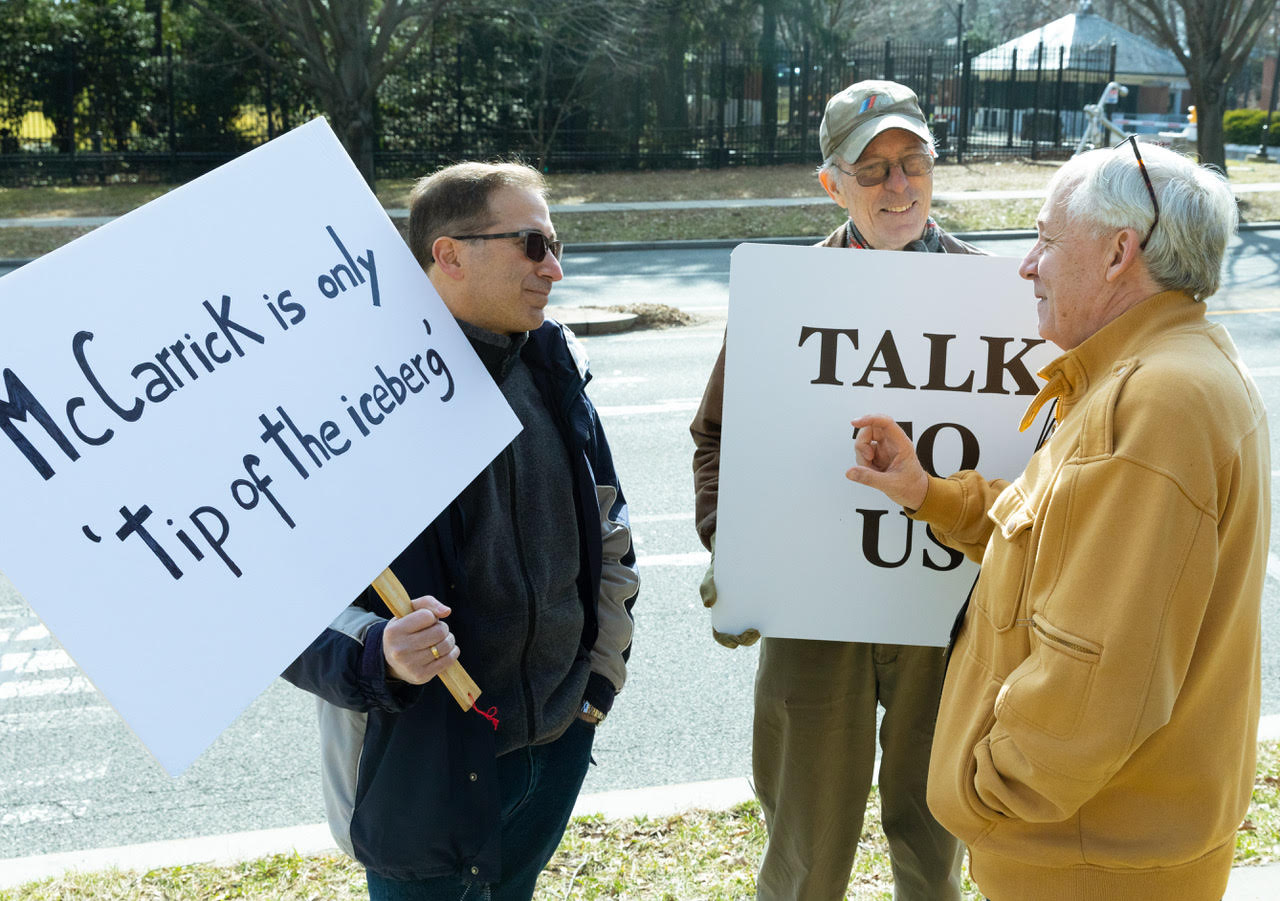 "It's a special thing when your archbishop is also a cardinal, because it connects you to Rome in a very special way with a very special bond," said Obike in her address to the group. "It connects us to the Church universal. But that bond has been broken; that bond no longer exists."

Obike provided witness to the harm that has been done to many young Catholics like her because of the failures of the clergy:

Not only are we hurting as secondary victims of the clergy sex abuse scandal, we are hurting because when we try to reach out to the hierarchy and representatives of the Vatican here in Washington, we are met with a wall of silence. We see throughout the world the regime of silence is continuing to topple. It's toppling in government, in politics and it's also toppling in churches. ... Please meet with us. We the laity can be part of the solution, and we want to be part of that solution. We are tired of having our canopy of grace ripped apart, and we are tired of being attacked by all infernal spirits and all kinds of false ideologies and false doctrines because of a lack of a bishop here in Washington. So we are asking to please meet with us so we can offer our suggestions about whom and what would make for good criteria for a good archbishop for Washington.

Obike is a mother of two and is expecting her third child this spring. She petitioned for the removal of Cdl. Wuerl last August "because, as a young Catholic, looking at fellow Catholics my own age, I'm 29, and seeing the damage of the Pennsylvania grand jury report on our faith and our ability to maintain that faith, I was very devastated."

When we try to reach out to the hierarchy and representatives of the Vatican here in Washington, we are met with a wall of silence.

In addition to the immediate need for an archbishop in Washington, Catholic Laity also expressed its desire to discuss with the nuncio the broader and permanent need for channels of communication between the laity and the hierarchy, including the Holy See. As the nuncio is the representative of the Pope to the bishops and people of the United States, he is the principal conduit of information to the Holy See about Catholic life here. This need is also in the letter to the nuncio.

The rally was attended by about 20 laymen and several media representatives, including the Associated Press and the local NBC TV affiliate, which carried the rally as part of a story on the McCarrick case. A reporter from LifeSiteNews also attended.

A video of the rally is available on the Catholic Laity website, in addition to a Feb. 15 Ave Maria/EWTN interview with Donna Bethell.