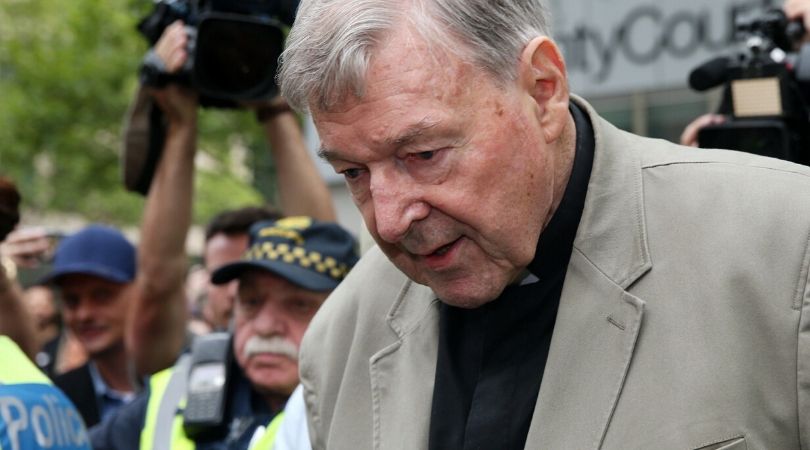 On Monday, Deacon Nick Donnelly pleaded with supporters on Twitter to "show your support for Cardinal Pell by sending him a Christmas card."

Donnelly provided his followers with the address of the Melbourne Assessment Prison where Pell is currently incarcerated. He also told those sending cards not to address the envelope using Cdl. Pell’s ecclesiastical title or the card would be refused.

DO NOT address his envelope as 'Cardinal Pell' or it will be refused pic.twitter.com/jsKxvBNofb

“You must address him as George Pell on the envelope, but in your letter ‘His Eminence’ will be accepted by the authorities,” noted the outspoken deacon from the diocese of Lancaster.

While many Catholics thanked Donnelly for his appeal and said they would respond — one even asking if he could visit Cdl. Pell in prison around Christmas — a number of secular responses were abusive and hateful.

Australian P.K. Callan replied by racially and physically threatening Donnelly: “I can assure you, Englishman, your fervor to champion such a repellent example of man’s lust for power and riches over human lives will get your noggin smashed in, should you ever pop by Ballarat.”

Donnelly, a staunch supporter of Cdl. Pell, told Church Militant he continued to “defend Cdl. Pell because it was impossible for him to get a fair trial in Australia due to the campaign of hate against him whipped up by the media.”

He said he couldn’t rest “knowing that an innocent cardinal is in jail for a crime that was impossible to commit.”

The deacon explained how Pell “was convicted on the uncorroborated complaints of one anonymous person, whose allegations were not only contradicted by over 20 witnesses but also by the other former choir boy who insisted on two occasions before his death that he had not been sexually abused by Cdl. Pell.”

Moreover, Justice Mark Weinberg, one of Australia’s most senior criminal lawyers, had concluded that the complainant’s testimony was contradictory and unreliable.

The British tabloid Daily Mail attacked Donnelly for his support of Pell, calling his tweet “bizarre” and insisting that Pell is a “convicted paedophile.”

Australian 7News said that Donnelly’s message had drawn criticism from Melbourne-based victim support group In Good Faith Foundation. Its Chief Executive Officer, Clare Leaney, told 7News she wholeheartedly hoped no victims of sexual abuse saw the tweet: “For a lot of survivors of abuse, there is no holiday period. That’s been taken away from them."

But Donnelly pointed out that the real reason for the 30-year campaign of vilification against Pell was “because he upheld Church teaching about the immorality of homosexual acts and refused Holy Communion to LGBT militants.”

“He is one of the few bishops in the world with the courage to proclaim the unvarnished truth of Catholic doctrine. Many of the offensive messages I’ve received are from LGBT activists and supporters,” Donnelly told Church Militant.

Donnelly spent part of his childhood growing up in the State of Victoria and said that gave him a sense of affinity to the Australian prelate.

Victorian Premier Dan Andrews, who identifies as a “devout Christian,” lashed out at Abbot, calling his visit to Pell “absolutely shameful,” even apologizing on Australian television to the abuse victims on Abbot’s behalf.

Donnelly said the media had demonised Abbot for his visit to Pell: “Just look at the hostile press former PM Tony Abbot received for visiting Cdl. Pell in prison this week. And they’ve attempted to demonize me for suggesting people send Cdl. Pell Christmas cards, adding: “This is all part of a campaign to intimidate ordinary Catholics from publicly questioning Cdl. Pell’s scandalously unjust conviction.”

“But the harder they attack me, the more determined I am to support Cdl. Pell. I’ll be posting a meme every day during Advent drawing on the writings of His Eminence. His voice should not be silenced,” Donnelly insisted.

On Wednesday, responding to Andrews’ attack on Abbot, Sky News host Andrew Bolt said that Abbot was “visiting a man he is convinced is innocent, as I do.”

“You probably know I’m not a Christian, I’m agnostic, but I do want to point out a passage in the Bible ... that has inspired so many people to act with mercy. Christ did something that could civilize even Abbot’s haters, if they could open their ears and their hearts,” Bolt remarked.

“Now I wonder, how can it be shameful that Tony Abbot lives by those magnificent words of Jesus Christ,” the TV host noted.

Pell is preparing to spend his first Christmas behind bars. In March, Pell was sentenced to six years in jail after being convicted of sexually abusing two 13-year-old choirboys in 1996.

Australia’s highest court has agreed to refer Pell’s case to the full bench of the High Court. The hearing won’t be held until at least March 2020.