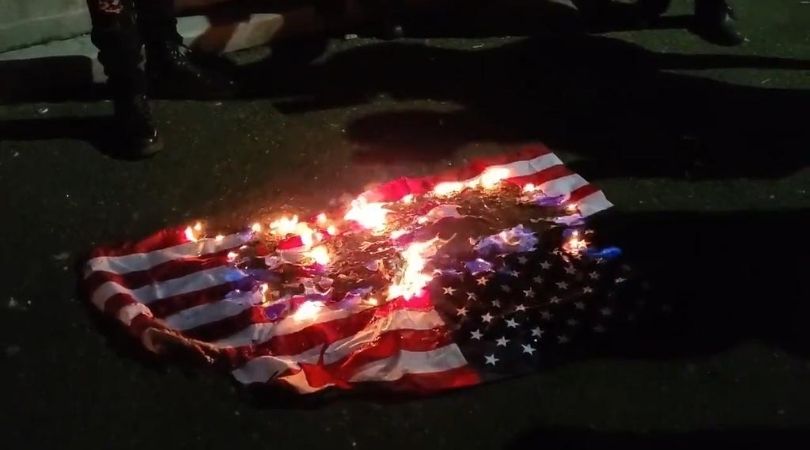 The importance of religious values in sustaining the United States

Most of us in the United States reflexively condemn the actions of China and its policy of conforming the actions of its population to the worldview of the ruling Communist Party. China has long persecuted Uyghur Muslims. Reports abound about its brutal campaign against Uyghurs and its deporting this population to concentration camps.

Lesser known, however, are their current efforts to destroy Christianity by removing crosses on churches, taking down images of religious icons such as those of Jesus and the Virgin Mary and having censors edit religious books to assure that they reflect the core values of socialism. The communists understand that religious practice and beliefs are antithetical to totalitarianism.

Surprisingly, as the radical Left gains ascendency and pushes similar events to occur within our country, its primary advocates (the mobs, the progressive politicians and the mainstream media) dismiss America's current wave of destruction as merely "peaceful protests." It is ironic that the anarchists seek to destroy a country that, unlike China, actually allows them the freedom to peacefully protest while prohibiting destruction and chaos.

But deconstructing America is precisely the goal of the anarchists. Consider, for example, the comments of Lilith Sinclair, one of the organizers of the Portland, Oregon riots — riots which have gone on nightly for more than two months. Specifically, she called for the "abolition of the United States" when talking to fellow demonstrators.

Not surprisingly, this narrative of Ms. Sinclair (a Portland activist who describes herself as a "nonbinary" sex worker and who helped organize "Occupy ICE" in 2018) has been largely ignored by the mainstream media and progressive politicians. Moreover, rather than being arrested for sedition and/or treason, she and her fellow rioters met with liberal mayor Ted Wheeler and members of Portland's city council to discuss their demands. Philosophically aligned are other radical politicians. A prime example is Rep. Ilhan Omar, who has likewise called for the dismantling of America's economic and political systems.

The rioters in America's progressive cities want us to believe in the justice of their cause. However, because they are mostly secular and despise religious values, they appear intent on destroying America's houses of worship and its religious symbols. In Portland, as symbols of their derision for religious items and American values, they burned Bibles and American flags.

Respect for religious values faces growing threats from these populations. They seek to curb religious expression and relegate religious symbols, believers and ideas either to the margins of public life or to eliminate them entirely. Consider for example:

Let us not forget how so-called progressive politicians tacitly or expressly support or at least condone these activities. Besides being strangely quiet about criticizing any of the above incidents, think back to the 2012 Democratic Convention, which shocked many of us when the delegates there booed the mention of G-d and tried to vote the Almighty out of their party platform. They again heckled the mention of G-d at the opening prayer of the 2016 Democratic Convention.

But America is not alone in experiencing this denigration of religions. Other western cultures face similar challenges. Church Militant reported that, on average, three churches are daily set ablaze in Europe. A Gatestone Institute report informs us that "The perpetrators of anti-Christian attacks — which include acts of arson, defecation, desecration, looting, mockery, profanation, Satanism, theft, urination and vandalism — are rarely caught."

As part of this derangement syndrome, ideological purges (often referred to as "cancel culture") actively silence the voices of those of us who may disagree with the views of the mob. They seek to prevent the exercise of our constitutionally guaranteed right to free speech in a variety of circumstances.

An outrageous example is a recent rally in Denver that intended to support local police. Anti-police demonstrators forcibly took the stage to chase from the platform Colorado House Republican Leader Patrick Neville and political activist Michelle Malkin. The situation devolved into a dangerous skirmish. In spite of the rally's stated intention to support police, the head of the police union revealed he was ordered to not protect the speakers and to "stand-down" by the city's progressive political leaders.

On average, three churches are daily set ablaze in Europe.

In a totally different context, Dr. Scott Jensen, a physician who serves as a Minnesota state senator is currently being investigated by his state's Board of Medical Practice because he dared to criticize the way in which COVID case numbers are counted. According to the guidelines of the government's Centers for Disease Control and Prevention (CDC), hospitals receive greater reimbursements for patients treated for COVID. The senator argued that even if someone did not die from COVID (and may not have been even treated for it) but simply tested positive for it, the institution would include the case as a COVID death and thereby receive additional funding.

Dr. Jensen's complaint upset the narrative of established medical institutions. The hospitals had an economic incentive to report inflated numbers. Parenthetically, concerning actual case numbers for the COVID crisis, in other states, a number of reports indicate that people are miscounted as "positive" for the virus even if they did not actually take the test. In addition, other reports indicate that several testing centers claimed none of their test-takers were negative for the virus, thereby contributing to an inflated number of reported cases and/or deaths.

Coronavirus has been an oft-used excuse of the politically correct crowd to derail ordinary human events with which they may disagree (while at the same time permitting gatherings that conform to their political agenda). Religious services are a prime example of this double standard. Several states such as California, Illinois, Kentucky, Maine and Virginia are actively restricting and silencing services at houses of worship. Simultaneously, however, they permit revolutionary disturbances on city streets.

Coronavirus has been an oft-used excuse of the politically correct crowd to derail events with which they may disagree.

This past June, New York City mayor Bill de Blasio canceled all large events for public health reasons through the end of September — with one glaring exception. He said, "We have to respect" Black Lives Matter protests as a "moment of change." He also denied that such gatherings would lead to an increase in cases of COVID.

This position is in direct contrast to acknowledgments of several other progressive mayors (such as those in Los Angeles, Seattle and Miami-Dade County) who, while permitting anti-police protests and riots, have conceded the gatherings, in fact, have likely led to the increased spread of coronavirus. At a recent congressional hearing, even Dr. Anthony Fauci concurred that the crowds at such protests may increase the spread of the pandemic (but inconsistently more forcefully condemned religious gatherings in churches).

Recognizing the importance to a free society of our ability to practice religion, numerous lawsuits have been filed and are pending against progressive public officials who ban religious services. These public officials declare religious services "non-essential." At the same time, they inconsistently permit other types of gatherings (such as casino gambling in Nevada) by classifying them as "essential."

Fundamentally, all areas of a given society's social policy are shaped by the worldview of its citizens. We who believe in the Judeo-Christian worldview recognize that religious values are the bulwark against a type of totalitarianism that seeks to destroy the freedoms of our culture.

In contrast, antagonists believe it is obsolete to consider the Judeo-Christian worldview as an integral part of America's democracy. They assume that the material world is "all there is." The secularists believe that the rights of mankind come from the generosity of the State as opposed to originating in the will of G-d. This secular view forgets our religious roots, roots that not only formed our society but also helped stabilize it.

Religious adherents believe the foundation of our physical world is the ongoing creative and sustaining act of an all-powerful Being, i.e., G-d. We seek to follow His moral views as illustrated by the Ten Commandments and as detailed more fully in the Bible. This worldview perceives G-d as the Creator of the world and perceives the human being as having a soul that is made in the image of G-d.

Organized religion is critical both to the establishment of a moral compass and the maintenance of public morality.

While the nation's religious adherents disagree concerning some basic theological questions, all theists believe something significant in common — in an ultimate, other-than-human order, an order which makes a difference in their lives and in the societies wherein they live.

Republics like America cannot flourish in a moral vacuum. Organized religion is critical to the establishment of both a moral compass and the maintenance of public morality. George Washington, our founding president, explained that "Reason and experience both forbid us to expect that national morality can prevail in exclusion of religious principle."

Without a doubt, societies that provide ample breathing room for the natural and pervasive religious tendencies of man will continue to be more prosperous, freer, less-divisive and less-violent societies. This is a lesson we need to take to heart in today's troubled times.

Arthur Goldberg founded the Jewish Institute for Global Awareness, an organization advocating the Judeo-Christian worldview (the Noahide Code) and FundingMorality.com, a crowdfunding site that provided an alternative fundraising platform for pro-life, pro-family causes. The two sites were shut down by court order and ordered Goldberg to pay $3 million after the Southern Poverty Law Center targeted Goldberg in a lawsuit. Goldberg is fighting the ruling, and individuals may donate to his legal fund here.