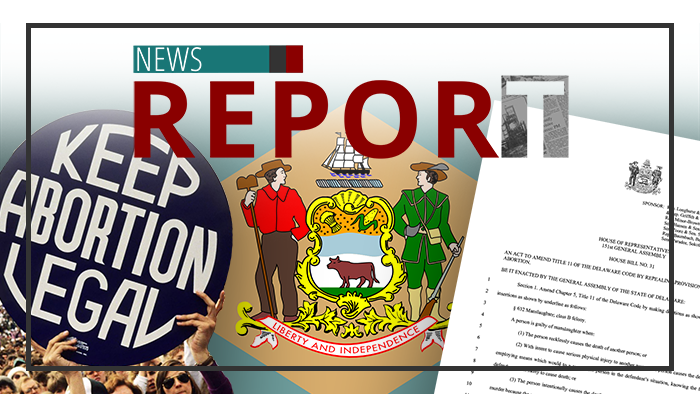 Ridding the state of all barriers

Pro-abortionists in Delaware are purging the books of abortion laws that could be used to save the unborn.

Preparing for a worst-case scenario — the reversal of Roe v. Wade — Delaware's radical pro-abortion lawmakers are scouring the criminal code for any abortion-related laws in need of repeal.

Moira Sheridan, president of Delaware Right to Life, is on the front lines of the state's abortion battle.

Sheridan: "There's a preponderance of progressive Democrats who are working and pushing, and they are relentless — and have been relentless for years — in protecting abortion in Delaware."

Those Democrats are now putting forward House Bill 31, which would repeal a 19th-century statute that classifies abortion as a felony.

The law was revised in its current form as recently as 1972, only months before Roe v. Wade.

Most states repealed these laws after the historic Supreme Court decision, but Delaware is one of 10 states that didn't.

Ruth Lytle-Barnaby, president of Delaware Planned Parenthood, told the Dover Post, "Even though right now I don't think the criminal code issues are enforceable, it doesn't mean that if Roe were overturned that that couldn't be a question at some point."

With a 6–3 conservative majority on the Supreme Court, there is a growing fear Roe v. Wade is in jeopardy.

That fear was evident during Amy Coney Barrett's 2017 confirmation hearings for the 7th Circuit Court of Appeals.

Sen. Dianne Feinstein: "The dogma lives loudly within you [Amy]."

During Brett Kavanaugh's 2018 confirmation hearings, it was clear Democrats believed everything was on the line.

Then-senator Kamala Harris: "How can you not remember whether or not you had a conversation about Robert Mueller or his investigation with anyone at that law firm? This investigation has only been going on for so long, sir, so please answer the question."

It's likely HB 31 will pass easily this year, maintaining Delaware's reputation as an abortion-destination state.