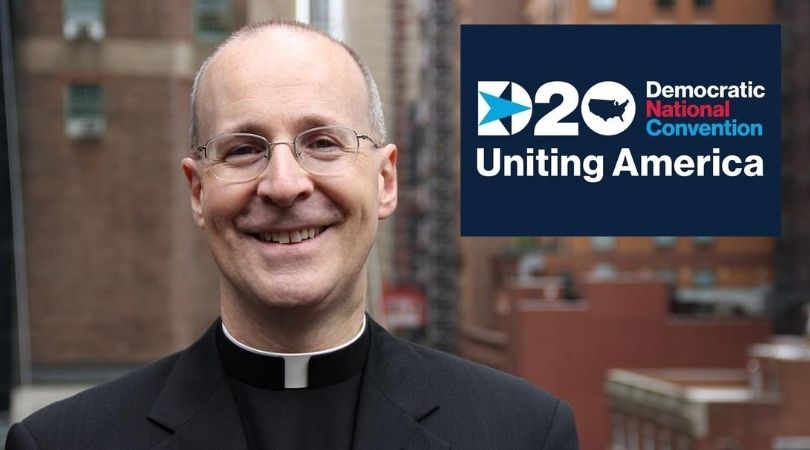 The Democrat convention, scheduled for Monday through Thursday of this week, will feature leftist Catholics and Protestants in a bid to boost Dems' dubious religious credentials.

The press release from the Democratic National Convention Committee (DNCC) describes Fr. Martin: "The Rev. James Martin, SJ, is a Jesuit priest, editor at large of America [Magazine], and the author of many books, including Jesus: A Pilgrimage, The Jesuit Guide, and the forthcoming Learning to Pray."

Martin will be featured during the pinnacle of the convention, after former vice president Biden, the then-official Democrat nominee for president, accepts his nomination.

Fr. James Martin's ambiguous language and attempts to ignore the Church's doctrine on homosexual acts keep him out of step with authentic Catholic Tradition and official Church teaching.

Martin will be joined by Rabbi Berkun, a female rabbi who is vice president of the Shalom Hartman Institute of North America, and Imam Dr. Al-Hajj Talib Abdur-Rashid, who is described as a "Muslim faith-based social justice activist ... [who] has been the religious and spiritual leader of the Mosque of Islamic Brotherhood, Inc."

One challenge of the DNCC was to tap media-prominent clergy and other so-called religious leaders of the major faiths of the United States who align with the party of death's official platform. The official draft of the Democratic Party Platform 2020 includes the following:

Bishop Mariann Budde, the Episcopal woman who criticized President Donald Trump after he held a Bible for a photo in front of the historical St. John's Church in Washington, D.C., will offer the benediction on Tuesday. She is the bishop of the Episcopalian Washington, D.C. diocese, where the church was set on fire by looters and arsonists.

Budde criticized the president after his visit to the seared church.

"He took the symbols sacred to our tradition and stood in front of a house of prayer in full expectation that would be a celebratory moment," Budde lamented. The public criticism earned her the national spotlight on Tuesday evening.

Along with Martin, Catholic sister Simone Campbell, executive director of the social justice advocacy lobbying group Network, will be speaking on Thursday. Her invocation will kick off the agenda Thursday evening. She is a longtime ally of Biden, dating back to the push to pass Obamacare in 2010.

Campbell is introduced in the Democratic convention press release as follows:

Sister Simone is the executive director of Network Lobby for Catholic Social Justice — a federal advocacy organization founded by Catholic sisters to lobby in Washington, D.C. for policies that mend the gaps in income and wealth in the United States. She has also led six cross-country "Nuns on the Bus" trips focused on tax justice, health care, economic justice, comprehensive immigration reform, voter turnout, bridging divides in politics and society and mending the gaps.

Other clerics participating in the 2020 Democratic National Convention include Greek Orthodox archbishop Elpidophoros (who is an active member of the World Council of Churches), Pastor Jerry Young, a Baptist minister from Mississippi and the 18th president of the National Baptist Convention, USA, Inc. and Rev. Dr. Gabriel Salguero, the president and founder of the National Latino Evangelical Coalition (NLEC) and pastor of the Gathering Place in Orlando, Florida.

NLEC considers itself non-partisan. Its stated mission, found on its Facebook page, states, "The aim is to both provide alternative voices to the existing partisan voices and to create national awareness about the growing number of Latino evangelicals who are not captive to partisan politics."

Before the convention, Democrats came together Sunday for an interfaith service to show their spiritual solidarity. Josh Dickson, national faith engagement director at Biden for President, had this message for the nation: "The world will see what Joe Biden's America will look like: a nation united, not divided, by our differences."

Martin, seemingly representing Catholicism for the national Democrats, is well known for his defense of homosexuality and for his pastoral incentives for what he calls the "LGBT community." His ambiguous language and attempts to ignore the Church's doctrine on homosexual acts keep him out of step with authentic Catholic Tradition and official Church teaching.

It is interesting to note, however, that Fr. Frank Pavone of Priests for Life has been asked to refrain from political activity in an advisory position for the Trump campaign, but no word yet has been heard on Martin's role at the Democratic convention.