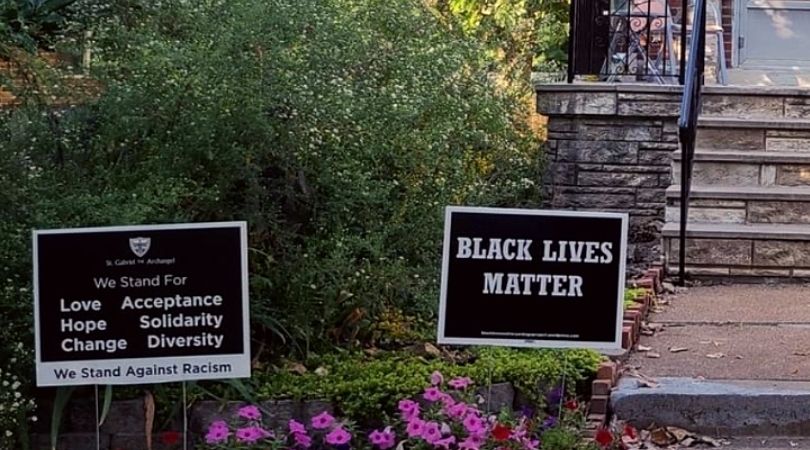 "The signs are meant to be a proclamation from our community to respect the dignity of life and to oppose any racist views that subjugate others," Shamleffer wrote. "Yard signs will be available starting this Saturday."

The signs similar to those used by Black Lives Matter (BLM) were an initiative of the parish and pastoral council committee on racial dignity.

They include the St. Gabriel the Archangel parish logo and read:

The resemblance to BLM yard signs was apparent. A parishioner believed the connection was obvious, saying the signs were "in their own way supporting Black Lives Matter."

The individual reported that others in the neighborhood also saw the signs as an extension of BLM: "One neighborhood home even has a Black Lives Matter sign next to its parish sign that reads: 'St. Gabriel the Archangel, We Stand For: Love, Acceptance, Hope Solidarity, Change, Diversity.' The connotation of 'change' during this political season is appalling to me."

Another observer wondered if the signs were trying to provide a measure of security for the homeowners who displayed them. He also noted that none of the parish signs spoke out against abortion even though black children are disproportionately killed in the womb.

Rev. John Vogler called the fight against abortion an 'easy issue for lazy moral and political leaders to jump on.'

The signs' language, taken out of context, is innocent enough; but given Democrats' seeming use of race-baiting, some of the words have taken on a highly charged political meaning.

The parish might be given the benefit of the doubt because its bulletin promotes the Annual Life Chain as well as 40 Days for Life. But it also promotes an eight-week study group called, "Faith and Racial Equity: Exploring Power and Privilege."

According to the bulletin description, the JustFaith Ministries module "awakens groups to the economic systems, public policies, cultural norms, and hidden biases that empower some and oppress others."

JustFaith Ministries' founder Jack Jezreel spent six years in a Catholic Worker community, and in 2014 was awarded the Anselm Moons Award from Franciscan Mission Service for his "unwavering dedication to transforming the North American Church through lay formation that encourages social mission."

An individual connected with the program told Church Militant that three other St. Louis parishes are participating racially charged program: St. Joan of Arc, Our Lady of Sorrows, and St. Raphael the Archangel.

Another St. Louis priest pushed his political agenda in a letter to the editor published earlier this month in the St. Louis Post Dispatch. Rev. John Vogler called the fight against abortion an "easy issue for lazy moral and political leaders to jump on."

He specifically noted that he was writing from a Catholic perspective and then went on to promote the so-called seamless garment response that refuses to categorize abortion as a grave evil that should be prioritized over, for example, climate change.

"I am a Catholic priest who (long before Donald Trump) has insisted that 'pro-life' is a whole lot more than just being anti-abortion," Vogler wrote. "Issues like war and global warming — not to mention fair distribution of profits, starving children and capital punishment — are more than equal to the tragedy and horror of abortion."

St. Margaret of Scotland parish hopped on the BLM bandwagon and organized a demonstration along a major St. Louis thoroughfare.

Along similar lines, in June, shortly after George Floyd died in police custody, St. Margaret of Scotland parish hopped on the BLM bandwagon and organized a demonstration along a major St. Louis thoroughfare. The diocesan newspaper featured the demonstration, including photos of parishioners carrying BLM signs.

Among the parishioners pictured was Arsenia Tate, the parish school's director of inclusion, diversity and equity. Tate, her two children were shown holding BLM signs. The photo caption noted that "the protest was sponsored by the social equity team of the Living Justice Commission at the parish."

A photo of the parish's priest, Fr. Matthew O'Toole, was included in the story. Unlike other parishioners in the story, O'Toole was not holding a BLM sign.

It is possible these priests are well-intentioned but ill-informed about the political agenda behind the activities they are promoting. At best, they are unwitting accomplices of powerful forces that have evil intentions for the Church and for humanity.