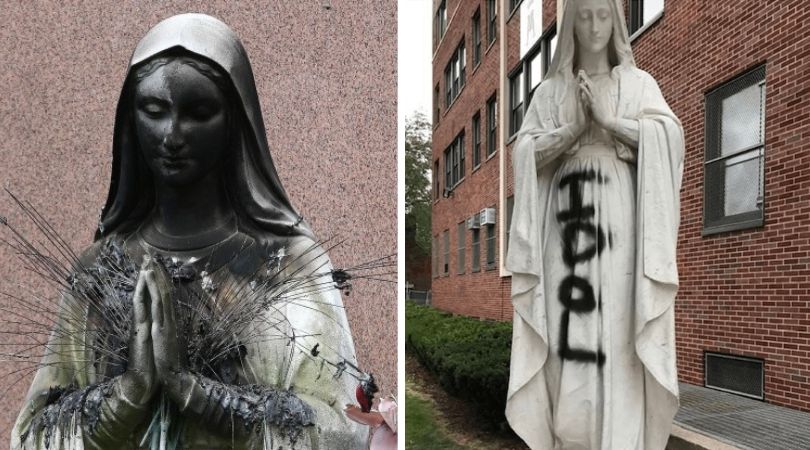 Attacking Christ and His Church

MIAMI (ChurchMilitant.com) - Marxist mobs are desecrating images of Jesus, Mary and the saints.

A statue of Jesus Christ was decapitated in Good Shepherd Catholic Church in the West Kendall district of Miami, Florida Wednesday morning. Deacon Edivaldo da Saliva found it toppled off its pedestal.

"This morning I found it on the ground, and we presume that it is vandalism," said da Saliva. "We have seen this happening all over the country."

The archdiocese of Miami told local news they expect police to "Investigate this desecration as a hate crime. This is another attack on the Catholic Church which is happening across the country."

A string of attacks on Catholic statues and churches in the past week have exponentially increased the violence targeted against the Catholic Church, and the mainstream media is largely ignoring it.

In New Haven, Connecticut on Thursday, the Church building of St. Mary's parish was defaced with satanic symbols, according to church officials.

Father John Paul Walker, the pastor, wrote in a Facebook post that the church was vandalized sometime between 9 p.m. and 6 a.m. Walker reported that "words and various symbols including a satanic one were painted on the outside doors of the church."

The mainstream media is largely ignoring it.

"I would ask everyone in the parish to pray to Our Lord in reparation for this sacrilege, and to St. Michael for protection against all the powers of hell," Walker requested. "Please pray, too, for the perpetrator of this action, who is clearly a very disturbed individual in need of serious help."

Bishop Richard Stika of Knoxville, Tennessee reported on Monday that a statue of the Blessed Virgin Mary in Chattanooga was beheaded.

"What a strange time [we live in]. Over the weekend, an outdoor statue of the Blessed Mother was beheaded at St. Stephen Parish in Chattanooga," said Stika.

On Saturday morning, Fr. Manuel Perez, pastor of St. Stephen Catholic Church in Chattanooga, was walking the church grounds when he found the statue of the Blessed Virgin Mary knocked over. Upon closer inspection, he noticed the head of the statue was missing, although the body and pedestal remained.

Jim Wogan, director of communications for the diocese of Knoxville, reported, "Fr. Perez said that he looked around the church grounds to see if he could find a missing head and he couldn't locate it." No other damage was found to the five-foot statue, whose value is estimated at around $2,000.

On Saturday night, Boston police investigated an arson attack on a statue of the Blessed Virgin Mary, the second attack on a statue of Mary in two days. This one happened in a Dorchester neighborhood of Boston, at St. Peter's Parish. Local police and firefighters responded to reports that someone had set fire to plastic flowers in the hands of Mary's statue, causing smoke and flame damage to the face, head, and upper body.

In another incident on Saturday, a Catholic church in Florida was set aflame. Local sheriffs were called to Queen of Peace Church in Ocala. Parishioners had been inside preparing for morning Mass while it was set on fire. Later, Stephen Anthony Shields, 24, was arrested and charged with attempted murder, arson, burglary and evading arrest, after admitting to the crime.

According to a statement from the sheriff's office on Saturday, Shields crashed his minivan through the parish's front door and then poured gasoline in the foyer and ignited it. He drove away, leading officers on a short chase. According to local media, Shields told police he has been diagnosed with schizophrenia but is not currently taking prescribed medication.

And again on Saturday, a fire ravaged the San Gabriel Mission in the archdiocese of Los Angeles, a 249-year-old mission founded by St. Junípero Serra. Statues of Serra, as has been reported by Church Militant, have also been destroyed and threatened by Marxist mobs. Archbishop of Los Angeles José Gomez called the mission the "historic cornerstone and the spiritual heart of Los Angeles and the Catholic community here."

Last Friday, the diocese of Brooklyn, N.Y. announced that New York City police were investigating the vandalization of another statue of the Virgin Mary at Cathedral Preparatory School and Seminary in Queens. Security footage shows someone approaching the 100-year-old statue shortly after 3 a.m. Friday morning and daubing the word "IDOL" down its length.

Father James Kuroly, rector and president of Cathedral Prep, called the incident "an act of hatred."

"Obviously, this tragedy saddens us deeply, but it also renews our hope and faith in the Lord as He has shown His goodness in the many people who have already reached out to us," said Kuroly. "We are sincerely grateful for the help we have received as well as the prayers. Please continue praying for those who committed this act of vandalism and hatred toward Our Lady and the Church."

In a non-Catholic incident this past weekend, San Diego police officials reported that a fire at Calvary Baptist church at 12:30 a.m. Sunday morning was "suspicious" and is being investigated.

Complicit Clergy has created a helpful interactive map that illustrates the extent of the increasing violence against the Catholic Church. A total of 32 incidents have been recorded thus far across the United States and Canada.