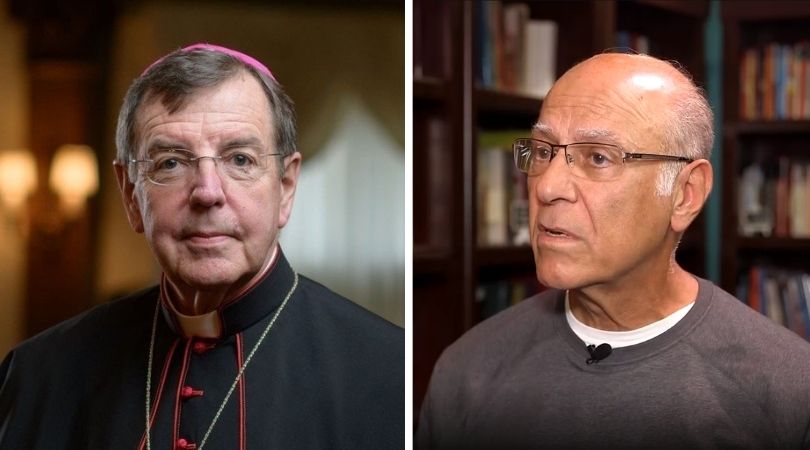 DETROIT (ChurchMilitant.com) - Despite winning a major victory in the Vatican, a Detroit priest will soon be facing disciplinary proceedings from his archbishop.

According to a statement issued by the archdiocese Tuesday, Rome's Congregation for the Doctrine of the Faith (CDF) has decided "not to proceed" in the abuse investigation of Fr. Eduard Perrone, after determining there was no substance to the allegations.

"Therefore, no further action can be taken in this case under church law," the archdiocese noted.

"In canon law, that's not just a victory; that's a grand-slam homerun," said Chris Kolomjec, civil attorney for Fr. Perrone, in comments to Church Militant. "It means Rome, the Congregation for the Doctrine of the Faith, denied, refused the archdiocese of Detroit the permission to prosecute Fr. Perrone."

They've got to have something to control their priests with. They're worried that every priest will fight back now.

"It's the equivalent of a police officer or detective bringing a case to a prosecutor and getting told, 'There's no evidence here; go away,'" he explained.

Kolomjec said Fr. Perrone is "ecstatic and relieved" with the outcome. "He trusts the process as it relates to the Vatican, but that's as far as it goes," Kolomjec added, alluding to a phrase repeatedly used by Msgr. Michael Bugarin, the archdiocesan priest who has spearheaded Perrone's prosecution.

In comments to Church Militant, Fr. Perrone said, "While I certainly would have preferred being reinstated immediately, nevertheless I will use this opportunity forced upon me by the Archdiocese to defend myself in my actions and to expose the malfeasance of the monsignor."

"It may be the greater good which will come forth from all of this," he added."

In spite of Perrone's vindication in Rome, the archdiocese said it would launch a canonical trial against him: "[T]he CDF acknowledged that due to Fr. Perrone's purported actions during the investigation, the archdiocese has the authority to address his conduct through the means available under the Code of Canon Law. As a result, a canonical disciplinary process has begun."

It remains unclear what particular "actions" the statement is referring to, nor what type of disciplinary measures the archdiocese is pursuing. Church Militant contacted spokesman Ned McGrath, who did not return a request for comment.

The statement makes clear Fr. Perrone remains restricted from public ministry and from presenting himself as a priest.

"It's vindictive prosecution, vindictive persecution," Kolomjec said, making clear the archdiocese never contacted him before releasing its public statement. He believes the archdiocese is angry that Perrone has fought back as tenaciously — and as successfully — as he has.

"This is going to blow up in their face." he said. "They've got a black eye. They've got to have something to control their priests with. They're worried that every priest will fight back now."

He added, "They're trying to run out the clock. It's an outrage."

It's the latest in the nearly two-year-long legal battle between the Detroit archdiocese and traditionalist priest Fr. Eduard Perrone, suspended in July 2019 over 40-year-old allegations brought by a former altar boy, who has since denied many of the claims, including the one for which the priest was removed: sodomy.

That allegation was brought to the diocesan review board in July 2019 by Msgr. Bugarin, delegate for clergy misconduct, after Macomb County Detective Nancy LePage wrote up a report claiming the accuser, during an interview, admitted to being sodomized by Perrone.

A text message from the accuser, however, disproves this charge. In a text message sent to an archdiocese investigator, the accuser wrote, "I never said anything about sodomy on the camping." He sent the note after learning about the rape allegation from a Church Militant report.

A transcript of the interview also proves the accuser never made such claims, and rather that LePage — with Bugarin present and approving — inserted the word herself into the conversation.

Father Perrone sued her for defamation, and was ultimately vindicated when a three-attorney panel unanimously awarded him $125,000 in July 2020.

He is also suing Msgr. Bugarin for defamation. A separate lawsuit has been filed against Abp. Vigneron, brought by parishioners of Fr. Perrone's parish, Assumption Grotto, alleging fraud and intentional infliction of emotional distress.

In spite of Perrone's vindication and the fact that Bugarin removed the fabricated sodomy allegation from his record, Abp. Vigneron has refused to reinstate him.

Perrone has passed two polygraph tests. Additionally, nearly 100 current and former altar boys have signed affidavits swearing to the priest's moral integrity and declaring they never witnessed any inappropriate conduct on his part.

Fr. Eduard Perrone: 'It may be the greater good which will come forth from all of this.'

As to the upcoming canonical proceedings the archdiocese plans on bringing against Fr. Perrone, his attorney makes clear they won't back down from the fight.

"We're not afraid of a trial. If they're going to give Fr. Perrone a trial for being too zealous in his defense, we welcome it," he said, "because then we can expose what was done to him and how the case was handled from the beginning."

"And had Fr. Perrone not defended himself vigorously, then all the lies and misrepresentations would've been permitted to go forward and Fr. Perrone would've suffered a much worse state," he added. 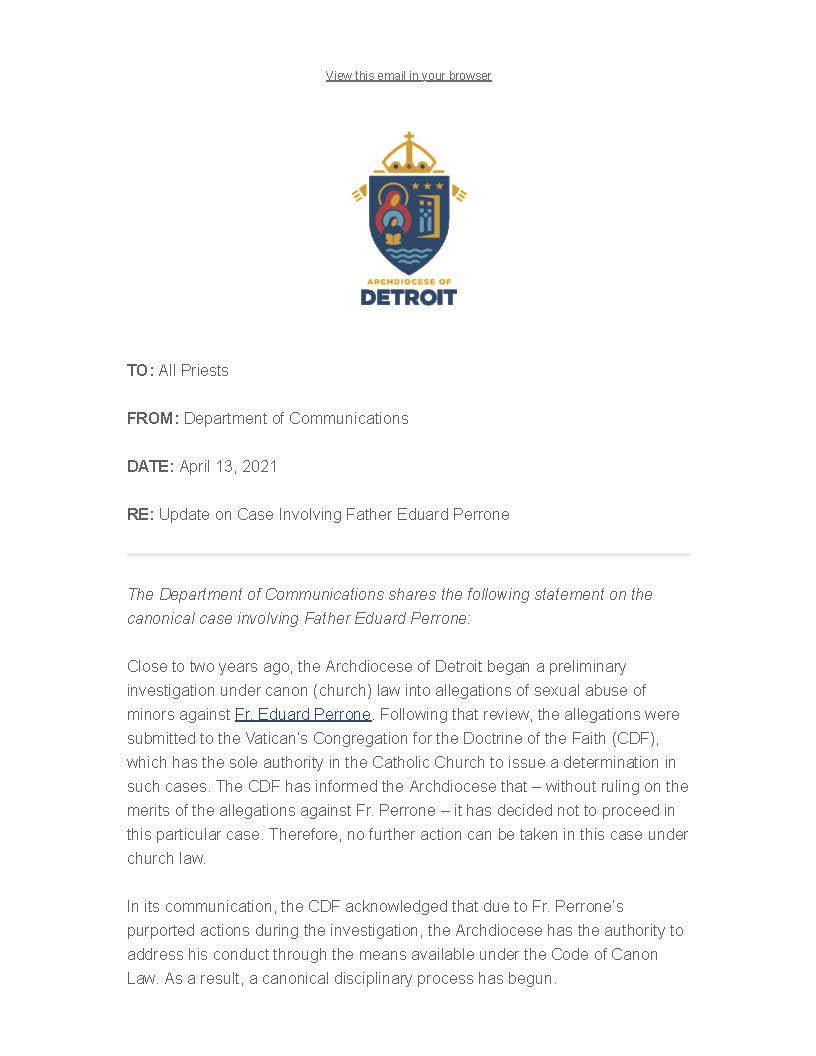 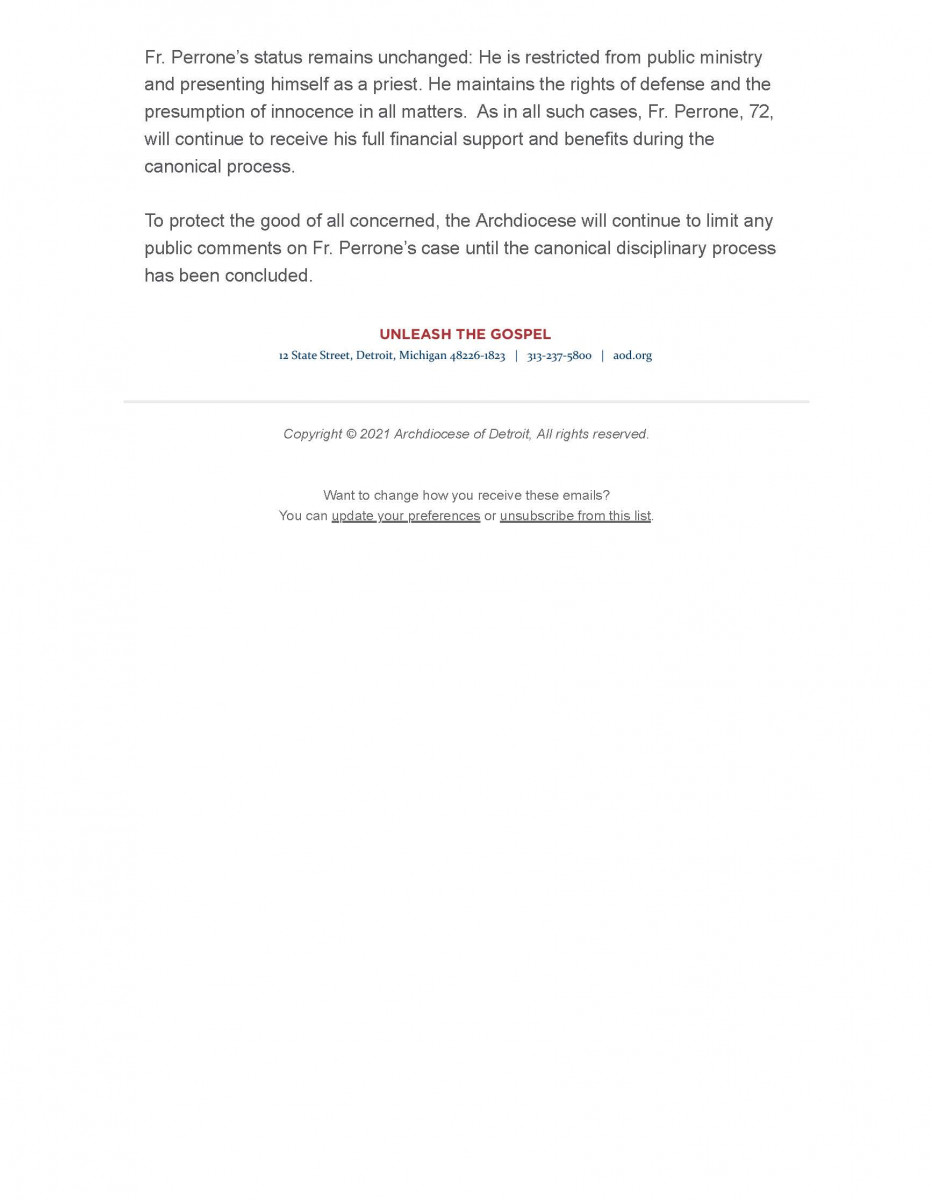