Detroit Pastors Ticked Off at Archbishop 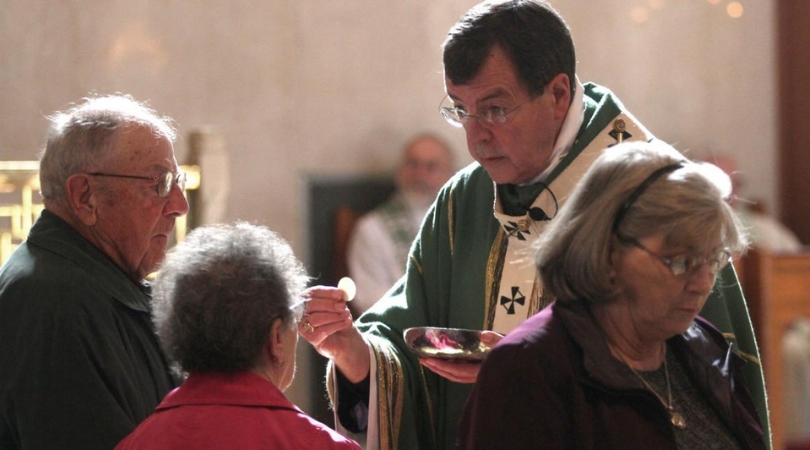 Rebellion brewing in the ranks

A number of priests of the Detroit archdiocese are balking at the archbishop's mandate to raise $220 million from parishioners — only to give half of it back to the chancery.

Church Militant has confirmed that all the priests of the archdiocese met with Abp. Allen Vigneron Monday to discuss "missionary strategic plans," code for raising $220 million from parishes.

A number of priests confronted Vigneron about the impending capital campaign, wanting to know why they would be required to raise millions of dollars from their own parishioners when the archdiocese would take half for unspecified purposes.

The fundraising goal for each parish is 130% of the annual offertory, which many pastors criticized as unreasonable and which they characterized as a money grab.

The fundraising goal for each parish is 130% of the annual offertory, which many pastors criticized as unreasonable and which they characterized as a money grab.

One pastor stood up and accused the archdiocese of being irresponsible to ask for money when there is so much suffering in the Church, saying that healing needs to happen first before demanding that the faithful hand over their money.

Another pastor criticized fundraising efforts for Sacred Heart Major Seminary, which has only had three ordinations in the past year, calling the move irresponsible and saying the seminary should be shut down.

The strategic plans are part of Vigneron's long-term fund-raising effort in Detroit titled "Unleash the Gospel." In 2017 he released a pastoral letter of the same name, which discussed the future of the archdiocese of Detroit, and how parishioners and pastors can become "a band of joyful missionary disciples" — a catchphrase often used in this evangelization initiative.

A "Frequently Asked Questions" document distributed to priests at the Monday meeting explained that "Unleash the Gospel" calls for "the complete renewal of structure, the adoption of new modes and methods and the organization of everything we do for the mission." The implementation of the plan "will result in a new DNA for our parishes."

Nine parishes will participate in the pilot program, to be followed by four "waves" of implementation, culminating in 55–60 parishes converted by 2022.

In answer to the question why the missionary strategic plan is being implemented "in the midst of the abuse crisis," the document explained: "It is because of the presence of sin in the world that we need to share the love and mercy of Jesus Christ more than ever."

That the Detroit priests who attended Monday's meeting were kept in the dark about how the chancery would use the $220 million is consistent with what critics have claimed is a predictable lack of transparency from the archdiocese.

Catholic journalist Jay McNally, who spent years as editor of the archdiocesan paper but was ousted after he exposed the archdiocese's cover-up of predator priest Fr. Gerald Shirilla, has written that "transparency and accountability" are "absolutely contrary to  who [Vigneron] is and much of what he has done as a bishop and vice rector of Sacred Heart Seminary (1988–1991)."

Vigneron has to date been silent on the dissenting LGBT group Dignity/Detroit, which since May 11, 1974 has operated without interruption in his archdiocese — the longest-running Dignity Mass in the country.  According to a seminary professor, Vigneron has failed to put an end to the dissident Masses because he fears a "rebellion" by gay priests in the archdiocese.

Among the more notorious Dignity priests actively ministering in the archdiocese is Fr. Randy Phillips, pastor of St. Blase parish in Sterling Heights. Visitors are greeted with a large rainbow pride flag hanging in the vestibule, which Phillips admits has been there "for years."

When asked in person by Church Militant staff whether Phillips believes homosexual acts are morally illicit, Phillips refused to answer, leaving the room.

Under Vigneron's watch, in 2012 Fr. Peter Petroske, then-pastor of Sacred Heart Parish in Dearborn, was arrested for a DUI while driving naked. This followed years of unapologetic homosexual behavior, alcoholism and angry outbursts as a parish priest. Only after Petroski's arrest did Vigneron restrict the troubled priest.

Vigneron also allowed Sr. Mary Finn to remain on staff at Sacred Heart Major Seminary, even though he was aware that she had admitted to being a lesbian predator, according to Deadline Detroit.

He also keeps on staff several individuals, including former moderator of the curia Msgr. John Zenz and archdiocesan spokesman Ned McGrath, who actively covered up the crimes of Fr. Gerald Shirilla, removed from ministry in 1993 after multiple allegations of abuse against boys and men.

According to McNally, editor at The Michigan Catholic at the time:

The AOD's director of communications, Ned McGrath, came to my office to explain Shirilla's removal and gave me a short official statement that made no mention of what was known in the chancery at the time: Shirilla was a serial sex abuser. He was known at the seminary for more than two decades as an aggressive groomer of good-looking, vulnerable seminarians, some of whom he assaulted and one who committed suicide in 1971. Nor did McGrath mention that Shirilla had previously been dismissed from the SHS for sexual involvement with seminarians in 1980.

Ned was steadfast, refusing to be honest: "That's all I can tell you, Jay." I asked Ned the nature of the allegation against Shirilla: "Is it pedophilia?"

Incredibly, Shirilla was secretly placed back in active ministry — in 2001, in the neighboring Gaylord diocese, with the cooperation of Detroit's Cdl. Adam Maida and Gaylord's Bp. Patrick Cooney. When the news was made public and backlash ensued from angry parishioners, Maida — with the help of McGrath — denied all knowledge.

Vigneron praised the measures passed last week by the U.S. bishops to fight against sexual predation of clergy and promised to begin to implement them in Detroit immediately, saying, "As metropolitan archbishop of the Province of Michigan — the seven Catholic dioceses in the state — I am committed to implementing a process rooted in transparency and accountability for all."

How transparent Vigneron will be with Catholics and how expeditiously he implements mechanisms to punish priests for and prevent them from sexual predatory behavior remains to be seen.

In the meantime, a rebellion is brewing in the ranks of Detroit parish priests.

Tuesday's meeting was video recorded, but given how poorly it went and the backlash shown by priests, it's unlikely it will be publicly posted; if it is, it will likely be heavily edited.