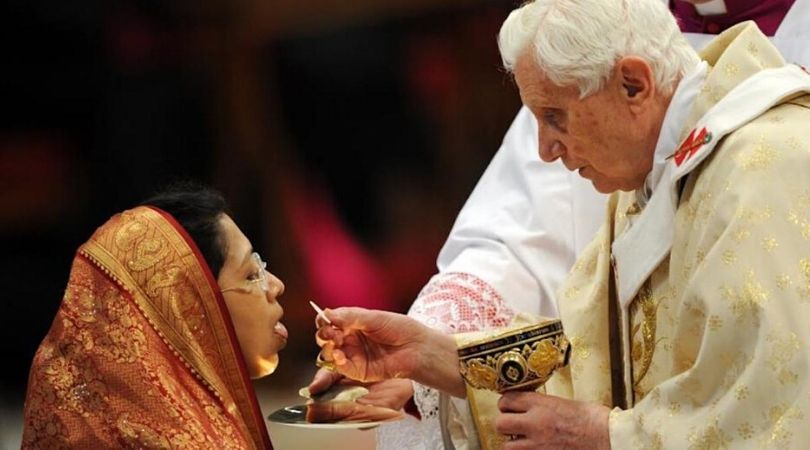 An appeal to Austria's bishops

VIENNA (ChurchMilitant.com) - Some doctors say Communion on the tongue is actually safer than in the hands.

Twenty-one Catholic physicians in Austria issued a letter to the Austrian bishops' conference supporting the reception of Holy Communion on the tongue — a practice now under fire due to concerns about the spread of COVID-19.

"From the point of view of hygiene, it is absolutely incomprehensible to us why oral Communion has been banned in Austria," the letter reads, as translated by LifeSite. "We also consider this form of distribution safer than hand Communion."

This comes in response to a decree from the Austrian bishops essentially barring Communion on the tongue.

"The decree of the Austrian bishops' conference brings many priests and faithful into a serious conflict of conscience," the letter argues. "According to the valid norms of the Church, the giving of Communion in the hand is still based on an indult, while Communion on the tongue is still the regular form of receiving Communion."

The doctors' letter points to a number of practices from the Traditional Latin Mass that are more sanitary than what is done in many parishes today.

According to the valid norms of the Church, the giving of Communion in the hand is still based on an indult, while Communion on the tongue is still the regular form of receiving communion.

"It is part of the traditional rite," the doctors state, "that the priest should wash his hands in the sacristy immediately before the beginning of Holy Mass. Only he touches the chalice and ciborium."

"After the consecration," the letter notes, "he keeps his thumb and index finger — which he has ritually washed with water again just before — closed until after Communion, so he does not touch anything with them except the consecrated Host."

Beyond Austria, bishops in many countries have tried to ban Communion on the tongue under the banner of combatting the spread of the Wuhan virus.

Mexico's bishops' conference took similar action against Communion on the tongue, saying in a document, "It is considered very convenient, for the same circumstance, that Holy Communion, during the eventual emergency, should be distributed in the hand and not in the mouth, according to the regulations of the Church."

In the United States, a number of dioceses and bishops have clamped down on the traditional method of receiving Holy Communion.

Bishop Michael Olson of Fort Worth, Texas declared back in April that Communion must only be given on the hands in his diocese.

As reported in early May, a source told Church Militant the bishops of Michigan are asking Rome for permission to ban Communion on the tongue.

People will always be able to receive on the tongue.

In the archdiocese of Chicago, the vicar general in an e-mail in March told priests, "Given the frequency of direct contact with saliva in the distribution of Holy Communion on the tongue, every consideration should be given by each individual to receive Holy Communion reverently in open hands for the time being."

These measures contradict a 2009 document from the Vatican, which says laity in the Roman rite are always allowed to receive Communion on the tongue — even during times of pandemic.

Despite what individual bishops may have decreed, the United States Conference of Catholic Bishops (USCCB) affirmed in an April 30 memo that laity can take Holy Communion on their tongues "without unreasonable risk."

The USCCB memo alludes to there being conflicting opinions in the medical community about how to receive Holy Communion safely.

Amid all this, some prelates have defended the laity's right to receive Communion on the tongue in the traditional manner.

For instance, Bp. Joseph Strickland of Tyler, Texas told Church Militant, "Communion on the hand or on the tongue are options for the faithful that cannot be restricted."

Likewise, the archdiocese of Portland under Abp. Alexander Sample has maintained laity are allowed to receive on the tongue. In March, the archdiocese issued a statement upholding laity's right to receive the Eucharist on the tongue. The statement claimed the archbishop and the liturgy office had consulted with two physicians, noting, "They agreed that, done properly, the reception of Holy Communion on the tongue or in the hand pose a more or less equal risk."

Then, in May, spokesperson for the Portland archdiocese commented, "People will always be able to receive on the tongue."

Faithful Catholics believe in the Real Presence of Christ in the Eucharist. Many traditional-minded faithful believe reception on the tongue is more reverent.