Bishop Fang said that Catholics should support President Xi's proposed sinicization of religion "because we, as citizens of the country, should first be a citizen and then have religion and beliefs." (Chinese government-appointed bishops back Vatican-China deal)

Then went the officer with the ministers and brought them. … And when they had brought them, they set them before the council. And the high priest asked them, saying: Commanding, we commanded you that you should not teach in this name, and behold, you have filled Jerusalem with your doctrine: and you have a mind to bring the blood of this man upon us. But Peter and the apostles answering said; We ought to obey God rather than men. (Acts 5:26–29)

With each passing day, the Roman Catholic Church enters more deeply into a crisis of faith. It is occasioned by deepening concern that, under the leadership of Pope Francis, the Vatican means to discard fundamental tenets of the "faith once delivered to the saints," (Jude 1:3) and, by the grace of God's Holy Spirit, preserved in the teaching of the Church. As I wrote last week, one grave symptom of that danger is the reported fact that Pope Francis has accepted a deal with the Chinese government which abdicates the authority of the Holy See in matters of doctrine. His abdication of authority appears to include surrendering the Church's teaching that about the primacy of God's authority over matters of conscience, including those which pertain to the pursuit of justice in human affairs.

The statement quoted above, from the Chinese government-appointed bishop, Peter Fang Jianping, goes to prove that the prospective deal between the Vatican and the Communist Chinese government will abandon faithful Catholics in China. In surrendering to Caesar the things that are of God, it also abandons Christ's command to render such things to God. Bishop Fang's words openly reject St. Peter's view that Christ's followers owe obedience to God's rule in preference to any human authority whatsoever.

Saint Peter himself died to keep faith with Christ's example of that obedience. If one who sits in the chair of Peter is willing to hand God's authority over to godless government, what becomes of the truth that the authority of the bishop of Rome, and all other bishops — properly derives from God in Christ? Must the universal Church now submit to God-denying authorities throughout the world? Did all the martyrs throughout the centuries who refused to do so, give their lives in vain?

Thinking perhaps to justify the illogical deal, Bp. Marcelo Sanchez Sorondo, Pope Francis's chosen head of the Pontifical Academies for Science and Social Sciences has reiterated his view that the Chinese government is "best at implementing the social doctrine of the Church." Apparently, Bp. Sorondo thinks that subjugation has replaced subsidiarity when it comes to understanding the God-decreed social role of human governments. Otherwise, how can one justify the pretense that the Holy Spirit has chosen China's baby-killing Communist Party tyrants to oversee the spiritual life of that nation's Catholic Christians?

King Henry VIII of England was infamous for sentencing but two of his wives to death. Yet scores of Catholic priests and laity chose martyrdom rather than to acknowledge his authority over the Church in England. Now the specious material peace and order imposed by China's brutally totalitarian Communists supposedly permits the Vicar of Christ to forswear the primacy of God's authority, to which such martyrs were faithful (in China as well as England) even unto death?

I can already hear objections from those who pretend that there is a sphere of secular authority where God's writ does not run. To prove their point, they rely on the so-called "separation of Church and state" doctrine that secular jurists promote as an imperative of constitutional law in the United States and elsewhere. But for individuals striving to remain in a state of grace, there can be no question of adherence to this doctrine. God's rule prevails over the whole person. On that account, revered Christian martyrs have solemnly accepted to die rather than bow to purportedly "lawful" edicts that contradict God's provisions for human deportment, in respect of Himself, humanity and the whole of His creation.

So, the Apostle admonishes us, down through the ages: "Do not be conformed to this world but be transformed by the renewal of your mind, that you may prove what is the will of God, what is good and acceptable and perfect" (Romans 12:2).

How can one justify the pretense that the Holy Spirit has chosen China's baby-killing Communist Party tyrants to oversee the spiritual life of that nation's Catholics?

So Pope Pope Paul VI forewarned us in the encyclical Humane Vitae of the danger of ceding moral and spiritual authority to godless, or anti-Christ governments like that of China.

"Finally," he wrote, "careful consideration should be given to the danger of this power passing into the hands of those public authorities who care little for the precepts of moral law." Such are the authorities of the Communist Chinese government. They have repeatedly asserted their will to impose the use of evil means to achieve what Bp. Sorondo wrongly identifies as the "common good."

But if the Church gives moral and spiritual authority to evil, what good may come of doing what God forbids? Who are called to bear witness against such false concessions to human power, if not the people of God, called by the name of Christ His Son; and the bishops and martyrs foreknown by God and impelled by His Holy Spirit "to be conformed to the image of His Son."

Has this not been the predestined calling of the Church's true apostolate since Christ ascended? It is a calling to be upheld in good faith, unto death and the crown of glory, as Christ himself instructs (Revelation 2:10) until He comes again. 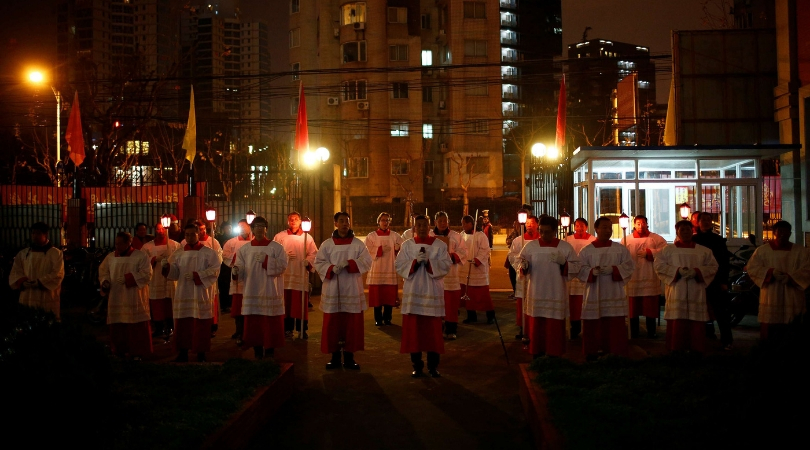 Pleas From the Underground Church
By Church Militant   •   0