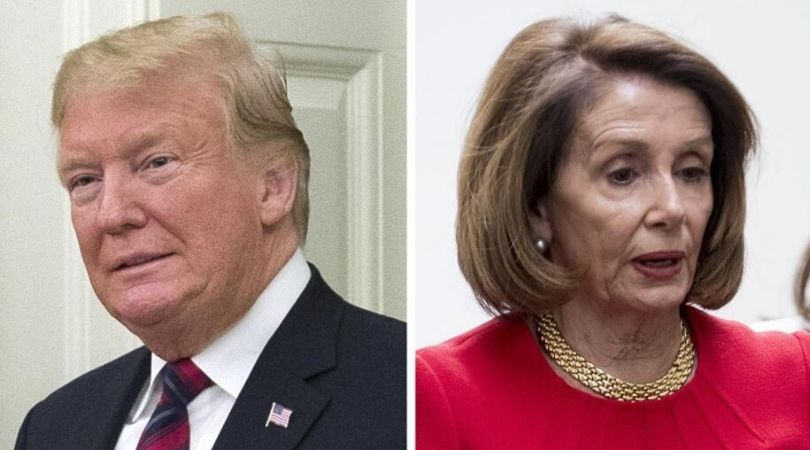 WASHINGTON (ChurchMilitant.com) - President Donald Trump is slamming Speaker of the House Nancy Pelosi in a fiery letter in which he expressed his "strongest and most powerful protest" to the "partisan impeachment crusade" she is leading.

In the the six-page, singled-spaced missive, Trump covered the many issues surrounding the impeachment in a strongly worded condemnation of Pelosi's "leadership."

"Your spiteful actions display unfettered contempt for America's founding and your egregious actions threaten to destroy that which our founders pledged their very life to build," he wrote.

Good marks and reviews on the letter I sent to Pelosi today. She is the worst! No wonder with people like her and Cryin' Chuck Schumer, D.C. has been such a mess for so long - and that includes the previous administration who (and now we know for sure) SPIED on my campaign.

The president condemned Pelosi for trying to impeach him by falsely accusing him of what Joe Biden admitted to doing: "You know full well that Vice President Biden used his office and $1 billion dollars of U.S. aid money to coerce Ukraine into firing the prosecutor who was digging into the company paying his son millions of dollars. You know this because Biden bragged about it on video."

Toward the the second claim, obstruction of Congress, the president said it is "preposterous and dangerous. House Democrats are trying to impeach the duly elected President of the United States for asserting Constitutionally based privileges."

President Trump lambasted Democrat Rep. Maxine Waters, who within less than three months of his inauguration said, "I'm going to fight everyday until he is impeached." He called James Comey one of the "dirtiest cops our Nation has ever seen."
He also called out Congresswoman Rashida Tlaib, who shouted "just hours after she was sworn into office: 'We're gonna go in there and we're gonna impeach the motherf****r.'"
And the president cited representative Al Green, who laid bare his impeachment motivations: "I'm concerned that if we don't impeach this president, he will get re-elected."

Can you believe that I will be impeached today by the Radical Left, Do Nothing Democrats, AND I DID NOTHING WRONG! A terrible Thing. Read the Transcripts. This should never happen to another President again. Say a PRAYER!

Moran said Trump is "a fighter. He doesn't give up. He doesn't take the easy way out, and he's not afraid to defend himself," adding that, unlike other politicians, he "doesn't care what the Washington insiders think."
Bannon described the letter as a "blowtorch," citing others who called it "poetic" and "brilliant."

Pelosi reacted to the letter by condeming it before she had read it.

"I don't have a reaction. It's ridiculous," she said. "I mean, I haven't read it. We've been working. I've seen the essence of it. It's really sick."

The president ended the letter with a plea "to immediately cease this impeachment fantasy" and "get back to work for the American People." He granted that he did not expect Pelosi to do so, but said, "I write this letter to you for the purpose of history and to put my thoughts on a permanent and indelible record."

"One hundred years from now, when people look back at this affair," he noted, "I want them to understand it, and learn from it, so that it can never happen to another President again."