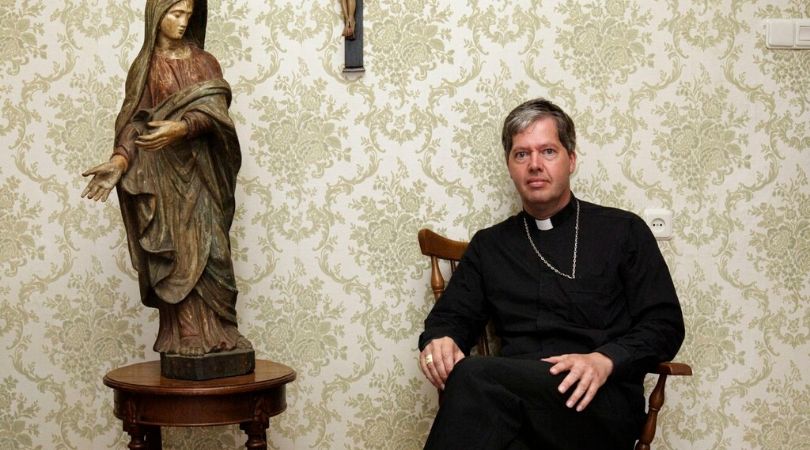 VATICAN (ChurchMilitant.com) - A Dutch bishop is condemning the Amazon Synod for attempting to turn the Catholic faith into a "new religion" by "embracing pantheism" and recognizing "pagan superstition as a source of revelation."

Bishop Robertus Mutsaerts of Hertogenbosch in the Netherlands has described the Working Document of the "so-called Amazon Synod" as promoting "eco-socialism, climate change, ecumenism, viri probati and the ordination of women."

There is a "single mention of Jesus," in the synod's working document, he wrote in a Thursday post on his blog, "but not as Son of God and Savior," but as "Jesus the philosopher, revolutionary and hippie."

There is not a word about the work of Jesus' redemption or about repentance.

The auxiliary bishop of the southern Dutch city, colloquially known as Den Bosch, made news when he turned down the invitation to attend the October Youth Synod in 2018 because of Abp. Carlo Maria Viganò' allegations about corruption in the Church hierarchy.

By denying divine revelation and recognizing pagan superstition as a source of revelation, the bishop claims the synod is betraying "Christ’s unique work of salvation" and saying that there are "alternative ways that lead to salvation."

This makes Jesus "just one of the many" and "removes the Church from its identity as it has always understood it," the bishop elucidates.

Amazon Synod's Stations of the Cross began with sage-burning ritual and featured the controversial female fertility figure, dubbed "Pachamama," along with banners of marxist activists.
Clergy and religious took part.

In fact, there is "not a word about the work of Jesus' redemption or about repentance." Holiness is misinterpreted and "embracing trees is considered [a] higher [form of spirituality]," Mutsaerts writes.

The bishop, whose intervention prevented Dutch media from blowing up the case of a lesbian couple seeking baptism for their child, admonished Pope Francis for his inaction and lack of transparency on sex abuse cases.

Bishop Mutsaerts also criticized the pontiff for being selective and even exclusive in deciding his dialogue partners: "The Pope recently noted that he wanted to start a debate with everyone. Except if your name is Burke or Müller. Burke and Brandmüller (the so-called 'dubia' cardinals) are still waiting for answers to some simple questions."

Challenging the media's biased reporting, Mutsaerts asks why the mainstream press is unable to tolerate any criticism of Pope Francis, when the same media were routinely critical of Pope John Paul II and Pope Benedict VI.

Why is anyone who criticizes Pope Francis immediately branded as plotting to do away with him? he asks.

Mutsaerts also laments the Pope's words on the return flight from Africa when the pontiff claimed he does not fear a schism.

"I do fear a schism," says Mutsaerts. "That is really the worst thing that can happen to the Church."

Finally, the bishop debunks the blanket of compassion used to cover sin. "How often do I hear that it is all a matter of mercy? I don't believe them. It is false mercy."

Mutsaerts explains how progressives in the Church want to liberalize celibacy not to sanctify the priesthood, but to set aside a rule that requires holiness. According to him, they want to approve of homosexuality because they want to say that sin is no longer sin. They also want to allow sex outside of marriage because they do not want to recognize marriage among one man and one woman as the only God-recognized marriage covenant.

"Be honest and stop hidden agendas," he concludes.

Be honest and stop hidden agendas.

Bishop Mutsaerts faced schism in his own diocese when a parish dominated by progressives rebelled against traditional Catholic teaching and split from the diocese, holding services in a community center near the church.

The diocesan spokesperson's answer to the schism was a non-committal "All are free to profess their faith."