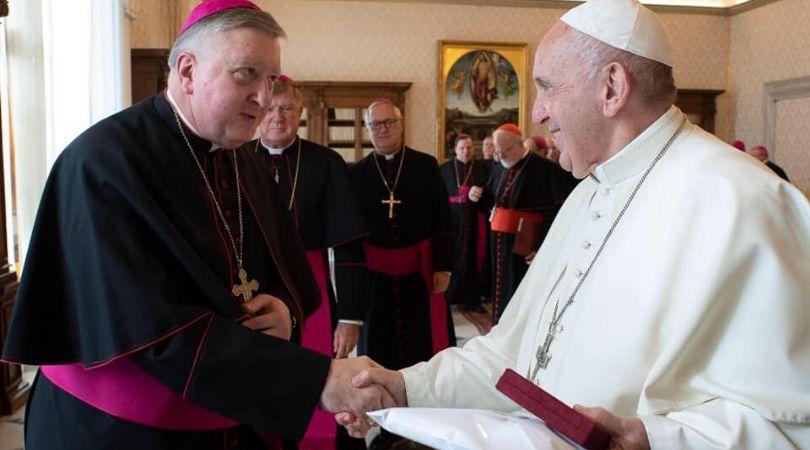 ST LOUIS (ChurchMilitant.com) - After recently refusing Communion on the tongue to his flock owing to the Wuhan virus scare, an East Coast episcopal champion of "interreligious dialogue" is on his way to America's heartland to serve as an archbishop.

"Mindful of God's goodness, I wish to express my gratitude to our Holy Father for his trust that he has placed in me," said Rozanski after the announcement.

"It is my hope that, called to lead this Church of St. Louis, God's grace will be in abundance in helping me to be part of that healing process and resolution to all of the daunting issues that we face," he added. "No leader, though, can do this alone. We must work together if we truly want to realize the mandate of Jesus to bring justice and peace to our families, our communities, our nation and world."

The departing Carlson said in a tweet, "This large and generous community of faithful Catholics will continue to encourage me in my faith journey, and I know that Bp. Rozanski will cherish his new ministry," adding in an attached tweet, "I am confident in the future of God's strong Church in St. Louis with archbishop-elect Rozanski as its shepherd."

Church Militant spoke with a Midwestern priest and former seminary professor on condition of anonymity about Rozanski's appointment.

"The new episcopal appointment of Rozanski to St. Louis should come as no surprise to anyone," he said. "Rozanski is a prelate who toes the line by the real 'powers' behind the scene and not God the Holy Spirit."

"As the new American kingmaker," father continued, "Cupich follows the examples of his immediate predecessors, [Theodore] McCarrick and [Joseph] Bernardin. In this instance, it's hard to tell whether Rozanski is gay himself, but he is certainly gay friendly and all too willing to keep pushing Bernardins' far-left, commie, gay-friendly agenda to destroy the Church."

Rozanski is a prelate who toes the line by the real 'powers' behind the scene and not God the Holy Spirit.

In 2016, Rozanski published "The Wideness of God's Mercy: A Pastoral Letter Reflecting on Evangelization" on the Springfield diocese's website.

Rozanski had asked "each parish, as part of their evangelization efforts, to study and examine the needs of their people and local community to determine how they can provide for them."

One of the topics he touched on was "The gay community feels that they aren't welcome. They don't want to espouse another religion; therefore, they don't attend church at all. Hopefully, a special outreach could be done to them."

But in December 2019, Rozanski forbade the Pioneer Valley Gay Men's Chorus from singing at a parish Christmas concert.

Rozanski served as the chair for the U.S. Conference of Catholic Bishops' (USCCB's) Committee on Ecumenical and Interreligious Affairs (EIA) from 2014–2017.

In 2016, the USCCB participated in a panel discussion with the Islamic Society of North America, a front group of the Muslim Brotherhood. The discussion was sponsored by the National Catholic-Muslim Dialogue, an outreach group of the EIA chaired by Rozanski at the time.

Later in 2016, Rozanski sponsored "Looking at the Face of Mercy Through the Eyes of God" — an interfaith dialogue — through the dioceses' Office of Faith Formation. The dialogue included speakers such as Imam Rasul Seifullah of the Al-Baqi Islamic Center for Human Excellence and Rabbi Devorah Jacobson, director of spiritual life for Jewish Geriatric Services Lifecare.

The episcopacy in the United States is thoroughly one stinking, rotten, mess to the core.

"In our world fraught with division and despair, Jordan Denari Duffner's experiences bring a fresh insight into Muslim-Catholic relations," begins the endorsement. "In addition to recounting her many positive encounters with people of the Muslim faith, Jordan shares her insights in the ways that her own Catholic faith has deepened as a result."

"This book is an oasis of hope and a must-read by all who take seriously the need for dialogue and understanding, particularly between Muslims and Catholics," he concluded.

Expanding on his desire to work together with his new flock, Rozanski said, "I need to be out amongst the people, meeting them."

"My first months here will be a lot of learning. I don't want to make any decisions or have any preconceived notions," he added. "It's a very relational time, because people share their thoughts and their feelings, their insights with me. I am looking forward to that."

But father is unimpressed and only sees more of the same in Rozanski's new appointment.

"No, nothing new with Rozanski's appointment to Saint Louis — 'the Gateway to the West!' The episcopacy in the United States is thoroughly one stinking, rotten, mess to the core," he said.

"King St. Louis [after whom the St. Louis Cathedral is named] is probably beseeching God on High as I write this, 'What has become of the Roman Catholic Church?'"