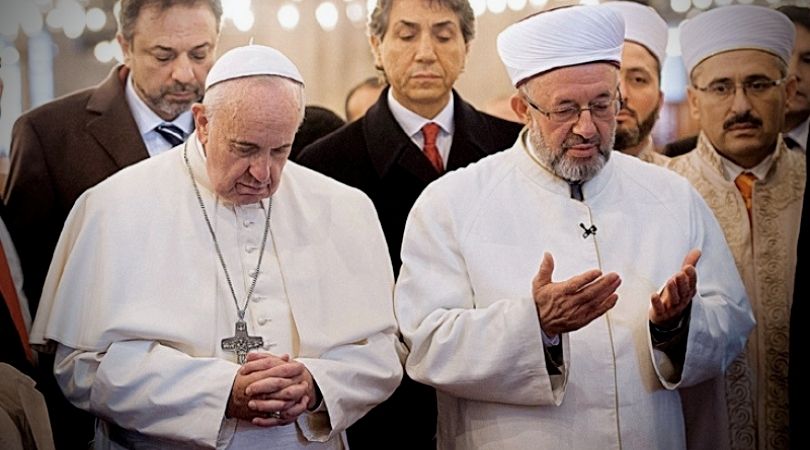 Are we winning or losing?

Two events (among many) have caused perplexity among Catholics to this day: to see His Holiness Pope Francis kissing the lips of the grand imam of Egypt (horresco referens!), and, in what appeared to be a response to the pontiff's gesture, the decision of Turkey's president to "convert" the basilica of St. Sophia into a mosque. Santa Sophia had been a museum for decades.

These facts are loaded with historical symbolism. For centuries, the church had therefore been a Catholic temple. The ancient cathedral of Holy Wisdom (Sophia, in Greek) was erected in the sixth century, long before the revolt of Greek Christians against the authority of the Roman pontiff in 1054.

In 1453, the Turks destroyed the decaying Eastern Roman Empire and conquered its capital, Byzantium, present-day Istanbul. After ordering the massacre of Christians who had taken refuge in the cathedral of St. Sophia, the Turkish sultan had the temple transformed into a mosque, and so remained for almost 500 years, desacralized and used for pagan worship.

In 1934, Turkey's secular republican government made it a museum. Now it has been returned to mosque status, provoking reactions from personalities from around the world.

In recent years, we have witnessed the sad scenes of vandalization of churches in Chile, Argentina and — more recently — in America.

The story of St. Sophia serves as an analogy for the current situation of Christianity. That symbolic church was violently conquered by Islam almost 600 years ago, and today other churches are having the same tragic fate. The difference — the huge, unimaginable difference — is that now this occurs without violent conquests, without wars, and, what is much worse, with the lack of interest and even collusion of those same who should defend it. A few notable examples come to mind:

The Catholic Church of the Holy Trinity was sold in 2014 to an immigrant entity and later transformed into a mosque. Images of it caused consternation; in the beautiful gothic-style interior nave, dozens of Muslims knelt on a huge carpet, facing Mecca. The beautiful stained glass windows with Catholic motifs still remain but have been covered with fabrics. Hundreds of crosses have been replaced by Muslim crescents, including in the outer towers.

Artisans of the present "interconfessional religious miscellany" decided to rename the Church of the Holy Trinity the "Mosque of Jesus, son of Mary." For a frivolous, superficial Catholic, penetrated with interfaith "ecumenical" concepts, this may seem acceptable, even commendable, as it takes into account that Islam recognizes Our Lord Jesus Christ as a mere prophet, but denies "only" his divinity.

In 2017, Fr. Francis Mazur was pleased to learn that the church of St. Gerard would be sold to Muslims: "I am happy because the group that is buying is the Muslim community ... they will be very active in community issues ... They're going to be very good neighbors."

The enormity of this nonsense is even difficult to measure, for Our Lord Jesus Christ has been cast out of His own house, and in his place, the staunch enemy of Christendom will be worshipped. And the "Catholic" priest rejoices in this because Muslims will "bring business."

For years the church of St. Eligius had been losing faithful. In 2013, the diocese decided to sell the building. The first interested parties did not take long to appear — a group of Muslims. They needed a place for their mosque, and the church building proved ideal for them.

The controversy gained space in the newspapers when the nonprofit "Confraternity of Saint Eligius" launched a campaign entitled "Stop the Mosque!" They even collected donations for the acquisition of the building. However, before the purchase took effect, the Vierzon prefecture intervened and acquired the church building to limit its use to "non-confessional" activities.

Father Alain Krauth, in charge of the church, raised his voice against the intervention of the Catholic confraternity. According to him, it would have been better for the church to become a mosque instead of a Catholic chapel because Muslims would have an appropriate place for their worship.

In the face of such attitudes, how can we not be surprised that the number of Catholics is decreasing more and more and that Muslims settle in our churches? Additional churches in Europe have been sold, becoming bars and places of profane parties.

All these facts, worrying as they are, would be of little importance if there were no betrayal of the Catholic authorities themselves. In recent years, we have witnessed the sad scenes of vandalization of churches in Chile, Argentina and — more recently — in America, perpetrated in many cases by Christians themselves. They are the current supporters of the Islamic invasion, the great weapon of Islam against Christian nations.

The street from Christianity to Islam is one way. Woe to him who tries to go the other way.

Historically, Islam has only had its successful expansion when facilitated by the decadence of Christian peoples involved in infighting, heresies, betrayals and revolts. The same can be said of the Christians of the Byzantine Empire. The separation of Rome, with the infamous Eastern schism, was undoubtedly one of the remote causes of the defeat of Byzantium by the Turks and the consequent transformation of St. Sophia's into a mosque.

As "ecumenism" replaces the authentic evangelization ad gentes, it makes sense that the pope's kiss to the grand imam of Egypt symbolically sealed the gradual and stealth diminution of the influence of the Catholic Church in Europe and the raising of Islam.

The street from Christianity to Islam is one way. Woe to him who tries to go the other way. Even the pope will not come to his aid.

When we will open our eyes, while we still have them, on the need for some moral equivalency? Today, Christians are killed if they do not convert to Islam, and Muslims who convert to Christianity are massacred. Meanwhile, in Europe, mosques proliferate and churches in the Islamic world are burned to the ground.

May the war cry of the prophet Elias resound in our souls as we deplore the lukewarmness of Catholics in the face of such an enemy and fill our souls with his zeal: Zelo zelatus sum, pro Domino Deo exercituum!" (With zeal I have been zealous for the Lord, God of Hosts)!