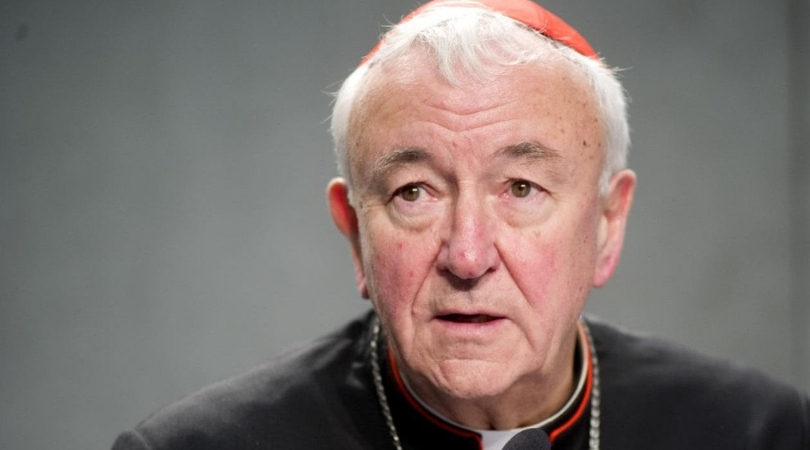 LONDON (ChurchMilitant.com) - A Catholic flagship LGBT+ group backed by Britain's most influential cardinal has celebrated its 20th anniversary with a prayer walk beginning at the Oscar Wilde memorial in London.

The LGBT Westminster Catholics Association — which openly challenges Catholic teaching on homosexuality and is officially endorsed by the archbishop of Westminster, Cdl. Vincent Nichols — marked two decades of the so-called "Soho Gay Masses" on Holy Saturday.

On Ash Wednesday, Pope Francis welcomed 16 pilgrims from the group, led by ex-priest Martin Pendergast, a leader of the group, and pilgrimage chaplain Fr. David Stewart, S.J., for an audience at the morning papal audience in St. Peter's Square.

Pendergast has been in a homosexual civil partnership with Julian Filochowski, the former head of Catholic International Development Charity (CAFOD), since 2006. CAFOD is the official aid agency of the Catholic Bishops' Conference of England and Wales.

Notorious for the so-called Soho Gay Masses, the group also proudly identifies with openly homosexual Catholic priest Bernárd J. Lynch, who says on his blog, "I am married to my husband Billy since 1998."

The Soho Masses began in the Westminster diocese in April 1999, on the Sunday following the bombing of the Admiral Duncan public house in Old Compton Street, as a pastoral outreach to be "particularly welcoming to lesbian, gay, bisexual and transgendered Catholics, their parents, friends and families."

The fortnightly services were first held in the Convent of the Helpers of the Holy Souls in Camden Town, London.

Since March 2007, following consultation with diocesan representatives, Masses were celebrated at the Church of Our Lady of the Assumption and St. Gregory, Warwick Street, Soho.

However, in 2013, Cdl. Nichols announced that the Masses in Soho were to end, but pastoral care of the community would continue at the Jesuit Church of the Immaculate Conception on Farm Street church in Mayfair on Sunday evenings.

The group proudly identifies with openly homosexual Catholic priest Bernárd J. Lynch, who says on his blog, 'I am married to my husband Billy since 1998.'

In a pastoral letter to the LGBT Westminster Catholics group, Nichols referred to his 2012 column stating "that many types of sexual activity, including same-sex sexual activity, are not consistent with the teaching of the Church."

Nevertheless, the group emphatically stated it would continue to be participating in eucharistic services at the new venue as part of its pastoral care: "The Masses at Farm Street will, clearly, continue to be at the heart of our life in communion, and of our pastoral activity, and we look forward to participating fully in them."

It called upon "priests with connections to Farm Street who have ministered to us at Warwick Street in the past" to make "us feel especially welcome."

While the group claims to have a regular evening congregation of well over 100 worshippers and says its outreach extends to over 250–300 people, its focus has been on LGBT activism in the Catholic Church.

Organizers boast they "have become victims of our own success, in terms of the number of people who have joined the eucharistic community of our congregation."

Terence Weldon, a key activist behind the Soho Masses Pastoral Council, runs the Queering the Church blog. Saying he is "deeply committed to the value of family," Weldon has produced YouTube videos on "How to be Happy, Catholic and Gay."

Weldon was once married to a woman and has two daughters from his marriage. He now lives with his partner, Raymond, and also participates actively in his local parish, "where I make no attempt to hide or downplay either my sexuality, or my involvement with LGBT Catholic activism (and have had an extremely supportive response from fellow parishioners and the two local priests)," he writes.

After Cdl. Nichols presided at the Westminster LGBT Mass and distributed Holy Communion on May 10, 2015, Weldon wrote: "Nichols will have known that many of those are in loving (possibly sexual) relationships, civil partnerships, or legal marriages. A long line formed before him for communion, and all received the sacrament — exactly as it should be."

A founder member of the Soho Masses, he says he was one of the team that met with then-Bishop Bernard Longley to discuss the issue of moving to Warwick Street.

Soon after, Archbishop Longley of Birmingham accused conservative Catholics of being "judgmental" in their opposition to the officially approved Soho Masses in the archdiocese of Westminster and acting out of prejudice.

A cleric told Church Militant that even though numbers attending Mass were relatively small, he was concerned about the impact of the group on younger people struggling with issues of sexuality.

A cleric told Church Militant that even though numbers attending Mass were relatively small, he was concerned about the impact of the group on younger people struggling with issues of sexuality through the LGBT Catholics Younger Adults Group (YAG).

YAG is an offshoot of the Soho Masses Pastoral Council and has organized LGBT "Pride Masses" at the Farm Street Jesuit Church.

The Soho Masses are served by a rota of 15 priests from various dioceses and religious communities, some of whom are resident or work in the Westminster diocese.