Church Militant has learned from sources at the Vatican that the situation here in the United States, activated by the damning Pennsylvania grand jury report, has forced Pope Francis to order an investigation into U.S. bishops' and cardinals' conduct as it relates to handling sexual abuse cases and subsequent reassignments of predator priests.

We are told that the Congregation for the Doctrine of the Faith — the CDF — has begun its investigation into the matter and that Abp. Charles Scicluna will be leading the investigation, just as was done in Chile.

These same sources tell Church Militant that the Vatican is deeply concerned with the real possibility of a U.S. federal grand jury investigation under U.S. Attorney General Jeff Sessions looking into possible RICO violations that would ultimately tie back to the Vatican itself.

According to our sources, Pope Francis is shaken by the Pennsylvania grand jury report. He has asked Abp. Charles Scicluna of Malta to collect evidence regarding allegations of sexual abuse of minors and seminarians and cover-up by cardinals and bishops of the United States Conference of Catholic Bishops of such crimes. Sources inform Church Militant that he is expected to arrive soon on U.S. shores.

Scicluna, who, prior to his current appointment as chief judge of the Vatican's college for review of appeals by clergy accused of graviora delicta and archbishop of Malta, served for years as the global Catholic Church's chief prosecutor. In layman's terms, he is the expert of the foulest crimes that can be committed by clergy. When he arrives in the United States to start investigating, it will likely not be a pretty scene.

His investigation in Chile — covering similar charges as those here in the United States — resulted in the entire conference of Chilean bishops formally tendering their resignations for their direct or indirect participation in and/or cover-up of sexual abuse by clerics — mostly homosexual in nature — including secret settlement payouts and moving priests around to shelter them from scrutiny.

When the archbishop arrives with a mandate from the Pope to get to the bottom of the scandal, he will have a much more daunting task on his hands than he did in Chile.

There is much to uncover, with many U.S. prelates and their staffs having clear motive to keep their malfeasance covered up.

From the McCarrick scandal and getting to the bottom of how many prelates knew about his decades of evil and did nothing, to the fallout from the Pennsylvania grand jury report, released this past Tuesday by Josh Shapiro embracing specifically Cdl. Donald Wuerl, who covered for predator priests — moving some of them around and paying at least one of them hush money for keeping quiet about other priests engaged in criminal sexual activities — to the flood of fresh reports pouring in by the hundreds from seminarians and priests who were either abused or reported the abuse and whose reports were dismissed and then punished for blowing the whistle, including St. John's Seminary for Cdl. Sean O'Malley of Boston, who, late last week, was forced to cancel his plans to travel to Dublin, Ireland for the decidedly pro-gay World Meeting of Families.

Sources are saying that even discussions of a RICO investigation — which are now popping up in the secular media — have high-ranking Vatican officials very worried.

Donald Wuerl, likewise, suddenly — and with no explanation — also withdrew from the event, even though he was scheduled to give the keynote address.

That not just one, but two very influential cardinals of the Church in America suddenly reversing course this late in the process and canceling plans to participate — proof of just how out of control the entire situation has become for the U.S. hierarchy.

Privately, sources are saying that even discussions of a RICO investigation — which are now popping up in the secular media — have high-ranking Vatican officials very worried. The first hint of such a possibility was actually spoken out loud by Pennsylvania Attorney General Josh Shapiro at this past Tuesday's press conference:

The abuse scarred every diocese, the cover-up was sophisticated and all the while, Church leadership kept records of the abuse and the cover-up. These documents, from the dioceses' own secret archives, formed the backbone of this investigation, corroborating accounts of victims and illustrating the organized cover-up by senior Church officials that stretched, in some cases, all the way to the Vatican.

Shapiro was more explicit in a follow-up interview on NPR the next day.

Audie Cornish: "How many other states have contacted you saying that they intend to or are thinking about convening grand juries similar to this one?"

Josh Shapiro: "I've had many private conversations over the last 48 hours with other state attorneys general and prosecutors in other states who have expressed interest in doing the kind of work we did in Pennsylvania."

While Shapiro did not directly hint at RICO violations per se, other states' attorneys general have begun laying the preliminary groundwork for their own grand jury investigations, as Church Militant was first to report Friday, most especially the state of New York, as well as Nebraska, while other indications are that states like Maryland are now raising the same questions.

If a sufficient number of states begin convening grand juries, it is nearly a guarantee that the U.S. Justice Department would also begin looking at its own grand jury to examine the question of RICO violations.

RICO is the 1970 federal law designed to bust up organized crime syndicates and their interstate activities, and it is that prospect, more than anything else, that is causing many sleepless nights in the Vatican these days.

The entire scandal has taken on a momentum now that no longer looks like it can be slowed down, much less stopped, even by those with the most to lose — meaning members of the hierarchy.

The Silence Stops Now rally, for example, planned for the bishops' annual meeting in Baltimore this coming November, has quickly picked up steam, as almost 1,400 fed up, faithful Catholics to date have committed to descending on Baltimore asking for an end to episcopal malfeasance and for those responsible to suffer the consequences and be removed from office.

And just yesterday, the first bishop to call out the actual root of the problem — Madison, Wisconsin's Robert Morlino — issued a lengthy statement which included this sobering truth:

"In the specific situations at hand, we are talking about deviant sexual — almost exclusively homosexual — acts by clerics. We're also talking about homosexual propositions and abuses against seminarians and young priests by powerful priests, bishops and cardinals."

For emphasis and clarity, Morlino added, "It is time to admit that there is a homosexual subculture within the hierarchy of the Catholic Church that is wreaking great devastation in the vineyard of the Lord."

The specific calling out of homosexuality within the hierarchy is why we here at Church Militant have called this series of special reports "Episcopal Sodomy," because it is quite clear that that is the issue underlying all this disaster.

Deep analysis of the Pennsylvania grand jury report reveals that three out of every four cases — 75 percent — of sexual predation was homosexual in nature, roughly the same findings from the John Jay Report in the aftermath of that 2002 disaster.

Many are looking first to see if Pope Francis follows through on his own guidelines to remove any bishop who has credible charges of covering up sexual abuse and removes Donald Wuerl from the College of Cardinals.

And a long list of notable lay faithful are now on record as saying the root problem is, in fact, homosexuality within the clergy and the episcopate. Even various priests around the country are now preaching that from their pulpits.

On the question of possible RICO violations, if that were to begin, it would be an almost certainty that the hundreds of millions of federal tax dollars flowing to the U.S. Conference of Catholic Bishops each year would cease immediately — likewise with various state bishops' conferences, which also get millions in federal money. 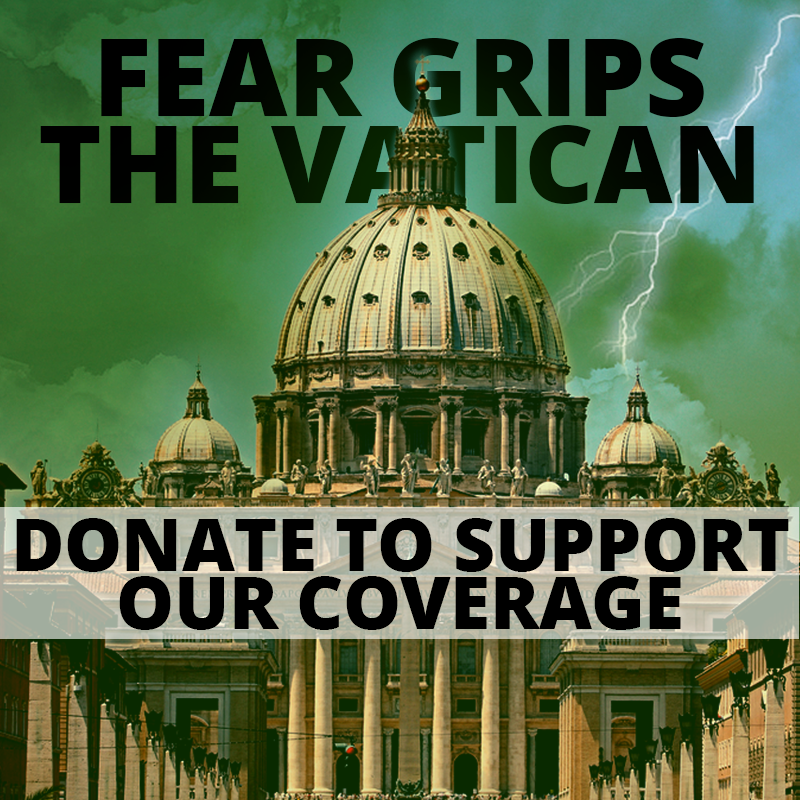 The financial impact of a RICO investigation by the U.S. Justice Department would essentially cripple the Church in America, and it would be felt instantly. And from a purely financial standpoint, the Vatican would feel that hit as well, since so much money flows from the United States to Rome each year through various channels.

The story is extremely fluid and constantly changing. Please stay tuned to Church Militant for our continuing coverage.

We have many sources feeding us a lot of information from behind the scenes and are dedicated to bringing you the most up-to-date and accurate information possible.

If you have not signed up for our Church Militant email where we first alert you to breaking news and developments, please do so now.

This moment is a potential sea change and has no parallel in the history of the Church in America. Rampant clerical and episcopal homosexuality has resulted in a full-blown meltdown of the Church, threatening almost Her very existence across this country.

What remains to be seen is if Pope Francis will indeed clean house like he did in Chile and avert a potential RICO investigation. Many are looking first to see if he follows through on his own guidelines to remove any bishop who has credible charges of covering up sexual abuse and removes Donald Wuerl from the College of Cardinals.

The wheels are now in motion for things to begin happening.