In an 11-page confession of everything he knows about homosexual predation and silence with regard to it, written on the Feast of the Queenship of Mary — Aug. 22 — former papal nuncio and Vatican ambassador to the United States, Abp. Carlo Maria Viganò, has outed numerous senior members of the hierarchy and said Pope Francis must resign:

The homosexual networks present in the Church must be eradicated. ... These homosexual networks, which are now widespread in many dioceses, seminaries, religious orders, etc., act under the concealment of secrecy and lies with the power of octopus tentacles, and strangle innocent victims and priestly vocations, and are strangling the entire Church.

In the matter of Pope Francis needing to step down, he could have not been more direct:

In this extremely dramatic moment for the universal Church, he must acknowledge his mistakes and, in keeping with the proclaimed principle of zero tolerance, Pope Francis must be the first to set a good example for cardinals and bishops who covered up McCarrick's abuses and resign along with all of them.

In breathtaking manner, Viganò went on to begin outing homosexual cardinals and archbishops and those who have participated in the homosexual network for a variety of reasons.

He blasted Donald Wuerl for lying and covering up McCarrick's homosexual predation. Wuerl is now denying the allegations, offering a lawyerly response this morning claiming he did not receive "documentation or information from the Holy See specific to Cardinal McCarrick's behavior."

And then Viganò just continued down the list of every homoheretic who has seized control of the Church: Cdl. Pietro Parolin, current Vatican secretary of state; Cdl. Tarcisio Bertone, whom he singled out for routinely recommending known homosexuals for being advanced to bishop.

He continued the list of various curia members, each one complicit for being homosexual or having advanced their careers by willfully cooperating with the homo-network: Cdl. William Levada, former archbishop of San Francisco and prefect of the Congregation for the Doctrine of the Faith; Cdl. Lorenzo Baldisseri, who manipulated the two synods in Rome in 2014 and 2015 to create a pro-gay outcome that was announced daily by homosexualist priest Thomas Rosica.

He also called out Cdl. Francesco Coccopalmerio and Abp. Vincenzo Paglia for belonging to "the homosexual current in favor of subverting Catholic doctrine on homosexuality."

He also called out Cdl. Edwin O'Brien — the focus of Church Militant's most recent special report — the homosexualist cardinal who had deformed many men in the seminary of the archdiocese of New York while he was rector and set up the gay collective that runs New York right now, with the knowledge and complicity of Cdl. Timothy Dolan.

He laid out how Joseph Tobin of Newark and Blase Cupich of Chicago both became cardinals through the recommendations of a homosexual cabal of McCarrick, Wuerl and Maradiaga, heavily pushing for them to become cardinals so they could advance homosexuality and pervert the Church's doctrine.

He said that Cdl. Kevin Farrell cannot be believed when he says he knew nothing of McCarrick — in essence, he is lying too.

And even Cdl. Sean O'Malley did not escape Viganò's condemnation, saying O'Malley has now lost all credibility for his statements and actions regarding McCarrick.

He assailed Bps. Paul Bootkoski of Metuchen, New Jersey and John Myers of Newark — who each took over for McCarrick — for keeping silent when they knew.

He also didn't spare Fr. James Martin, who has done as much as anyone in the Church to pervert minds. He said of Martin that he was chosen to "corrupt young people" and is an example of the "deviated wing" of the Jesuits — which is the majority wing.

Many small insignificant lay Catholics — like Church Militant — have, for years, been pointing at the homosexual network in the Church and have for years been vilified by the Church Establishment for it — unsurprising since the Establishment has been controlled by this gay mafia.

Pope Francis must be the first to set a good example for cardinals and bishops who covered up McCarrick's abuses and resign along with all of them.

Various Establishment types, even this past week, have gone out of their way to say this is not a homosexual problem — people like Detroit archdiocesan spokesman Msgr. Michael Bugarin who gave a radio interview and said it has nothing to do with homosexuality; or Bill Donohue, who, while admitting there's "gay stuff" going on, has defended tooth and nail the lying Donald Wuerl, who helped set him up at the Catholic League so he could pull down a half million dollars a year.

Bishop Joseph Strickland of Tyler, Texas has been the first bishop to issue a statement on this explosive news, saying, "Let us be clear that they are still allegations but as your shepherd I find them to be credible."

There is much to talk about in the coming hours and days and weeks, and you may rest assured that Church Militant will continue to bring you all the developments on this question of episcopal sodomy, which we have been doing for nearly a decade. There's no way after all this we are stopping now.

What is noteworthy above all, Viganòs 11-page unparalleled tell-all admission came — as said at the top of the special report — on the Feast of the Queenship of Mary. 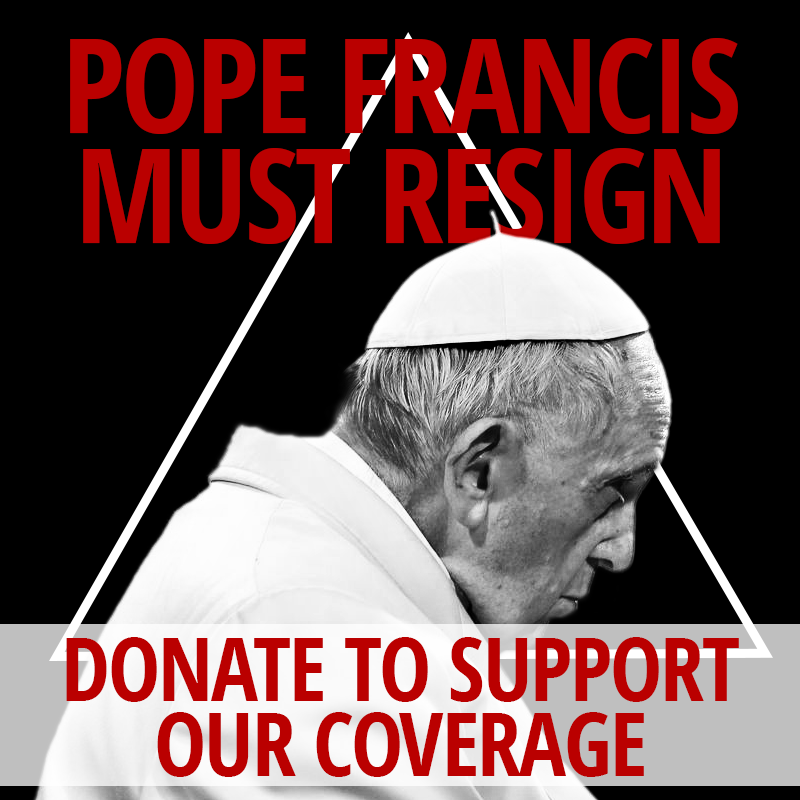 He said he wrote it and went public "to discharge my conscience before God of my responsibilities as bishop of the universal Church. I am an old man and I want to present myself to God with a clean conscience."

What is happening is completely without precedent in the Church. For much of the last 100 years, active homosexuals have infiltrated the Church through the seminaries, initially through orders from Soviet dictator Joseph Stalin, and then, in ensuing generations, have advanced up the ecclesiastical ladder to high positions — even penetrating into the Curia itself.

These homoheretics have covered for and protected one another for decades, including the rape and sexual abuse of not only children, but also young men — many in seminary.

The revelations about Theodore McCarrick made public on June 20 was the match that lit the fuse, leading to this massive massive explosion which now looks like it may not just bring down Cdl. Wuerl, not just a few other bishops and cardinals, but Pope Francis himself.

Viganò says flatly: They all knew, and he had no desire to go to meet Our Lord when he died with that on his conscience.

Church Militant is putting together an in-depth special covering all of this and are going into planning for that right after this special report concludes.

Stay tuned to Church Militant fo expert analysis, commentary and the latest developments on this tremendous day of victory for the Queen of Heaven.