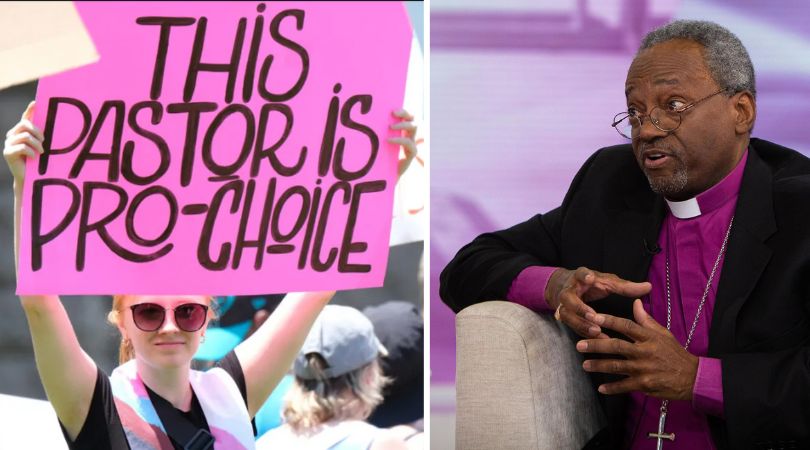 "We intentionally designed this liturgy so that all have space to be together in the presence of the Holy One in a time of grief, fear, confusion, hurt and lament," a preface to the service stated, urging the "wider church" and "ecumenical friends" to consider the liturgy as a "gift."

The "Service of Lament and Healing" uses a litany based on the famous prayer of St. Francis of Assisi to "pray for an end to the dehumanization of those who claim autonomy of body and mind" and "have already been shamed and belittled and caused harm by their choices to seek reproductive health care."

"We pray for the day when health care providers, women and their families can exercise their rights to reproductive choice in security and peace," the litany reads. It prays especially "for all who will be disproportionately affected by a lack of reproductive rights, especially people who are Black, indigenous, Asian, Brown, people of color, trans and nonbinary."

While praying for "the loss of life yet to come from forced childbirth and illegal abortion," the service does not once remember in prayer the 62 million babies savagely dismembered since the inception of Roe v. Wade in 1973.

The Anglican denomination made sex an end in itself from the moment it validated contraception at the 1930 Lambeth Conference.

The pro-abortion liturgy uses Psalm 139 as one of its Scripture readings. Ironically, the psalm contains some of the most pro-life verses, praising God for having "formed my inward parts" and "knitted me together in my mother's womb."

The Episcopal Church or TEC has been an "officially sponsored dialogue partner" of the United States Conference of Catholic Bishops since 1965, despite a 1967 TEC ruling unequivocally opposing any legislation "which would abridge or deny the right of individuals to reach informed decisions [about the termination of pregnancy] and to act upon them."

TEC presiding bishop Michael Curry said he was "deeply grieved" by the Supreme Court's pro-life ruling since TEC regards abortion as "an integral part of a woman's struggle to assert her dignity and worth as a human being" (2018-D032).

The church holds that "reproductive health procedures should be treated as all other medical procedures, and not singled out or omitted by or because of gender," Curry asserted.

Reproductive health procedures should be treated as all other medical procedures.

Archbishop of Canterbury Justin Welby, spiritual leader of the worldwide Anglican Communion, of which TEC is a province, did not comment on the SCOTUS ruling. Welby, a close ally of Pope Francis, has always equivocated on the morality of abortion.

Speaking to Church Militant, Dr. Gavin Ashenden, former queen's chaplain and a recent convert to Catholicism, explained how "the Anglican denomination made sex an end in itself from the moment it validated contraception at the 1930 Lambeth Conference."

From this rupture with revelation and Catholic theology, flowed a corruption of sex that has developed into the perversity of the celebration of homosexuality and the killing of babies in the womb. The service of lament ought to have been an act of penitence for the murder of children. Instead, it laments any frustration of eroticism.

"Pope Pius XI was so distressed by this defection from, we may say, the common view of humanity in the natural law, that he wrote his encyclical Casti Connubii in reply," Pakaluk observes, adding that "the resolution was infamous, even in its day, because it flatly contradicted the Lambeth Conference of 1920."

Resolution 68 of the Lambeth Conference in 1920 had uttered an "emphatic warning against the use of unnatural means for the avoidance of conception, together with the grave dangers — physical, moral and religious — thereby incurred."

Meanwhile, the USCCB's other dialogue partners, like the United Methodist Church and the Presbyterian Church (USA), also condemned the SCOTUS overturning of Roe v. Wade.

"We grieve and lament today's decision," a UMC statement announced. "Today, the United States Supreme Court decision denied the value and dignity of women to access the fundamental right to the supportive care and services they deserve."

The UMC's official position on abortion is: "We recognize tragic conflicts of life with life that may justify abortion, and, in such cases, we support the legal option of abortion under proper medical procedures by certified medical providers."

The resolution was infamous even in its day because it flatly contradicted the Lambeth Conference of 1920.

Speaking at the PCUSA General Assembly at the same time news of the overturning of Roe v. Wade broke, moderator David Ammons stated, "We've been officially pro-choice [as a denomination] longer than I've been a Presbyterian."

In 1861, as the nation was moving toward Civil War, presiding bishop John Henry Hopkins, who was bishop of Vermont (one of the first states to put in place provisions to end slavery), published an extended defense of slavery, arguing that slavery was present in Scripture and was legal.

TEC also did not challenge legalized segregation and discrimination against African Americans.

Ironically, on the day the Supreme Court released its ruling overturning Roe v. Wade, the PCUSA approved motions "offering an apology to African Americans for the sin of slavery and its legacy."

Similarly, on the question of sodomy, Dr. Darel E. Paul, in his bestseller From Tolerance to Equality: How Elites Brought America to Same-Sex Marriage, demonstrates how seven of America's largest Protestant denominations normalized homosexuality by the end of 2016.