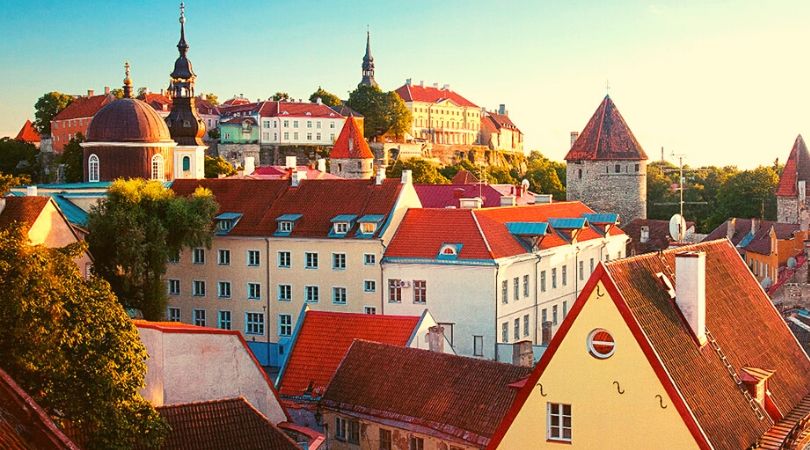 TALLINN, Estonia (ChurchMilitant.com) - The post-Christian European country of Estonia is now consecrated to the Sacred Heart of Jesus.

On Divine Mercy Sunday, Bp. Philippe Jourdan, the apostolic administrator of Estonia, consecrated the former Soviet bloc nation, where just 1% of the population is Catholic. Bishop Jourdan is seeking divine assistance, not only to end the current pandemic, but also to bring Estonians back to God.

"We believe that God doesn't want bad things to happen to us, but we use them also for personal conversion," said Jourdan.

The bishop explained that performing the consecration on Divine Mercy Sunday was appropriate, as the Divine Mercy devotion is prevalent throughout the Baltic nations. This devotion is due in part to the fact that Our Lord appeared several times to the mystic St. Faustina Kowalska in neighboring Lithuania.

The country is suffering physically with more than 1,500 Estonians having contracted the Wuhan virus and 40 others having died from related illnesses. Of the three Baltic states, Estonia has been hit hardest by the virus. Bringing relief to Estonians suffering from these physical ailments was one of Jourdan's main priorities.

The Estonian island of Saaremaa has been ground zero for the devastation. A large proportion of the island's inhabitants have reportedly been infected. More than half of all Estonians currently hospitalized are from Saaremaa.

People have the possibility to live a sacramental life.

Speaking with Vatican News on Monday, Jourdan described the situation of Catholics on the island of Saaremaa as most dire.

"The island is completely isolated," lamented Jourdan. "Some Catholics are living there, and they are under complete lockdown."

He explained that the rest of Estonia has restrictions on gatherings of more than two people but isn't in total lockdown. Public Masses, he said, are not able to be attended but are livestreamed. He clarified, however, that people are allowed to pray in churches and can receive the sacraments of the Eucharist and confession on an individual basis.

"At least churches are open," remarked Jourdan, "so people can come pray before the Blessed Sacrament, receive Holy Communion — with all the necessary precautions — and receive the sacrament of confession. In a certain sense, people have the possibility to live a sacramental life."

The greater crisis in Estonia, however, is spiritual. A religious survey released in 2018 found that 80% of Estonia's young people are without any religious affiliation. The research also indicated that more than two-thirds of the younger generation never pray to God.

Of the remaining 19% who do believe in God, most are Christian Orthodox, with 3% being Protestant and only 1% identifying as Catholic. This small flock, however, seems to be quite generous, according to Jourdan.

The bishop claims they're helping shut-ins by offering to do the shopping for them. In addition, he notes they are still making donations to the churches in spite of not attending public Mass.

"People feel that the Church is not just an organization providing services but is their family," he commented.

Consecrating his country as a way of bringing Estonians back to God seems to contrast the lack of a spiritual approach Jourdan evidenced last year. Asked in November about how he would tackle the growing secularization in Estonia, Jourdan admitted he didn't have a plan.

"If I had a recipe against secularization," Jourdan then exclaimed, "I would have published it, and of course used it long ago!"