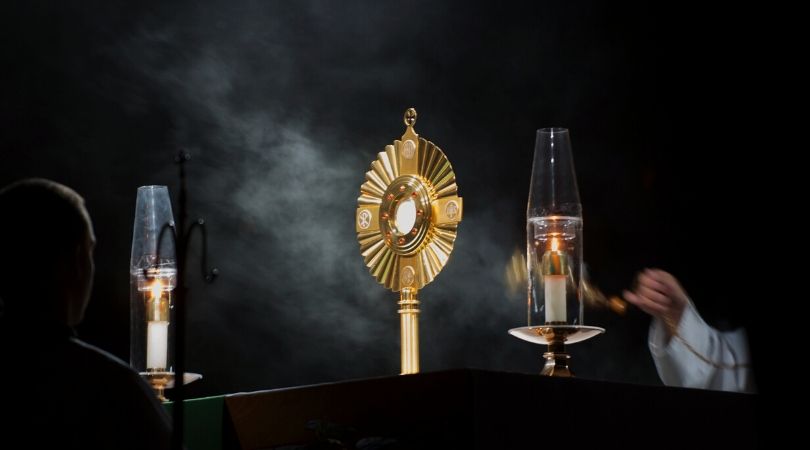 Msgr. Anthony Wassel, associate of the Apostolate for Perpetual Eucharistic Adoration, who hosted perpetual adoration in his parish in the Philadelphia-area diocese of Allentown for almost 30 years, concurs:

We senior citizens have lived to see the truth of St. Peter Julian Eymard's statement. Since the late 1960s and early 1970s, we have seen a sharp decline in eucharistic adoration and an increase of violence in our streets and even in our schools. Prior to those years, the churches were full of people attending 40-hour devotions in every parish. All parishes had Corpus Christi processions, and all parishioners participated in those processions.

Wassel also claimed: "With the lessening of eucharistic adoration, crimes have greatly increased because Satan becomes more present and powerful, as St. Peter Julian told us." As examples, he pointed to the many innocent children being shot and killed in our schools, as well as the countless killed in abortion.

Nature (as well as supernature) abhors a vacuum. As our first two parents — Adam and Eve — found out the hard way, when God is kicked out, something immediately fills the spiritual void to take His place.

If Catholics were truly Catholic our abortion society would not exist.

"Since the decline of eucharistic adoration," Wassel said, "the Supreme Court has outlawed prayer in our schools and God has been expelled. And when the same court legalized abortion, the court also aborted God out of our country and Satan is taking control of our nation." And the domino effect continues.

Dr. Bernard Nathanson, renowned New York abortionist before his conversion to the Catholic faith, lamented that if Catholics were truly Catholic, our abortion society would not exist.

"After he became Catholic," Wassel wrote, "he (Nathanson) said that ... if we had done enough, abortion clinics would not have been opened. He is telling us we need all our Catholic people to make holy hours of adoration and everybody saying the daily Rosary and Chaplet of Divine Mercy."

Then Wassel reminded us of the old adage reflected in the gospels: To whom much is given, much will be expected.

"To outlaw abortion," Wassel said, "depends primarily on us Catholics because our Protestant brothers and sisters do not have the Eucharist to adore and have no devotion to the Blessed Mother, the Rosary or the Chaplet of Divine Mercy."

From 2008–2010, Ciudad Juárez in northern Mexico was listed as one of the most dangerous cities in the world. Drugs, gang violence and murder rates were sky high, and the police could do little about it.

Father Patrico Hileman believes the drastic change is due to eucharistic adoration. "When a parish adores God day and night, the city is transformed," said Fr. Hileman, not to be confused with Fr. Richard Heilman of United States Grace Force from the diocese of Madison.

For the first two months of eucharistic adoration, no deaths were recorded in Juárez.

The prosecuting attorney for the city of Juárez apparently concurred.

"There is no other place in the world that has managed to turn itself around so quickly," he said. When missionaries opened the first perpetual adoration chapel in Juárez in 2013, "Forty people a day were dying because two drug gangs were fighting over the city to move drugs into the United States."

There was an ongoing drug war between two rival gangs; one included a group of soldiers and the other was protected by the police. There seemed to be no end in sight. Desperate, one of the parishes asked the missionaries to open a perpetual adoration chapel, because, as the locals feared, "only Jesus is going to save us from this ... ."

When some of the soldiers from one of the rival gangs saw six women praying in the newly established chapel, one fell down holding his gun, crying in front of Jesus in the Eucharist. "Do you think you're protecting us? We're praying for you 24 hours a day," the women told them.

For the first two months of eucharistic adoration, no deaths were recorded in Juárez.

Two scientific studies were conducted in 2013 that indicate religious faith and its practice does help reduce violent crime in communities.

Interestingly, a Baylor University study of more than 15,000 people ages 18 to 28 concludes that while young adults who considered themselves religious were less likely than others to commit violent or property crimes, those who claimed to be "spiritual but not religious," i.e., not being part of any organized religion, were more likely to engage in both types of criminal activity.

A different study analyzing crime and religion data from 182 counties in three states, found that violent crime decreased as greater numbers of people in the community were religiously active. This was particularly pronounced in black and disadvantaged high-crime communities.

"In the big picture, religious presence seems to matter to the amount of violence and crime in a community," said Jeffery Ulmer, professor of sociology and crime, law and justice at Pennsylvania State University, who led the study.

Many saints and popes throughout Church history have had a deep devotion to Jesus in the Blessed Sacrament.

Pope Emeritus Benedict XVI, recognizing that God's voice is heard in silence, once said: "In a world where there is so much noise, so much bewilderment, there is a need for silent adoration of Jesus concealed in the Host. Be assiduous in the prayer of adoration and teach it to the faithful. It is a source of comfort and light, particularly to those who are suffering."