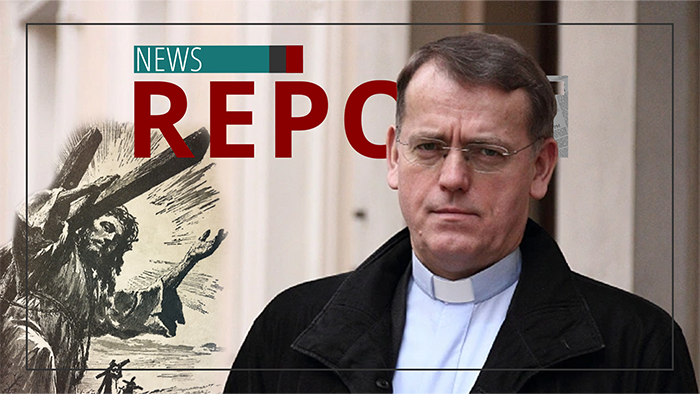 Freedom of expression vs. gay totalitarianism

Pope Francis: "Everyone writes about the gay lobby. I still haven't found anyone who gives me an identity card in the Vatican with 'gay' written on it."

While Cdl. Joseph Zen is set to appear in court for upholding the Faith in Hong Kong, a faithful Polish theologian has been disciplined by a German court for daring to criticize homosexuality.

Father Dariusz Oko stood trial today, May 20, in Cologne for launching an academic discussion on the homosexual lobby operating within the Church. The professor at the Pontifical University of John Paul II in Kraków describes his high-profile trial as "a clash of the Church of martyrs with the church of Sodom and Gomorrah."

Oko's 2020 article titled "On the Need to Curb Homosexual Cliques in the Church" unpacked the operations of the lavender mafia and triggered LGBT activists.

Fr. Dariusz Oko, Ph.D.: "Just like in the military, in the police, in the world of art, for example, once a person with homosexual tendencies gets into a position of power, usually the subordinates that he nominates are also homosexuals. ... The same thing is happening in the Church."

Wolfgang Rothe, an openly gay, scandal-plagued priest of the archdiocese of Munich, reported Oko to Germany's court "for incitement to hatred." Despite Oko's maintaining his innocence, the court ordered him to pay over 3000 euros to charity. Oko says he's compelled to defend boys and young clergymen from the international homosexual crime group.

Oko's lawyers see the charges as a breach of the Universal Declaration of Human Rights' assurance that "everyone has the right to freedom of opinion and expression."

Oko has biblical teaching behind him, as well as the Catholic Catechism, which teaches homosexual acts are "intrinsically immoral." German cardinal Gerhard Müller recently praised Oko for speaking out against homo-heresy: "As a German, I am ashamed that it is again possible in my homeland that a Polish scholar could be convicted of so-called incitement to hatred on the basis of a factual report."

Many see that Rothe is riding the waves of the radical German Synodal Way — a second Lutheran reformation, this time a homosexual one  — that threatens to rip the Church asunder.

After court proceedings today, Fr. Oko called the verdict a "draw," which, for him, he says is victory. His opponents were hoping for his imprisonment. But Oko's lawyer said it was a hard day for them — you could tell by their faces they were very unhappy.