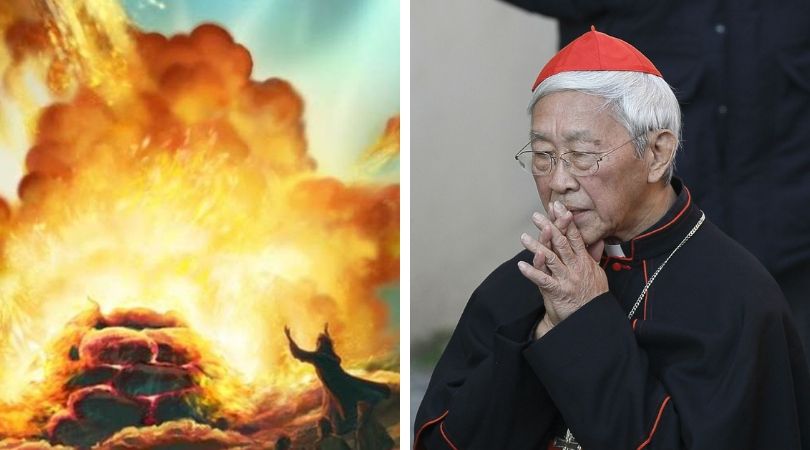 Embattled Hong Kong cardinal: 'We have to defend ourselves'

Christian persecution in Communist China has been on the rise as the People's Republic of China (PRC) has become increasingly antithetical to religious liberty.

The Vatican-China agreement reached in September 2018 has intensified the PRC's animosity toward the underground Catholic Church in China and left a wake of confusion for faithful Catholics in China and abroad.

Recent guidelines from the Holy See regarding Catholic clergy registering with the Chinese Patriotic Catholic Association, an arm of the Chinese Communist Party, has fueled confusion on top of confusion.

Cardinal Joseph Zen, who has been an outspoken champion of the Catholic faith, met with Pope Francis in early July. He graciously granted Church Militant a phone interview on Tuesday.

Church Militant: If you are free to say, what did Pope Francis and you discuss when you met in early July?

Cardinal Joseph Zen: I wanted to discuss with the Holy Father the most recent document from the so-called Holy See, [a document] without a specification of the [issuing] department and without a signature from any responsible officer.

The Pope told me that I could go to talk to the secretary of state, Cdl. [Pietro] Parolin. I answered that that would be useless because there is no hope I can convince him, and no hope that he can convince me. I said that I would like to speak with Parolin in front of the Holy Father, but since that is impossible, I said I would go home empty-handed.

But then, the following day, the Pope invited me to supper together with Parolin. That was very kind of him and so I went to supper. Obviously, you cannot have a discussion during supper, so I talked about what is happening in Hong Kong. Only at the end of the supper did I mention to the Holy Father that I had given him in writing what I would say in such a discussion.

"What about that?" I asked him. The Holy Father said, "OK, I'm going to take care of that; I am going to look into the matter." So that means that there is no possibility for any immediate discussion; he was very kind to invite me to supper and also to promise that he would look into the matter, but for the moment, I have received no exact answer.

So, I returned to Hong Kong empty-handed. But I cannot complain because I suppose the Holy Father was very busy; that was the evening before he met Putin [July 4]. So, I had to be satisfied with his promise that he would look into the matter.

CM: Is the persecution greater now for the underground Catholic Church in China since the Vatican-China agreement was reached in September 2018?

Cardinal Zen: Yes, it is obvious for anybody who follows the events on the news. It is really a terrible thing; the most worrisome element is that the agreement was a secret one, so we do not know what is in the agreement.

CM: What can the United States and other Western governments do to push Beijing into stopping the persecution of Christians and allowing religious liberty?

Cardinal Zen: I think it is a duty for everybody who knows the reality to say something, but I don't see much hope for any success because now they [the Chinese Communist Party] feel that they are powerful and so they can despise anybody's words.

They feel free to do anything they like because they are strong now. So, it is a terrible position. But we do well to keep raising our voices. So, I hope there is still some honest and intelligent people in government that may pay attention to those words. So, I encourage you to do this ― maybe without success, but it is our duty to do that.

CM: What words of encouragement do you have for those in the underground Church in China?

Cardinal Zen: At this moment, it is very difficult to give advice because I have no authority, but generally, when people ask me, I say, "If you hear that the Holy See is allowing you to do this or that, and you do this or that, I would not blame you because it is OK to follow the instructions of the Holy See. But then, you must always ask about your conscience ― whether those guidelines are correct. If your conscience says, 'No, they are making a mistake,' then your conscience is the last counsel for your actions. But never rebel; just quietly accept the consequences of the situation. So, if the government takes away your churches, just let them take them. If you are a priest and you are no longer allowed to say Mass because you didn't sign the government document, then go home."

You can never renounce your faith; but in difficult times, you can renounce the benefits of the sacraments [because they are not available] because God is able to give grace even outside of the sacraments. If they do not allow you to say Mass for the faithful, then go home and tell the people to pray in their homes. Offer your sacrifice and hope for better times. Maybe, they are coming soon ― better times ― maybe it will be a long time; we put ourselves in the hands of God.

CM: How can English-speaking Catholics outside of China best help their brothers and sisters in China?

Cardinal Zen: You have to pray for them. And then, always be well-informed so that you know what you are praying for. Sometimes, people ― even good people ― are not well-informed. So, they may hold a wrong position sometimes. People talk about forgiveness, harmony, dialogue, trust; those are surely good things.

But sometimes you may be in a position where you are convinced that others are not honest; they just want to destroy your faith. And then, you cannot trust them. You have to be dissident. You have to defend yourself. I always say, "Can you imagine St. Joseph bringing the infant Jesus to go to dialogue with Herod?" That would be foolish. And so, it is not always possible to trust people.

The Pope St. John Paul II always used to say "we" and "them" ― and so we are different. Even in our prayers, we mention enemies. We hate nobody, but there are people who are our enemies because they want to destroy our faith. We have to defend ourselves. We have to ask God to protect us, [to strengthen us] to fight them.

It is a right and a duty to fight for one's life and for one's faith. So, I think we have to be careful because our fundamental attitude is surely always one of trust, harmony and dialogue, but sometimes, we have to pray for the conversion of our enemies. But we cannot trust them because there is no foundation for any trust. If we trust them, then we put ourselves in danger ― put our faith in danger.

CM: Upon returning from China, Bp. Marcelo Sorondo spoke to La Stampa in February 2018. He spoke highly of the People's Republic of China, saying that it has "defended the dignity of the human person."

"Right now, those who are best implementing the social doctrine of the Church are the Chinese," he added.

What are your thoughts on Bp. Sordono's comments?

Cardinal Zen: I think the whole world laughs at him. That is very unfortunate. But it is more unfortunate that people around the Pope sometimes make him say similar things. That is really sad. The people laugh at our pope because he is not well-informed.

The people around him, especially this Cdl. Parolin ― he knows everything [about China], he has a lot of experience ― he knows how evil the Communists are, but I am sure he is not giving the right information to the Holy Father. So, sometimes the Holy Father says things that make people laugh at him. That is a pity. That is terrible. That makes us so sad.

CM: Do you have anything else you would like to say to the English-speaking world?

Cardinal Zen: Keep praying; keep praying. Today is the Feast of Our Lady of Mount Carmel [July 16]. I made a pilgrimage today, walking two hours to the monastery; we have a Carmelite monastery here in Hong Kong. So, I went to the Mass and asked them to pray.

May God bless you. Keep praying.

God bless you and all your people. 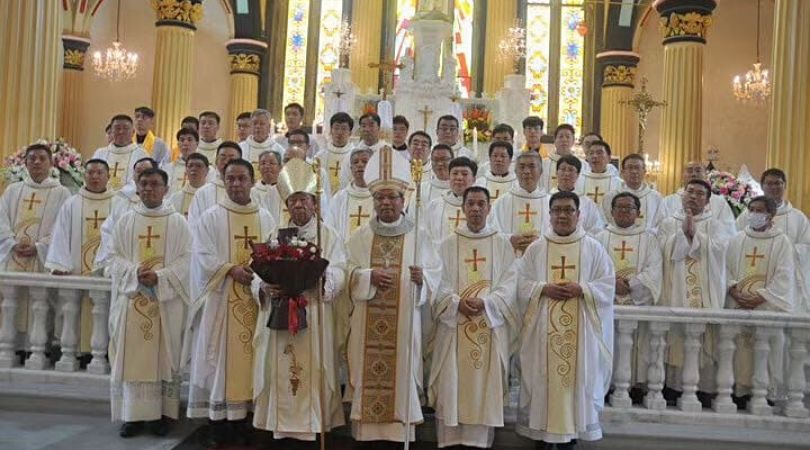