Steven Mosher: 'That's the recipe for the elimination of the Catholic Church, not tolerance of it'

FRONT ROYAL, Va. (ChurchMilitant.com) - An exclusive interview with Chinese cultural expert sheds some light on why Vatican prelates are compromising with China's Communist government at the expense of the Church.

Mosher traveled to Rome earlier this summer to talk directly with Vatican prelates "to find out what these officials thought the Church would gain from inking an agreement with the Chinese Communist Party."

He said he's been trying to get them "to understand the nature of the regime they're dealing with" and that their purpose is contrary to everything the Catholic Church stands for.

The Vatican has been communicating with the Chinese government since 2005 when the disgraced former cardinal Theodore McCarrick traveled to China to meet with Communist Party officials for the first time. Mosher explained McCarrick mentioned commonalities between Pope Francis and the president of China, Xi Jinping, and their concern for social issues.

"I don't see any commonalities at all between the Catholic Church and the Chinese Communist Party," Mosher noted.

He said some Church officials who are reluctant to talk about personal morality are swept away by the claims of the Communist Party that they have made great strides in social policies.

"It makes them uncomfortable to talk about personal morality if they're not living the commandments," he said, adding:

It's much, much easier to talk about the social teaching of the Church because that's not an individual obligation, it's a communal obligation, a social obligation that doesn't create a kind of cognitive dissonance in their minds and the kind of conflicts in their mind that talking about, for example, avoiding homosexual behavior requires.

Mosher explained that if a bishop or priest is "not living the Faith with regards to personal morality, he will want to duck that question and segue off into unchallenging talk ... which puts no demands on his conscience or own personal behavior."

He said Cdl. Blase Cupich's recent statement about "not going to go down a rabbit hole," is an example of a desperate attempt to change the subject away from personal morality because of internal conflicts.

Mosher said Jinping is the new "Red Emperor" who has "more power than Mao Zedong." Jinping has control of both the government and the military, something that Mao Zedong didn't. Using the guise of an "anti-corruption campaign," Jinping is purging his enemies from the Communist Party. Over 1.5 million government officials in the past five years have been brought up on corruption charges — but not one of Jinping's supporters, Mosher explained.

In January, after the Vatican asked two legitimate bishops to resign so Patriotic Church bishops could be installed, China's highest-ranking prelate, Cdl. Joseph Zen, blasted the Vatican for "selling out" and caving to the demands of the Communist leaders. Cardinal Zen wrote an open letter to the media, saying Pope Francis "doesn't know the Chinese communists" and "the people around him are not good at all." He blasted the Vatican, saying, "They have very wrong ideas."

Cardinal Zen is exactly the kind of person that the Vatican should be relying upon for information.

Mosher agreed with Cdl. Zen's assessment that the Vatican does not understand the Communist Party. He explained the China that is presented to casual visitors and diplomats is not the same China that those fluent in the language see. These people are met by a delegation of officials that wine and dine them at five-star hotels and leave them "feeling pretty good about China." He said because they are either followed or escorted everywhere, these visitors never meet ordinary people or those in the underground Church.

"Cardinal Zen is exactly the kind of person that the Vatican should be relying upon for information and for the formulation of strategy about how to deal with the Communist Party," Mosher said.

Additionally, because of the language barrier, most visitors have no idea what is really going on and only know what the government "minders" are telling them.

"They haven't seen the real China," he said. "They've lived in kind of an alternate reality" during their trip, noting that this is a common phenomenon with many visitors who then come back "singing the praises of the regime."

An example of this was in February 2018, when Abp. Marcelo Sanchez Sorondo, the chancellor of the Pontifical Academy of Social Sciences, praised the Communist Party for not having slums, its low drug use and a "positive national conscience." Archbishop Sorondo said, "Right now, those who are best implementing the social doctrine of the Church are the Chinese."

Mosher said he spent four hours with Abp. Sorondo during his visit discussing the "fundamental disagreements" the Communist Party and the Catholic Church have on human rights issues such as abortion, forced sterilizations and poverty. Mosher said he had to explain to Abp. Sorondo the reason there are no slums outside of Bejing is that people aren't allowed to live in those slums. Internal passport controls instituted from the Communist Party force around one million of Bejing's poorest to live in crowded basements with five to 10 other people or in older housing that the Communist Party is quickly tearing down.

Last fall, Mosher said, the Bejing city government deemed there were too many people living in the city and summarily evicted three million people who had emigrated there for work but lacked the proper documentation.

"They were basically thrown out into the snow in the middle of winter," Mosher said.

The arrangement the Communist Party wants with the Catholic Church is a "rubber stamping" of who the Party picks to be the bishop, Mosher explained. The Party has said openly in the media that they do not want the "Viet Nam model," where the final choice for bishop is left to the Vatican and respects the authority of the Magisterium. The proposed "China model" leaves the final choice to the Communist Party, and if the Vatican doesn't approve, they can veto the candidate.

Mosher noted Cdl. Zen wondered how many times the Vatican can veto a candidate before the Party eventually ordains their candidate, overriding the authority of the Magisterium.

"At the end of the day, the Party will decide who's going to be the bishop," he said.

"The Communist Party is officially atheistic," Mosher explained. "Their policy is now to gradually eliminate the Catholic Church over time."

In February, Jinping instituted a new policy making it illegal to take children to Mass. It forces all Catholics, even those going to the underground Church, to register with the government and makes parish life activities like prayer meetings and catechism classes illegal. He said, "They want to limit the Catholic Church to celebrating Mass on Sunday."

"The Chinese Communist Party wants to be all things to all people," Mosher said. They are "almost insulted" that the Catholic Church would be filling the unmet needs of the Chinese people because the Party is supposed to be meeting all the needs of the people "on the journey to the socialist paradise."

"That's the recipe for the elimination of the Catholic Church, not tolerance of it," Mosher explained.

Mosher said there is much more on the topic in his book, The Bully of Asia. 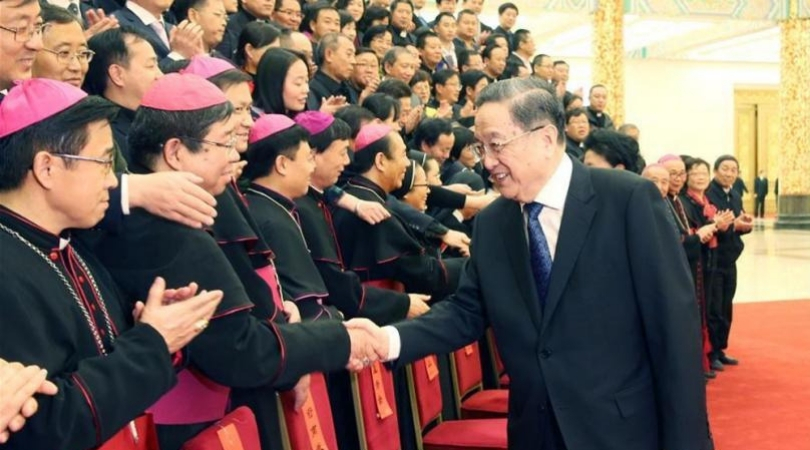