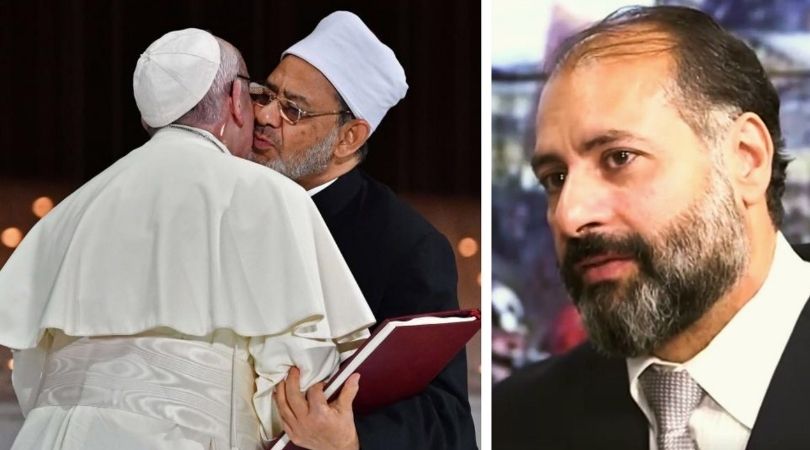 VATICAN CITY (ChurchMilitant.com) - A top Arabic scholar is exposing the "two-facedness" of Pope Francis' Muslim dialogue partner and the failure of the pontiff's Human Fraternity pact to stem the escalating persecution of Christians in the Islamic world.

Islamic historian Raymond Ibrahim is blasting grand imam of al-Azhar Ahmed al-Tayyeb for "repeatedly contradicting all the lofty sentiments in the document he signed with the pope," as the Holy See marks the anniversary of the Abu Dhabi deal, which was signed Feb. 4, 2019.

On Thursday, Francis and al-Tayyeb will participate in a virtual event hosted in Abu Dhabi to celebrate the International Day of Human Fraternity — a day now set apart by the United Nations General Assembly as an annual event.

At his Wednesday public audience, Francis said he was pleased that "the nations of the entire world are joining in this celebration, aimed at promoting interreligious and intercultural dialogue."

In an exclusive interview with Church Militant, Ibrahim called out the "doublespeak" of Sheikh al-Tayyeb "if only when speaking in Arabic and appearing on Arabic media, as opposed to when 'dialoguing' with naïve Western leaders who are all too eager to believe what they want to hear."

"For instance, the Document on Human Fraternity signed by al-Tayyeb emphatically insists on religious freedom, stating that 'the fact that people are forced to adhere to a certain religion or culture must be rejected,'" Ibrahim noted.

Ibrahim, author of recent bestseller Sword and Scimitar: Fourteen Centuries of War Between Islam and the West, explained that al-Tayyeb is on record quoting "those learned in Islamic law [al-fuqaha] and the imams of the four schools of jurisprudence" saying that apostates [converts from Islam] should be punished. To underscore the point, the top Islamic cleric cited a hadith [tradition], saying, "Whoever changes his Islamic religion, kill him."

If al-Tayyeb is a wolf in sheep's clothing, Francis is a starry-eyed shepherd leading — or at least leaving — his flock to the slaughter.

"So much for religious freedom," Ibrahim lamented, elaborating on how the grand imam "is renowned for turning a blind eye to the ongoing persecution of Egypt's most visible non-Muslim minorities, the Coptic Christians."

Despite the well-documented fact that Muslim mobs attack Christians almost "every two to three" days, al-Tayyeb told Coptic Pope Tawadros II, "Egypt represents the ultimate and supreme example of national unity" between Muslims and Christians, according to Ibrahim.

Some examples include the burning of churches and Christian homes, the coldblooded murder of a Coptic man defending his grandchild from Muslim bullies and the stripping, beating, and parading in the nude of a 70-year-old Christian woman, he added.

"The Grand Imam doesn't have a single word for the persecution and displacement of the Copts — his own Egyptian countrymen," remarked Ibrahim. "Instead, he claims that 'the Copts have been living in Egypt for over 14 centuries in safety, and there is no need for all this artificial concern over them,' adding that 'true terrorism was created by the West.'"

Ibrahim, who has acted as a consultant for the U.S. Strategic Command and the Defense Intelligence Agency, was born to Egyptian parents and has studied under renowned military historian Victor Davis Hanson.

Ibrahim told Church Militant that "far from speaking up for Egypt's Christian minorities," al-Tayyeb "has confirmed that they are 'infidels.'"

The Grand Imam is renowned for turning a blind eye to the ongoing persecution of Egypt's most visible non-Muslim minorities, the Coptic Christians.

While al-Tayyeb used the label in a technical manner — correctly saying that, as rejecters of Muhammad's prophecy, Christians are infidels [kafir] — he also knows that labeling them as such validates all the animosity they feel and experience in Egypt, since the mortal enemy of the Muslim is the infidel.

To demonstrate al-Tayyeb's duplicity, Ibrahim showed Church Militant an Arabic statement from the Cairo Institute for Human Rights, which reads: "In March 2016, before the German parliament, Sheikh al-Tayyeb made unequivocally clear that religious freedom is guaranteed by the Koran, while, in Cairo, he makes the exact opposite claims."

Ibrahim also named other Muslim commentators in Egypt who noted how al-Tayyeb had refused to denounce the Islamic State (ISIS) jihadists as "un-Islamic," despite al-Azhar's dogmatic position on "infidels" and "apostates."

Summing up his verdict on the futility of the Human Fraternity document, Ibrahim said:  "While secular Western talking heads who don't know the first thing about Islam continue squealing about how it is being 'misunderstood,' here is arguably the Muslim world's leading authority confirming many of the cardinal points held by ISIS."

Al-Tayyeb believes that Islam is not just a religion to be practiced privately but rather is a totalitarian system designed to govern the whole of society through the implementation of Sharia; he supports one of the most inhumane laws — punishment of the Muslim who wishes to leave Islam; he downplays the plight of Egypt's persecuted Christians, that is, when he's not inciting hatred against them by calling them "infidels" — the worst category in Islam's lexicon — even as he refuses to denounce the genocidal Islamic State likewise.

Al-Tayyeb's signature on the Human Fraternity pact "does not seem to be worth much —certainly not the fanfare surrounding it," the academic observed. "If al-Tayyeb is a wolf in sheep's clothing, Francis is a starry-eyed shepherd leading — or at least leaving — his flock to the slaughter."

"It's past high time he stopped playing 'harmless dove' and became 'wise as a serpent' — if only for the sake of millions of Christians being persecuted under Islam," Ibrahim urged.

Egypt is home to the largest Christian community in the Middle East. Officially, about 10% of the population of 95 million are Christian, although many believe the figure is significantly higher.