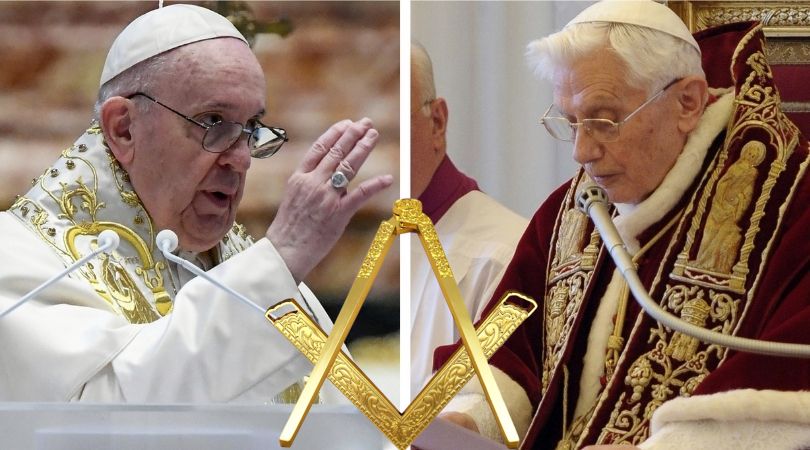 ROME (ChurchMilitant.com) - The Holy See Press Office conspired to coordinate mistranslations of Benedict's Latin Declaratio, the declaration of his resignation, an explosive Italian documentary is alleging.

The 40-minute Italian film, The Message in the Bottle, is reigniting the heated debate surrounding the canonical validity of Benedict XVI's resignation from the papacy on Feb. 11, 2013 and Francis' subsequent election to the See of St. Peter.

Released Friday, the production links the papal election of Cdl. Jorge Mario Bergoglio to the so-called St. Gallen Mafia in Switzerland and the Freemasonic agenda and genealogy of cardinals belonging to the controversial group.

The film explores the controversy surrounding canon 332 §2 of the Code of Canon Law (1983), which states that for a papal resignation to be valid, the resignation must be "made freely" and "properly manifested" (rite manifestatur).

Several notable canon lawyers and commentators have already pointed out that Pope Benedict XVI's resignation may not have been "properly manifested" because of a major error in the formula of resignation.

The formula errs in Benedict XVI using the Latin term ministerium (ministry) rather than munus (mandate) to resign his Petrine mandate, scholars argue. Benedict XVI even acknowledges retaining his role — the munus petrinum — in the first sentence of his Declaratio, they say.

Hence, he has not renounced the munus and the resignation is ambiguous at best.

The Message in the Bottle goes a step further in alleging that the Holy See Press Office gave "the whole world vernacular translations" that were deliberately mistranslated.

"As a translator I know that is a malicious conspiracy because you cannot coordinate the work of six different translators unless they are being told how to translate it by the same authority," Franciscan friar Alexis Bugnolo remarks in the documentary.

We liked to call ourselves 'the Mafia.'

"A possible mistake by Pope Benedict seems hard to believe. Besides being one of the finest Latinists, he took part directly along with Pope John Paul II in the modification of canon law and over the years he published articles about the introduction of the word 'munus,'" the film's narrator emphasizes.

With regards to Benedict using the term "renounce," the object munus is replaced by ministerium, the film observes. "Ministerium is not the duty you receive from the king, it's the execution of that," Bugnolo explains.

The documentary explores how the media ran with the resignation story after ANSA's Vatican correspondent Giovanna Chirri tweeted the news of Benedict's resignation as she understood the Latin reading of the Declaratio, Chirri says in the film.

The tweet, according to the film, was authorized by Fr. Federico Lombardi, the Jesuit former director of the Holy See Press Office. But the words "resigned" and "pontificate" were not in Benedict's statement," Bro. Bugnolo notes. "Chirri's tweet added meaning to it [resignation] that it didn't have."

Italian documentary with English subtitles: The Message in the Bottle

The Holy See then released the official translations and "I found undeniable signs of a conspiracy beginning in the end of February 2013 and going all the way to April for the publication of every translation," Bugnolo states.

"You have six languages — if you look at those languages you would expect that if they are a faithful translation, every variation of terminology in the Latin would show up in the translation."

Was there someone who wanted to manipulate his announcement?

But irrespective of whether Benedict mentions munus or ministerium, it is translated as "ministry," Bugnolo explains.

Because Benedict was always talking about "his ministry" and because the translations mistranslate the papal munus as "ministry," the media is given the impression that Benedict resigned his papacy, he adds.

The Vatican website has the original Latin text and translations in eight languages, but "was Pope Benedict aware of the manipulation?" asks the narrator in the film. "Was there someone who wanted to manipulate his announcement?" and "wanted him to resign?"

According to the film, the secret lobby of progressive cardinals known as the "Group of St. Gallen" led by liberal Belgian Cdl. Godfried Danneels were behind the conspiracy to dethrone Benedict and appoint a modernist pope who would implement their agenda.

Danneels admits in the film: "We liked to call ourselves 'the Mafia.'" In his autobiography, he reveals the group discussed the Church's acceptance of homosexuality, divorced and re-married couples, women's ordination and secularism. For Pope Francis' first appearance as pope, Danneels stood next to the new pontiff on the loggia.

The cardinals of the St. Gallen group trace their Masonic genealogy to the pro-Freemason Cdl. Mariano Rampolla del Tindaro, whose election by the conclave of 1903 was vetoed by Austrian Emperor Francis Joseph I, leading to the election of Giuseppe Sarto as Pope Pius X — a staunch opponent of modernism and Freemasonry.

"Bergoglio became a member of the group by moving 70 million euro out of archdiocesan funds to the Vatican bank ... in 2000 or 2002," and became the head of the group, says Bugnolo, arguing Bergoglio was recruited as he was seen to be an ally of Pope John Paul II.

A possible mistake by Pope Benedict seems hard to believe.

Experts interviewed in the documentary include the acclaimed philosopher Professor Francesco Lamendola, a faithful Catholic and prolific author who explains the philosophical underpinning of Freemasonry, its historical enmity with Catholicism and its agenda to impose a New World Order.

Church Militant has learned that the producer/director chose to remain anonymous for fear of repercussions from the Freemasons.

Italian critic and historian Andrea Cionci alerted Church Militant to the possibility that skeptics would dismiss the film as "conspiracy theory."

"But if a viewer wants to check out the truth of the documentary's claims, all it takes is a click, since most of the material cited is available on Vatican sites and credible newspapers," Cionci said.

"The highlight of the documentary is Benedict XVI's Declaratio, which, out of curious 'carelessness,' involves canons 124, 332 § 2, 188, 17 of the Code of Canon Law which, according to many experts, render the resignation completely null and void," he observed.

Cionci noted the real difficulty was "in focusing on and debating the real magna quaestio, that is, the invalidity of Ratzinger's renunciation. Bergoglio's election is entirely secondary. If Benedict did not abdicate, everything else never existed."

Thousands of Italians have watched the production on social media and Cionci's review in the Milanese secular newspaper Libero Quotidiano is commending the documentary as "well done and based on obvious facts."

Church Militant contacted Matteo Bruni, director of the Holy See Press Office for a response, but did not receive a reply.