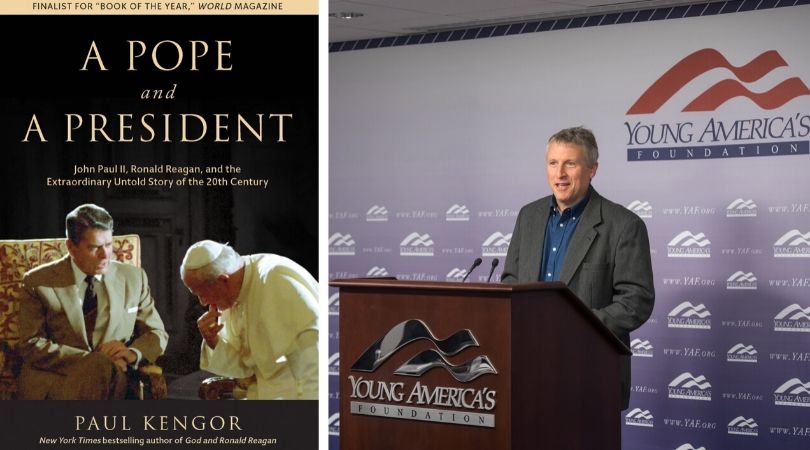 GROVE CITY, Pa. (ChurchMilitant.com) - White leftist students who are pushing the Marxist Black Lives Matter (BLM) agenda are campaigning to get an eminent Pope John Paul II scholar fired from his position at a Christian college for defending Western civilization and opposing communism.

The "white nationalist" libel against Professor Kengor as well as the call for him to quit was inserted after the petition had garnered most of its signatures, informed sources told Church Militant.

The activists removed the "white nationalist" accusation from the petition sometime on Saturday morning after a firestorm of outrage from alumni e-mailing and asserting that this was scurrilous and almost certainly libelous, sources added.

"We are now done with revisions based on student/alumni feedback," the petition's architect, Eve Ettinger, wrote Friday. "If you want to sign this before we send it out (Monday, June 15, 2020), please e-mail me the correct signature at ettingereve@gmail.com and I will add it."

Some signatories, including a certain Benjamin Dover from the graduating class of 1969, withdrew their names from the redacted petition.

Church Militant obtained both versions of the petition and confirmed the second version had been redacted and some of the libelous accusations removed.

Professor Kengor, author of bestselling A Pope and a President: John Paul II, Ronald Reagan, and the Extraordinary Untold Story of the 20th Century, told Church Militant that he's refraining from speaking out because he's in consultation with attorneys regarding the next steps he will take against the people who publicly smeared his character.

Kengor, a revert to Catholicism, is being urged by multiple sources to sue the petition writers for libel. He told Church Militant: "This is the most cruel and vicious and malicious and uncharitable thing that anyone has ever done to me." His opponents are liberal Protestants who are brandishing out-of-context Bible verses to attack his reputation.

The committed Catholic is an internationally recognized authority on multiple subjects, especially Ronald Reagan, the Cold War and communism, the American presidency and Pope John Paul II. He is a visiting fellow at the Hoover Institution on War, Revolution and Peace and has authored 11 books.

Dr. John Zmirak, a senior editor at The Stream — a national daily which has published columns by Kengor told Church Militant: "I looked at the half-baked pastiche of semiliterate smears that some disgruntled, leftist, ex-students (all of them white) posted in an effort to destroy him and gut Grove City College ... and I almost burst out laughing. Except that the consequences of these smear campaigns are all too real in the lives of free people trying to teach and write the truth."

Professor Kengor is a model scholar and educator. He is patient, humble, scrupulously fair and single-mindedly devoted to advancing freedom for every human being as the image of God. He is a worthy disciple of St. John Paul II, a man devoted to liberty, virtue and real human rights.

"It's sad that so many people these days cannot imagine such a thing and instead project their own ideological tribalism onto their betters, such as Kengor," Zmirak lamented.

Church Militant has confirmed that the activists spearheading the defamation campaign against Kengor are not black students, black activists or members of Black Lives Matter. "I don't think there's a single black person among the petitioner signers. No black person has called for Kengor to resign. The three leading the campaign are white female activists — alumni who went on to grad schools from Grove City College," a source said.

Kengor is a worthy disciple of St. John Paul II, a man devoted to liberty, virtue and real human rights.

Church Militant has learned that the petition's chief authors are Eve (Hännah) Ettinger, Megan Schmigdal (Crutcher), and April (Colson) O'Brien — the latter two are from the graduating class of 2001, while Ettinger graduated in 2011.

None of the petitioners, however, identify themselves as the authors in the petition and are careful to conceal their identity by merging their names with around 180 other signatories — mostly alumni dating as early as 1969 — when Kengor was 3 years old.

A source identified O'Brien as owner and creator of the Google doc version of the petition. "From there, it seems to have been taken over mainly by Megan Crutcher and especially by Eve Ettinger," the source revealed.

Ettinger and Crutcher are LGBTQ+ activists, sources disclosed. Kengor has been a vocal defender of the family in his book Takedown: From Communists to Progressives, How the Left Has Sabotaged Family and Marriage — a shocking expose of how leftists, from Karl Marx to Herbert Marcuse, have sought to take down biblical marriage, culminating in "gay marriage," which, according to Kengor, provides the long-sought vehicle for leftists to finally succeed in redefining the family and attacking Christianity.

This is the most cruel and vicious and malicious and uncharitable thing that anyone has ever done to me.

"Professors should be held accountable for both racism and committing microaggressions against black students and colleagues," the petition states, adding: "We are also deeply concerned about the rhetoric written and circulated by Paul Kengor and the Faith & Freedom think tank ... they reveal a deep-seated ideological commitment to rhetoric and ideas commonly held by white nationalists in far-right political spheres, rather than the often conservative and libertarian political beliefs held by the college at large."

Meanwhile, students have launched two responses defending Kengor. Alumnus Benjamin V. Allison, now a doctoral student at the University of Texas at Austin, notes in one response that "points related to Dr. Paul Kengor and the Institute for Faith & Freedom feature some fair critiques of their rhetoric but go too far, to the point of committing libel."

"Furthermore, I've heard from numerous people that their signatures have been forged on the original. And if you think Ben Dover graduated from GCC in 1969 (nice), I've got a bridge to sell you," Allison tweeted.

Church Militant contacted Ettinger and O'Brien for comment but received no response as of press time.