VATICAN CITY (ChurchMilitant.com) - The father of a sick British infant is asking Pope Francis to step in and "save our son" amid a legal battle to pull the plug.

Tom Evans, father of Alfie Evans, the 23-month-old child with a rare degenerative neurological condition, met in a private audience with the Holy Father on Wednesday "to plea for asylum" and to "bring him, here, to Italy at Bambin Gesu [Hospital] where we know he is safe and he will not be euthanized."

"When Alfie shows me and his mum any sign of suffering or dying, we will enjoy every last moment with him but Alfie has not yet shown us he is ready to go, so we continue to fight just as he shows us to," said Evans to Pope Francis. "If Your Holiness helps our child, Your Holiness will be potentially saving the future for our children in the U.K., especially the disabled."

Following the meeting, the pope entrusted Italian Bp. Francesco Cavina of Carpi to preserve relations between the Vatican's Secretariat of State and the family "so that all initiatives be taken to transfer the child to the Bambino Gesù in Rome."

The pope mentioned Alfie and Vincent Lambert, who was injured in a 2008 car crash, which left him severely brain damaged in a coma as a quadriplegic, in his Wednesday General Audience. Lambert's physician forced a death sentence on the young man April 9, telling the hospital to stop feeding and hydrating him within 10 days.
Calling for a moment of silence, the Holy Father appealed for Alfie and Lambert:

I once again draw your attention to Vincent Lambert and little Alfie Evans, and I would like to repeat and strongly confirm that the only Master of Life, from the beginning to the natural end, is God! And our duty is to do everything to protect life. Let us think in silence, and let us pray that the life of all people be respected and especially these two brothers of ours. Let us pray in silence.

Evan's trip came in the midst of filing an application to the Supreme Court on Tuesday to appeal the ruling on Monday from the British Appeals Court. Lord Justice Andrew Moylan from the British Appeals Court dismissed the appeal, effectively handing down previous court rulings from the Supreme Court, European Court of Human Rights (ECHR), the appeals court and the High Court in Liverpool and London.
Moylan summed up Lord Justice Anthony Hayden's ruling from the Family Division of the High Court in Liverpool and London in February, saying, "Treatment is futile, as experts both here and abroad agree. Alfie will never make any developmental progress. He has been treated in Alder Hey [in Liverpool, England,] since 2015."
"It was not in Alfie's best interests to continue ventilation, that he should only receive palliative care and that it should be carried out by Alder Hey," insisted Moylan.
I once again draw your attention to Vincent Lambert and little Alfie Evans, and I would like to repeat and strongly confirm that the only Master of Life, from the beginning to the natural end, is God!
The ECHR ruled March 28 that the hospital could withdraw Alfie from his feeding and breathing after his parents appealed the Family Division of the High Court in Liverpool ruling from February. The ECHR ruling has been upheld by the court of appeal judges and Supreme Court justices.
Evans and Kate James, Alfie's mother, petitioned the Liverpool court to move their son to Bambino Gesu for treatment, but Justice Hayden prevented the couple from doing so, ruling in February that Alfie's life support should be turned off. A British appeals court also upheld the February ruling, allowing the sick toddler to die.
Britain's Highest Court said that Alfie should only receive palliative care, but his parents wanted the Rome hospital to provide the toddler with two surgical procedures — a breathing tube into his throat and a feeding tube into his stomach — both of which were suggested.

Evans appealed to the pope through the archbishop of Liverpool, Malcolm McMahon, in a letter on Sunday, affirming that he and Evans are baptized Catholics after speculation emerged that he was not Catholic. He said, "I was baptized and confirmed, and I'm looking to you as my shepherd and to the Holy Father as the Vicar of Jesus Christ on earth."

He continued, insisting, "That's why I knocked on the Church's door, asking for help in order to save my son from being euthanized! ... So please, Your Excellency, do accept my request for help and bring my voice to the Holy Father."

An internal memo from the archdiocese was leaked on Monday, in which an archdiocesan auxiliary bishop offered support "to doctors and staff" of Alder Hey even though they have "not met with the parents who, it is understood, are not Roman Catholic."

The memo also said the hospital is acting "in the best interests of Alfie" and describes Alder Hey as "a center of excellence" while including statements from the hospital and Liverpool police concerning the recent peaceful protests outside the hospital.

So please, Your Excellency, do accept my request for help and bring my voice to the Holy Father.

The pope also offered his prayers for Alfie and Lambert in Sunday's Regina Coeli address in St. Peter's Square, saying, "I entrust to your prayers the people, such as Vincent Lambert in France, little Alfie Evans in England, and others in various countries, who live, at times for long periods, in a state of severe infirmity, medically assisted in their basic needs."

"These are delicate, very painful and complex situations. Let us pray that every sick person may always be respected in his/her dignity, and cared for in a way suited to his/her condition, with the unanimous support of family members, physicians and other healthcare professionals, with great respect for life," continued the Holy Father. 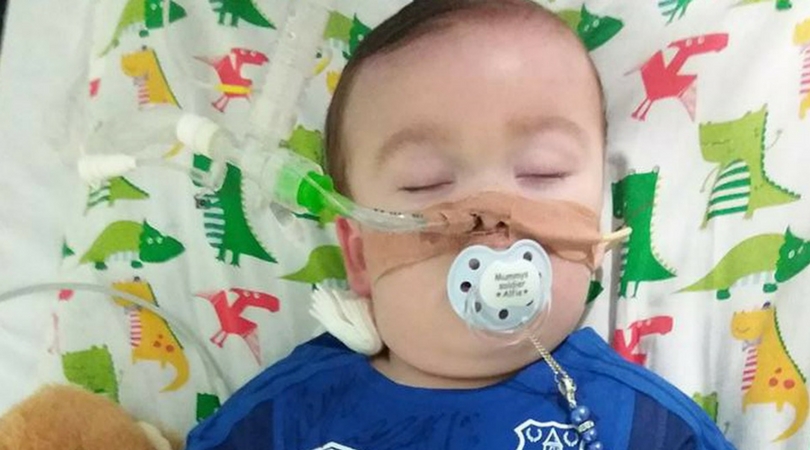