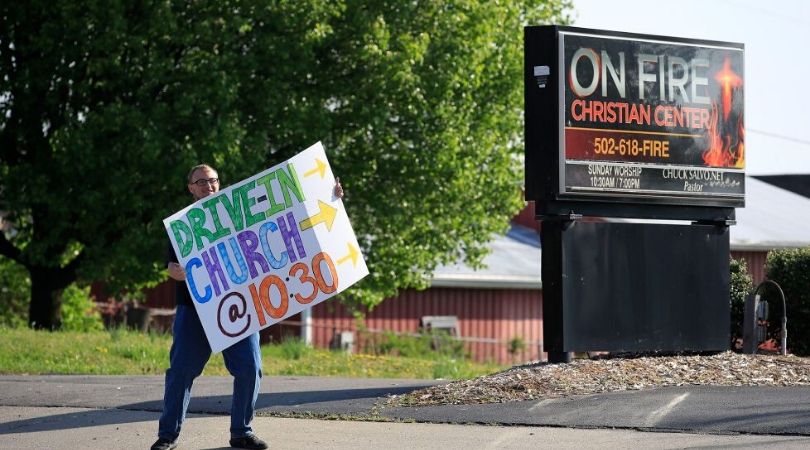 The mayor "has targeted religious worship by prohibiting drive-in church services, while not prohibiting a multitude of other non-religious drive-ins and drive-throughs — including, for example, drive-through liquor stores," noted Walker, who represents the U.S. District Court for the Western District of Kentucky.

Underscoring the church's adherence to social distancing guidelines while exercising freedom of worship, Walker said the mayor "ordered Christians not to attend Sunday services, even if they remained in their cars to worship — and even though it's Easter."

The mayor has "criminalized the communal celebration of Easter" in a way "that this Court never expected to see outside the pages of a dystopian novel," Judge Walker wrote.

Referring to the 19th-century political writer Alexis de Tocqueville, the judge added that his ruling "extends beyond the liberty to worship. It threatens liberty of all kinds."

Both the mayor and the governor also cracked down ... by ordering police to surveil churches to record the license plate numbers of worshippers.

Both the mayor and the governor also cracked down on Easter weekend worshippers by ordering police to surveil churches to record the license plate numbers of worshippers and in turn to share their data with local departments of health so they could compel dissidents to self-quarantine for 14 days.

Not everyone agrees with the measures of the Kentucky Democrats.

"What the hell?" Rep. Thomas Massie, R-Ky., tersely tweeted his reaction to orders for police to surveil church parking lots.

Senator Rand Paul, R-Ky., commented on Twitter about Gov. Beshear's overreach: "Someone needs to take a step back here."

"Thank God for a judge who understands the First Amendment prevents the government from prohibiting the free government exercise of religion" Paul later tweeted when he heard about Walker's injunction.

Reports of government crackdowns on religious worship have run rife across the United States.

Democrat Indiana Gov. Eric Holcomb is telling Christians how to worship, and according to a report in The Federalist, "has decided that this natural right [of freedom to worship] secured in both the Indiana and national constitutions is something he is allowed to waive."

Holcomb put forth a list of 13 edicts including "It is preferred that no Communion be distributed."

Democrat New York Mayor Bill de Blasio has threatened to permanently shut down houses of worship recently if they did not adhere to the city's social distancing guidelines, adding if religious centers do not listen to the city's authorities, law enforcement "will take additional action up to the point of fines, and potentially closing the building permanently."

Attorney General William Barr has been monitoring government officials cracking down on religious services amid the coronavirus pandemic, according to numerous reports, and is expected to make a statement soon.

Kupec added that while social distancing policies are appropriate during this emergency they must be applied evenhandedly and not target religious organizations.

The 38-year-old judge was appointed by President Trump to U.S. District Court in 2019. On April 3, the president announced his intention to elevate Walker to the U.S. Court of Appeals for the D.C. Circuit.

On Fire Christian Church is represented by Plano, Texas-based First Liberty Institute, self-described as "the largest legal organization in the nation dedicated exclusively to defending religious liberty for all Americans."