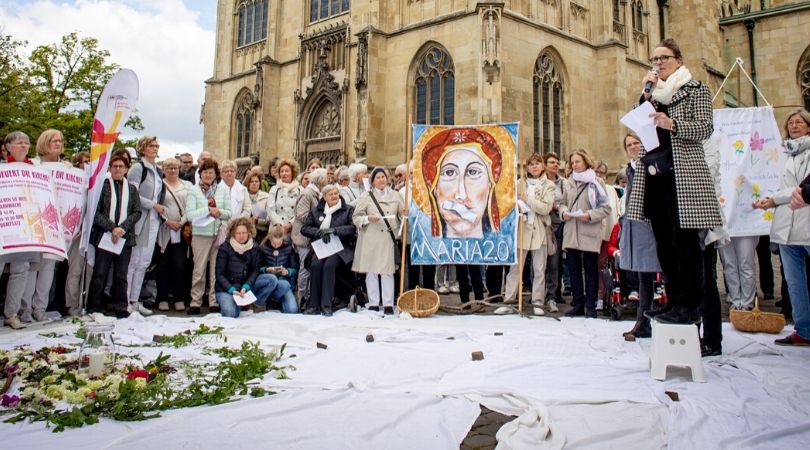 ROME (ChurchMilitant.com) - Catholic feminists in Western Europe are mounting an open "revolt" on March 1 demanding the ordination of women, while asserting that the creation of female priests is "only an interim solution" to their ultimate goal of abolishing the hierarchical priesthood.

Jesus broke with all hierarchies and would not "even want to build a priesthood," says Lisa Kötter, co-founder of German über-feminist movement Maria 2.0. Likewise, in an unprecedented backlash to Pope Francis' slamming the door on women's ordination in Querida Amazonia, feminist theologians in Spain are saying their "frustrations with the Church have reached a boiling point."

The rebellion has reached Rome, with feminists protesting the lack of women in senior Vatican positions. "No woman still occupies the office of prefect or secretary of any Roman dicastery," and "the day is long gone when there will be no need to resort to female quotas or that it is not news that a high position of the state or of the ecclesiastical government is entrusted to a woman," argues Francesca Bugliani Knox, in a "feminist" supplement to Vatican newspaper L'Osservatore Romano.

Radical bishops are supporting the revolt, with Bp. Heiner Wilmer of Hildesheim, Germany endorsing Maria 2.0 and calling Rome's "just keep going" attitude to women's ordination a "betrayal of the gospel," while Bp. Peter Kohlgraf of Mainz is dismissing "Rome's objections to the ordination of women" as "often not convincing."

"We can't and we won't keep quiet," the Association of Spanish Women Theologians (Asociación de Teólogas Españolas) warned in a Feb. 7 manifesto, announcing a "revolt" on March 1 outside doors of the cathedrals throughout Spain, with Madrid as the epicenter of the insurgency.

Protestors have titled their insurrection: "Women's Revolt in the Church, until Equality is Customary" (La Revuelta de Mujeres en la Iglesia, hasta que la Igualdad se haga Costumbre) and have launched a social media campaign to promote it across Europe.

At a press conference in Madrid, Sr. Pepa Torres Pérez of the Apostolic Congregation of the Heart of Jesus, appealed to all bishops and priests to join her revolt as "we want to sensitize men and women and recover that transgressive look of Jesus."

This is not a movement of Christian reform, but an angry, determined and aggressive attempt to pervert the gospel and the Church.

"A de-clericalized Church is necessary. Clericalism is a mentality that many priests do have, but not all ... which leads people to think that the body of a woman can never express the divine," said Torres.

There can "never again be an episcopal conference without us," the activist nun, theologian and social educator declared, referring to the revolt as "the 15-M of women in the Church." (The leftist anti-austerity movement in Spain is often referred to as the 15-M movement.)

Catholic theologian Gavin Ashenden who spent decades fighting the "long march of feminism" into Anglicanism, spoke to Church Militant warning that "the Anglican tradition has the advantage of having practiced the ordination of women for the last 50 years or so. It can therefore offer a stark warning of what will fly out of this Pandora's feminist box if it is opened."

This is not a movement of Christian reform, but an angry, determined and aggressive attempt to pervert the gospel and the Church, carrying with it not just the decadence of political utopianism, but a whiff of the halitosis of yet one more demonic assault on the teaching of Christ and obedience to the Holy Spirit.

Comparing the "revolt" to the Montanist challenge of the second century, Dr. Ashenden remarked:

The consequences of this latest attempt of politicization and the imposition of secular ideology will involve the replacement of the objective values of the Faith with moral and ideological relativism. It will involve a hatred of the Father Himself, when He becomes associated with the hatred of all so-called patriarchy and a brutal assault on motherhood and the lives of the unborn. The aggressive promotion of homosexual "marriage" will also follow, all flowing from the same poisoned well of pseudo-equality feminism drinks from.

The Spanish women theologians want the Church to recognize and adopt feminist theology, scrap "patriarchal and sexist" language from liturgies and homilies, dialogue with women's liberation movements and denounce the "neoliberal economic system" that continues to keep subjugate women.

The consequences of this latest attempt of politicization and the imposition of secular ideology will involve the replacement of the objective values of the Faith with moral and ideological relativism.

They are also attacking the "stubbornness" of bishops who oppose "a female diaconate and presbyterate to serve the Christian communities" and are challenging "the disproportion between the number of qualified women theologians and the number that are employed in theological faculties and other positions of responsibility."

Petra Focke, deputy spokeswoman of the Oldenburg chapter of the Catholic Women's Association of Germany (KFD), has announced that women will take over the pulpit at Masses in the district on the third Sunday in Lent, March 14–15.

At least eight parishes in the region have confirmed they will allow women to preach at Mass, although the women's homilies will be accompanied by sermons by bishops, priests or deacons, to comply with canon law. The feminist takeover of pulpits will be replicated a week later in the districts of Cloppenburg and Delmenhorst.

The movement has even spread to India, where, in October, 95 nuns released a statement stressing the development of a "feminist consciousness" and challenging "toxic masculinity and toxic femininity" which "affects the Church consciously and unconsciously" and labeling "clericalism a cancer that breeds on power games of domination and exploitation."

Ashenden is sounding the alarm that such a movement "will result in a repudiation of the humility and holiness of the Mother of God and a repudiation of gender itself as the paradigm of God's purpose, and its replacement with culturally Marxist identity politics in which gender is outlawed as a perverse construct of the misuse of power relations."