TURIN, Italy (ChurchMilitant.com) - For the first time in Italy, two women have been registered as mothers of a child born in Italian territory.
While most political authorities in Italy began the week preoccupied with Alfie Evans, Turin's mayor Chiara Appendino was trampling Italian law to further the LGBT agenda. Turin's city councillor Chiara Foglietta (an LGBT activist from the Italian Democratic Party) gave birth to her son after undergoing medically assisted procreation procedures in Denmark (assisted procreation in Italy is allowed exclusively for heterosexual couples). She and her partner, bioethicist Micaela Ghisleni, refused to accept registration without both names in the certificate, insisting they were being "denied their rights."
Foglietta had spent months in discussion with mayor Appendino, supported by the powerful apparatus of Turin's LGBT organizations. After the child's birth, as Appendino remained silent, Foglietta immediately went to the press, claiming the mayor "lacked the courage to intervene," using intimidating language to explain how a "farsighted politician" should act to advance the law.
Appendino caved to pressure and announced she was ready to "force the issue" to register the child. Soon after the announcement, on Monday morning, the ceremony with the registration of Foglietta's son (as well as transcriptions of birth certificates of children of other homosexual couples born abroad) took place.
"We have written an important page in history," the mayor declared. Foglietto celebrated: "This is the first child in Italy to be registered as the child of two mothers from birth!" Partner Ghisleni added, "We have also asked for the double surname [last name]. This is recognition of equality, not a privilege."
Straight couples who wish to give both last names to their children, however, must file for a lawsuit in the local prefecture — a lengthy process.
The Church of Turin expressed its disapproval through an editorial in the archdiocese's newspaper: "For now, this is a political gesture and the registration signed by Appendino has no legal effect."
Avvenire (The Italian Bishops' Conference newspaper) backed the affirmation, confirming that "the boy's registration has no legal value; the meaning of Appendino's gesture ... is entirely political." La Voce e il Tempo also stated that "every child's primary need is to have a mother and a father. ... [M]aternity, as any other desire in life, isn't achievable at any cost."
Gianni Reinetti, one of the first homosexual men to enter a civil union after the law was sanctioned in Italy, promptly reacted to the archdiocese: "The Church has missed the umpteenth opportunity to remain quiet! To say that children need a mother and a father is unacceptable! In the ... heart of God there are no right or wrong men, there's only one word: Love."
Cdl. Severino Poletto, Archbishop Emeritus of Turin, has also voiced his disappointment: "Turin is a city with a tradition of charity, solidarity and devotion to godly things. The initiative of the mayor goes against it all. ... The first step against the project of God was the unnecessary approval of the Cirinnà law [the gay civil unions law]."
Poletto also mentioned Alfie Evans: "In that case, also, there's a deviation that strikes the sacrality of human life."
Critics claim the link between pro-death bioethics and the LGBT lobby's disregard for children is evident in the Turin case, just as it became evident in Alfie Evans' case, which exposed Justice Anthony Hayden (who repeatedly ruled against Alfie Evans parents while also publicly advocating gay parenting) and his open contempt for Christians.
Micaela Ghisleni, Niccolò's non-biological "mother," is a bioethics professor who specializes in Practical Ethics at a prestigious Turin university. Her field of expertise includes "bioethical consultancy ... in healthcare, aiming to engage citizens in ethical decisions regarding the beginning and the end of life."
Dr. Mariella Enocmed, president of Vatican hospital Bambino Gesù, speaking about Justice Hayden's denial of the Evans' appeal to transfer their son to Italy, said, "I wasn't deluded, but I didn't think they'd have turned against us so openly. [T]his was the result of an ideological battle, the choice wasn't technical. They've deceived the family. I see that as an attack against our hospital, which belongs to the Vatican. Had it been the Gaslini hospital of Genoa, which later offered to receive Alfie, maybe they would have said yes."
"I'll be happy if they send Alfie anywhere, as long as he doesn't die in that hospital." Alfie passed away Friday morning, after nearly a week off the ventilator. 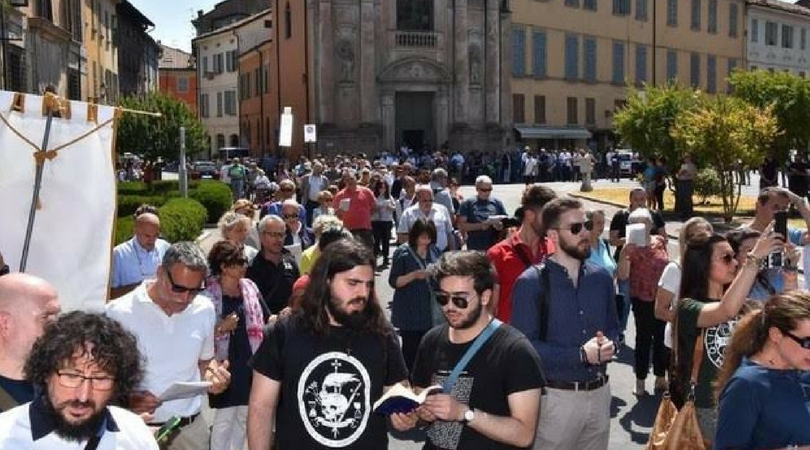