Flying Francis Trips Over ‘Sins of the Flesh’ 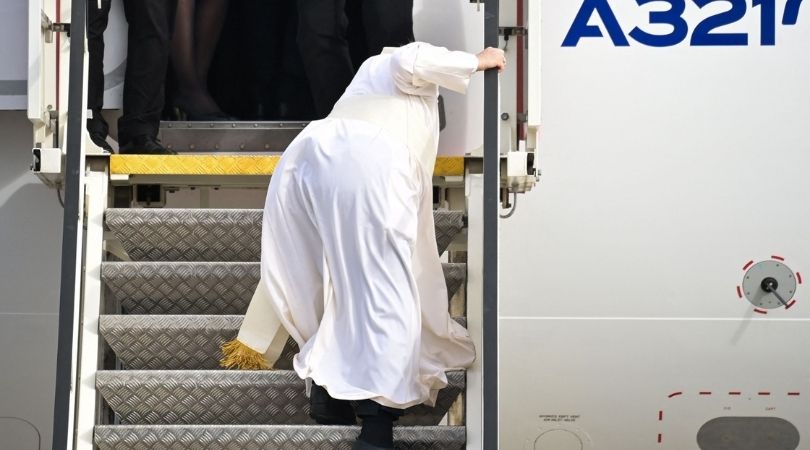 Pope wings it on Muslim migrants, puts foot in mouth on Greek history

ON BOARD THE PAPAL FLIGHT (ChurchMilitant.com) - Francis' off-the-cuff utterances to journalists on board his return flight from Greece has yet again triggered a maelstrom of mockery, with clergy and laity stepping up to correct the loquacious pontiff's theological, historical and political howlers.

Repeating the word "apologize" a dozen times, Francis launched into a torrent of meae maximae culpae, apologizing for migrants, divisions among Christians, and for the alleged unpatriotic role of Catholics in the 1821 Greek War of Independence.

"I apologized; I apologized before Chrysostomos, my brother Chrysostomos. I apologized for all the divisions that there are among Christians, but above all those that we have provoked: the Catholics," Francis grovelingly declared.

The pontiff meant to apologize to Abp. Hieronymos, but confused the Greek Orthodox metropolitan of Athens with Abp. Chrysostomos of Cyprus. Vatican News corrected the papal gaffe in its transcript.

On his visit to Athens, Greek Orthodox archbishop Hieronymos reprimanded the pope for Catholics not expressing patriotic support against the Muslim Ottoman Turks during the Greek War of Independence.

"We believe that at this historic juncture, you have the courage and sincerity to consider the failures and omissions of your Fathers, who did not support the struggle of our people for freedom," Hieronymos told Francis Saturday.

The sins of the flesh are not the most serious.

The pope agreed the behavior of such Catholics was "shameful" and told journalists he wanted to apologize because "some Catholics sided with European governments to prevent Greek independence."

"On the other hand, in the islands, the Catholics of the islands supported independence; they even went to war, some gave their lives for their country," Francis noted.

Tossing Catholics Under the Bus

A historian who asked not to be named told Church Militant the pontiff's comments would do more harm than good to Greek Catholics, who historically faced hostility from the predominantly Orthodox population in the Hellenic Republic.

"If Hieronymos is referring to Syros, we know Catholics opted for neutrality since the predominantly Catholic island was under French protection since France had already assumed the protection of the Catholics during the period of the Ottoman rule," the historian explained.

It's a distinct possibility that this pope hasn't ever read the Bible.

"It is ironic that the pope should apologize for Catholics not supporting the Greeks against Turkish aggression when Francis himself remained silent when the fanatical Islamic government of Recep Erdoğan occupied Hagia Sophia basilica and turned it back into a mosque last year," she added.

Syros was granted Vatican protection during the Greek War of Independence and served as the landing point of refugees from Chios, Psara and Crete.

Historians record the courageous resistance of Greek Catholic patriots both during the War of Independence and against the Nazis — Catholic laity, priests and bishops were even arrested or killed. But hard-line nationalists equate the Orthodox Church with the Greek identity and perpetuate this myth against Catholics. Francis has now become their mouthpiece.

But that was not the only strange framework proffered by the pontiff.

Defending Sins of the Flesh

It is the pope's comments on disgraced Paris archbishop Michel Aupetit that provoked the most outrage on social media as Francis downplayed the prelate's alleged affair with a woman as "small caresses and massages that he did to the secretary."

"This is sin, but it is not of the most serious sins, because the sins of the flesh are not the most serious. The most serious are those" of "pride, hatred," he maintained. "Therefore, Aupetit is a sinner, as am I ... Perhaps, as Peter was, the bishop on whom Jesus Christ founded the Church."

Catholics on social media cited several biblical texts in response to Francis' comments, including 1 Corinthians 6:9: "Neither the sexually immoral, nor idolaters, nor adulterers, nor homosexuals, nor thieves, nor the greedy, nor drunkards, nor revilers, nor swindlers will inherit the kingdom of God."

"Flee sexual immorality. Every other sin that a person commits is outside the body, but the sexually immoral person sins against his own body," Fr. David Palmer from the Anglican Ordinariate tweeted quoting St. Paul's letter to the Corinthians.

"It's a distinct possibility that this pope hasn't ever read the Bible," lay Catholic Christian Thomas replied, as a Catholic blogger mocked the pope's "in-flight entertainment."

"The sins which cause most souls to go to hell are the sins of the flesh," St. Jacinta Marto, would say, recounting the visions of Our Lady at Fatima.

Francis compared the European Union's recent proposal to cancel Christmas to similar attempts made by Napoleon, Nazi and communist dictatorships.

In a rare poke at the EU, the pontiff dismissed the globalist body's suggestion as "an anachronism" and "a fashion of a watered-down secularism."

"I don't think they will do that, it wasn't their intention," Francis explained, warning of "ideological colonization."

A journalist asked the pontiff to specifically name the European countries led by "devout Christians" where "democracy is retreating" — an accusation made by the pope during his speech at the presidential palace in Athens.

While refusing to name the countries, Francis repeated his slogans on "populism" and proceeded to compare populism to Nazism — "a populism that, defending national values, as it said, ended up annihilating democratic life."

I'm not a political scientist. I'm just saying what I think.

Francis, who has been known as an advocate for globalism, referenced Hugh Benson's apocalyptic dystopia The Lord of the World, cautioning against the "empire" of a "supranational government" which would "drown our identities."

"I'm not a political scientist. I'm just saying what I think," he remarked.

Asked about the increasing migrant hesitancy of Eastern Europe, Poland, Russia and Germany, Francis said: "It is fashionable nowadays to make walls or barbed wire or even concertina wire. It is usual to do these things to prevent access ... ."

"Those who build walls lose the sense of history, of their own history, of when they were slaves of another country," he added.

Catholics on social media ridiculed Francis' spiel on "walls," asking why the pope lives behind the high walls enclosing the Vatican and why he has now erected walls barring unvaccinated and untested people from entering the Vatican.

"The grand irony of all this is that Pope Francis lives in the only state to be surrounded by walls — Vatican City — and most of these bastions were erected to ward off ongoing Islamic invasions," Islamic scholar Raymond Ibrahim earlier commented.

Ibrahim explains that many of the Vatican walls were built by Pope Leo IV (847–855) to ward off North African Muslim invaders who landed in Ostia near Rome in 846 with 73 ships and 11,000 soldiers, and sacked the countryside, including the basilicas of St. Peter and St. Paul.

The grand irony of all this is that Pope Francis lives in the only state to be surrounded by walls.

"In 849, Muslims attempted a new landing at Ostia; then, every year from around 857 on, they threatened the Roman seaboard," writes French medieval historian C. E. Dufourcq.

Francis emphasized integrating migrants "because if you don't integrate the migrant, this migrant will have a citizenship of the ghetto."

The pontiff then cited the example of the "Zaventem tragedy," disingenuously attributing the attack by Islamic State militants on Brussels' Zaventem airport and a metro station to "the children of ghettoized, nonintegrated migrants."

The jihadis released an audio recording in Arabic claiming their attacks were carried out "by the grace of Allah and His gratitude alone" and were launched "to target crusader Belgium, which did not stop targeting Islam and its people."

"So Allah conquered through the hands of our brothers and cast in the hearts of the crusaders fear and terror in the very heart of their land," the Muslim militants declared, paraphrasing a verse from the Qur'an.

Francis also named Sweden as a "model of integration" for migrants. Sweden has taken in the most refugees per capita, primarily from Muslim countries like Syria, Somalia, Iraq, Iran, Turkey and Afghanistan. Muslims now make up 8% of Sweden's population (around 810,000 out of 10 million).

However, ex-Muslims like journalist Raheem Kassam have documented the growth of "no-go zones" in Swedish cities like Malmö, Göteborg and Stockholm.

In 2020, Muslim youth rioted in Malmö, bringing the problem to the attention of the world media. Anti-Semitic chants like "Khaybar, Khaybar, O Jews; the army of Muhammad shall return" are also frequently heard in the Islamic pockets of Sweden. 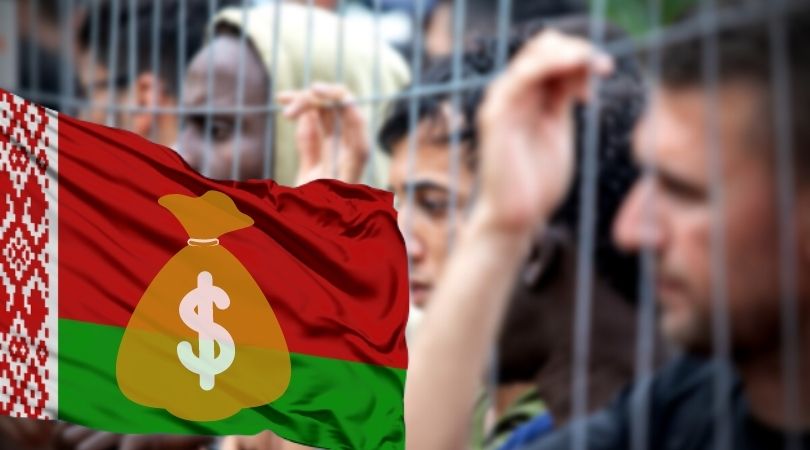 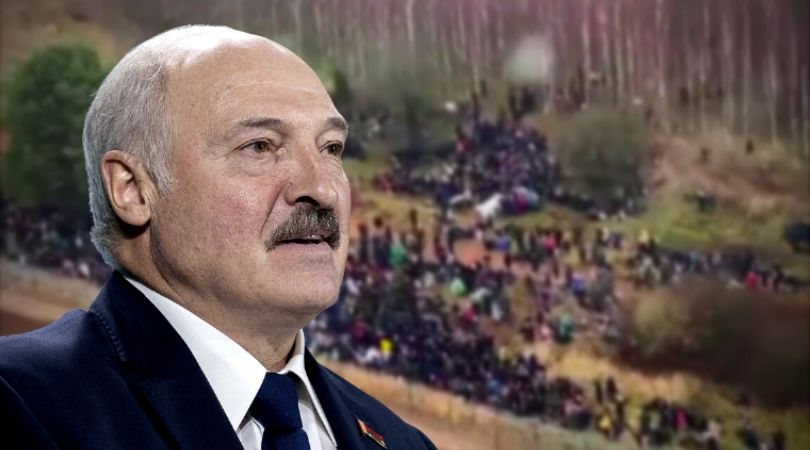