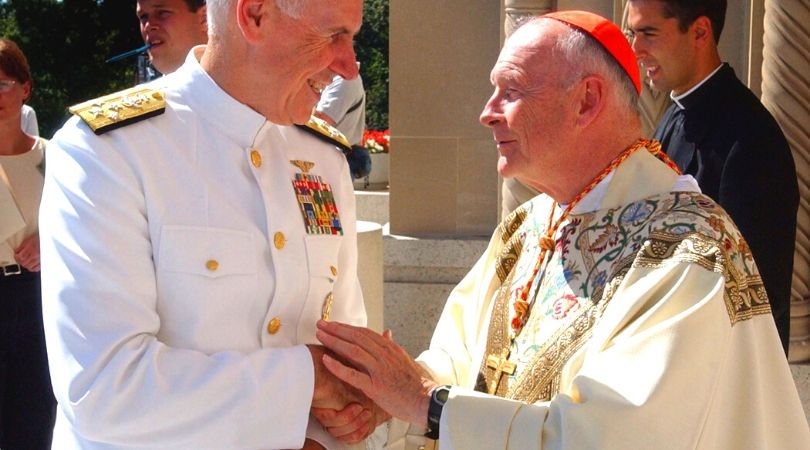 Monsignor K. Bartholomew Smith tells how McCarrick, who was defrocked for serial homosexual predation, was also a prolific financial predator during his tenure as archbishop of Washington, D.C.

In a Feb. 15 blog post to his parishioners, Smith explains the ex-cardinal's secret for becoming the "foremost fundraiser ... in the whole Church, the universal Church."

McCarrick was "a master of the art, and knew every technique and tactic to its finest point," Smith says.

"He paired with that an extraordinary, even preternatural sense of people, what they wanted and what they needed," he adds. "And he used this understanding to provide what people wanted and needed in order to get them to give what he was asking, and more besides."

The pastor at Saint Bernadette Catholic Church in Silver Spring, Maryland relates to his congregation that McCarrick devoured souls while fundraising. He did so, explains Smith, by becoming for donors a type of spiritual guru while freeing them from the necessity of obeying Christ:

He received the gratitude, the affection and the emotional dependence of untold numbers of people high and low, rich and poor, because he made himself the bestower of the approval that they craved, told them that they were good and God Himself was grateful to them, and delivered them from the authentic demands of Jesus and His gospel.

The monsignor describes how McCarrick assured people that their donations obtained for them God's mercy founded on a presumption of financial giving rather than on an authentic charity rooted in obedience to Christ's commands.

"This is what their giving purchased and what his fundraising obtained," recounts Smith. "But he took more from them than just their donations, for he was a ravening manipulator of human affections and a devourer of souls."

Smith points out the following needs in people that McCarrick had the uncanny ability to immediately perceive:

"He was a master of convincing folks of the pernicious delusion that God Himself needed, approved and in fact was grateful to them for the difference that they were making in the world," remarks Smith.

Smith adds, "This, in one line, is the snake-oil song of the ecclesiastical fundraiser, and he was the all-time virtuoso chanter and enchanter."

He paired with that an extraordinary, even preternatural sense of people.

Everyone wants approval, and McCarrick was an expert at giving it, he notes.

"He offered divine approval and God's own gratitude," recounts Smith, "and many were the ones who did his bidding to obtain it."

Virtually all, he says, fell under McCarrick's spell.

"You would be hard-pressed to find a person in our archdiocese, Catholic or not, who did not fall for this seduction to some degree, or at some time," adds the monsignor.

McCarrick's massive fundraising did promote some good works, says Smith, but it came at a devastating spiritual cost.

"Many good works were accomplished in this manner, and benefits from them still accrue to this day," he says. "But the cost, the cost in human lives and dignity, the cost to the integrity of the Faith, the cost to the fabric of the Church, [has] only recently become apparent to all."

McCarrick's homosexual predation of adult seminarians, according to one bishop, was also known to virtually everyone in ecclesiastic circles. Bishop Steven Lopes, head of the Personal Ordinariate of the Chair of Saint Peter, told his parishioners in 2018 that he was upset by all the prelates claiming they knew nothing of McCarrick's homosexual relationships with adult seminarians.

"It's the parade of cardinals and bishops who have rushed to the television cameras clutching their pectoral crosses saying 'I knew nothing,'" Lopes states. "I don't believe it and I am one of them."

He adds, "I was a seminarian when Theodore McCarrick was named archbishop of Newark. And he would visit the seminary often. And we all knew."

During his final years in Newark, McCarrick became Smith's direct supervisor. Church Militant asked Smith if he'd ever been aware of any rumors prior to 2018 of McCarrick engaging in any inappropriate sexual relationships with adults.

Smith responded by laughing off the question as being too broad. When pressed, he declined to answer.