Bishop Olson: ‘I Am Not a Dictator’

Olson goes on the attack against Catholics petitioning for investigation

The Fort Worth bishop responded on Saturday to a recent petition by disgruntled Catholics calling for the Vatican to investigate his diocese. Church Militant reported on Dec. 10 that the petition, which has accrued more than 1,400 signatures, accuses Olson of abuses of authority, "numerous" violations of canon law, verbal abuse of the faithful and vindictiveness against clergy and laity.

Olson responded to the petition on Dec. 15 in a pastoral letter, an accompanying "pastoral video" and an interview with the Fort Worth Star-Telegram.

"They are a handful of people with their own agenda," Olson said of the petition's supporters. "I don't think this is as big of a problem as is being presented. I think this is a concerted effort that is tied to these [FRK Advocates] to try and link all of these people who are unhappy."

But Stephen Knobbe, spokesman for the petitioners, refuted this characterization.

"Our group is being characterized as something that's causing discord with the Church, or tearing it down," Knobbe told Church Militant. "And that's furthest from the truth."

The resignation last summer of Fr. Richard Kirkham, former pastor of St. Martin de Porres parish in Prosper, prompted the formation of the FRK Advocates, which launched the petition.

The resignations of Fr. Jeff Poirot from Sacred Heart Church in Wichita Falls and Fr. Gary Picou from St. Elizabeth Ann Seton Church in Keller, which came only four days apart, as well as the controversial closure of San Mateo Church in Fort Worth and changes at Nolan Catholic High School in Fort Worth, raised additional concerns.

Olson said he was as surprised as parishioners by Poirot and Picou's resignations, emphasizing that there had been no misconduct or obedience issues with either.

"I asked them to stay, consider a retreat, they said no and they walked out," Olson told the Star-Telegram. "The timing is such that people are disappointed and saddened that each of them are gone, as am I."

In his letter, he wrote that the two priests resigned "of their own accord," adding, "I did not ask them to leave, nor did I force them out."

Olson described the FRK Advocates in his letter as a "handful" of "dissatisfied people identifying themselves as supporters of Father Richard Kirkman [sic]." He attacked the group for having "undertaken a destructive social media and political campaign in an attempt to discredit and disrupt my ministry and leadership as your bishop."

"They have launched a website, engaged in negative social media attacks, taken out billboards, and have sought media coverage seeking to air their grievances," he continued, calling the group's efforts "attempts to divide us from within."

Olson claimed Kirkham knew of sexual misconduct and predation by a priest of the Dallas diocese and failed to report it. As evidence, the bishop provided a letter allegedly written by Kirkham to the accused priest, which Olson described as "lewd, intimidating, and threatening," and so "obscene" as to be "not befitting of a priest to write."

Parishioners have asked why the bishop won't allow them to see the letter, but Olson claims they don't have the "right." The entirety of the letter has not been published as of press time, though the Star-Telegram has published two short excerpts.

FRK Advocates argue that Kirkham is a "whistleblower" being punished for coming forward, which Olson calls "patently untrue," claiming that Kirkham admitted he never intended to report the Dallas priest. Olson accused Kirkham of failing to "consider the plight of the alleged victim," saying that the accusations were too severe for fraternal correction to suffice.

FRK Advocates argue that Kirkham is a 'whistleblower' being punished for coming forward.

Walsh also told Church Militant that Kirkham indicated at the beginning of the letter his intent to report the Dallas priest's behavior. The excerpts published in Star-Telegram corroborate Walsh's claim. Before Kirkham could act, however, Olson demanded his resignation and prohibited him from contacting Dallas' bishop, Edward Burns.

The Dallas diocese denies the allegations against its priest, with diocesan spokeswoman Annette Gonzales Taylor saying that they were found to be false.

Walsh maintains that Kirkham's actions were "correct," since the Dallas priest went to his own bishop regarding the matter. Olson, however, wrote that the accusations against the Dallas priest were too severe for fraternal correction to be sufficient, accusing Kirkham of failing to "consider the plight of the alleged victim."

According to Walsh, Kirkham never signed the letter, which he called a "draft." He claimed that letter was signed with Kirkham's name by someone else.

Regarding criticisms of his "heavy-handed management style," Olson told the Star-Telegram, "I'm not a dictator. I'm not a potentate. People are going to do what they want to do. I just ask them that they worship in peace."

The Star-Telegram reports that several people who have been in contact with the paper about Olson have expressed fear of repercussions for criticizing him were they to be publicly identified. According to Sacred Heart parishioner Vivian Wolf, "Many diocesan employees have either quit or are afraid to speak up."

"This is about the salvation of souls," he continued. "It's not a hobby. It's centered on Christ."

Olson claimed not to know why he is feared within the diocese.

"I'm decisive, and I'm direct, but I'm not violent," he told the Star-Telegram. "I don't think I'm vindictive."

The paper noted that some of the priests that parishioners are supporting have been accused of sexual abuse. One such priest, Fr. Genaro Mayorga Reyes, formerly pastor of All Saints Church in Fort Worth, was removed effective Nov. 5 after allegedly groping a man's genitals in a public park in September. According to police reports obtained by the paper, Reyes has denied the accusation.

"Now there are people who say — 'no — he needs to be reinstated,'" Olson said of Reyes, "and that's ridiculous."

Walsh told Church Militant that, while he does not know whether Reyes is innocent or guilty, he, Poirot, Picou, and Kirkham all fit a larger, disturbing pattern of good, popular priests departing from their parishes under Olson's leadership. 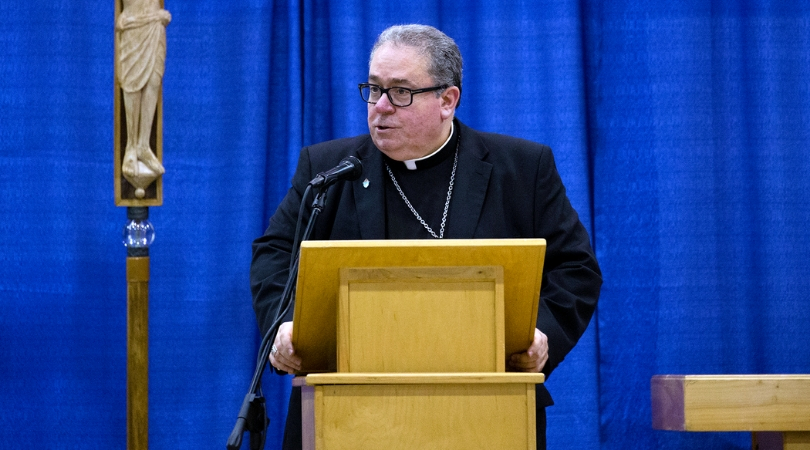