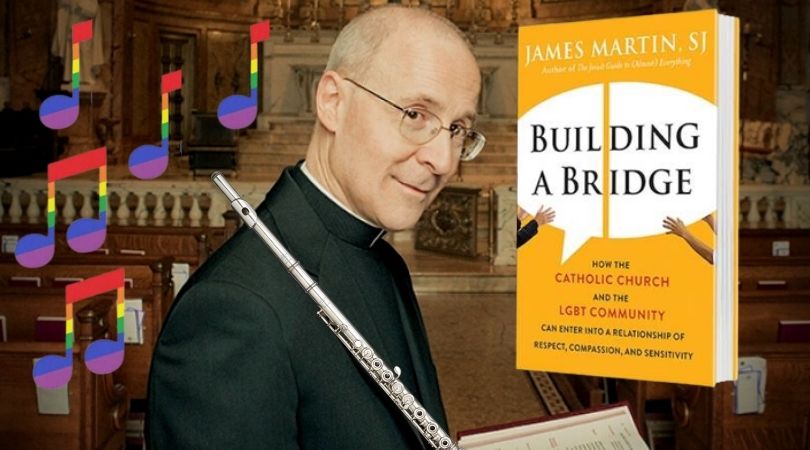 In June of 2017, Fr. James Martin's book Building a Bridge was published. Since its publication, it's gotten loads of traction from the LGBTQ crowd because it validates sodomy in a carte blanche manner. Conspicuously absent in Martin's book is any mention of original sin, the fall of man or the need for mankind to obey God's moral laws. Also missing is any discussion about the disciple of Christ striving to live a virtuous, holy life following in the footsteps of humanity's redeemer, Jesus.

Building a Bridge is basically LGBTQ propaganda for which Fr. Martin has been paid handsomely. While it's far from a work of erudition, some are drawn to it solely because Fr. Martin is held up as a priest in good standing with the Church.

The ever self-promoting Martin never misses a photo op with any homo-loving bishop, or even with Pope Francis himself. Martin, like the Energizer Bunny, keeps on going and going!

Just recently, a new documentary (also titled Building a Bridge) came out that promotes Martin for piping a tune that encourages an entire generation of poorly catechized youth to embrace the sin of sodomy.

One fundamental problem with Fr. Martin, his so-called "ministry," his "preaching" and his book is that they're all based on a false anthropology.

Christians have held for two millennia the understanding that human beings were created "in the image and likeness of God."

As our Sacred Scriptures recall, with mankind's fall in Eden, we lost not only immortality but also intelligence, knowledge, health, stamina and motivation. As a result of their disobedience to God, Adam and Eve opened wide a portal for disorder in their lives and the lives of their offspring.

The book of Genesis recounts that by the time of Abraham, fallen human nature had become so disordered that even basic sexual orientation was skewed. Men were attracted to men and even women to women.

This disordered sexuality is far different than how God had made man in the beginning. As recorded in chapter one of Genesis, God created man with only two distinct sexes: "Male and female he created them." By design, God made men and women to be attracted to the opposite sex in order to procreate.

As recorded in chapter 19 of Genesis, the main reason God destroyed Sodom and Gomorrah with fire from Heaven was because of rampant homosexuality, as demonstrated by a large group of  Sodom's men threatening to sodomize Lot's angelic visitors.

Both the Old and New Testaments repeatedly present sodomy as a sin abhorred by God. And for two millennia, this was understood to be the truth by everyone; including Christians, Muslims, Hindus and Buddhists. This unchanging truth is being challenged in modern times by LGBTQ activists.

But Fr. Martin brushes aside the world's ancient taboo against sodomy, a taboo which is also a tenant of our Sacred Tradition. He thus leaves many of us asking the question, "How does he get away with it?" How does a cleric get away with preaching heresy without being censured?

The short answer to the question is that the majority of our bishops are gay or gay-friendly themselves and, therefore, can't confront him on this dark truth.

Why doesn't Fr. Martin get defrocked for pushing the gay heresy?

The longer answer on how Fr. Martin gets so much publicity without any episcopal reprimand, is money. There is big money backing Fr. Martin. Documentaries and queer promos don't just fall from the sky. Instead, they are produced in a slick fashion, in a polished way, owing to the millions of dollars pushing such trash.

If the majority of our bishops were straight, and big money weren't promoting him, Fr. Martin would have been defrocked years ago. He may have become just another 60-something dirty old man spending his waking hours grooming kids for gay sex. The only reason Fr. Martin's book sells is that it was written by a priest — as if the Holy Roman Catholic Church had given its approbation for all things gay. Gay clerics, gay bishops — why not have a gay pope in the future? It would all be just so grand!

Another reason why Fr. Martin gets away with promoting sodomy is that he dresses it up to be something it's not! All pretty with a big pure white bow.

As part of my recovery program from being sodomized, I participated for a number of years in victim support groups. Each night when the support group gathered, it never failed to surprise me just how many men gathered for those meetings. There really are thousands of abuse victims out there! For many weeks, we'd have more than a dozen men assembled at a meeting. Many would talk about how being sodomized forcibly introduced them to gay sex, which, in turn, detrimentally affected their lives.

Another theme discussed was how, after having been raped, some men dealt with the same gross bodily effects. How they, in their shame, hid or threw away their ripped and bloodied clothing. I did.

Another common discussion topic was how some men dealt with AIDS, or other sexually transmitted diseases, in the aftermath of being sodomized. The real truth about the whole LGBTQ gay-sex thing is that it's far from being just so fabulous! It's not glamorous as Fr. Martin and his choristers advertise.

Never once during his advocacy for the sin of sodomy has Fr. Martin mentioned that being sodomized hurts. It does hurt! It causes physical pain for those who engage in it because it's not natural. God did not make a person's rectum to be used as a sexual organ.

The only bridge Fr. Martin is building with his book and ministry is a bridge to Hell.

As a man who was sodomized, I beg to differ with Fr. Martin and the rest of the LGBTQ cabal who sanctify sodomy as if it were ordained by God from on high. The dirty truth about sodomy is that it is painful and dirty. I will leave this to your imagination.

In nature, you never see a male animal of any sort using another male's rectum when in the rut! It just does not happen. And as a kid on the farm, who witnessed many couplings of various domesticated animals, this is nature's truth!

One of the greatest responsibilities a man receives upon ordination to the priesthood is that of preaching the Truth. He must proclaim to the world, that in Jesus Christ, fallen human beings can be redeemed and humanity fully restored in Christ.

A priest's primary duty is to preach. He's to proclaim that by God's gift of grace received from Jesus in the sacraments, fallen disordered human beings can be made new. With the spiritual remedies from the sacraments, humanity's disorder and concupiscence inherited from Adam and Eve can be fully cured and each man can become, as St. Paul said, "a new creation" in Christ.

And Fr. Martin must realize that Christ did not redeem humanity by suffering His passion and death only for man to remain in his fallen disordered state.

In her diary, St. Faustina describes how most are tragically on the road to perdition:

One day, I saw two roads. One was broad, covered with sand and flowers, full of joy, music and all sorts of pleasures. People walked along it, dancing and enjoying themselves. They reached the end without realizing it. And at the end of the road, there was a horrible precipice; that is, the abyss of Hell. The souls fell blindly into it; as they walked, so they fell. And their number was so great that it was impossible to count them. And I saw the other road, or rather, a path, for it was narrow and strewn with thorns and rocks; and the people who walked along it had tears in their eyes, and all kinds of suffering befell them. Some fell down upon the rocks, but stood up immediately and went on. At the end of the road, there was a magnificent garden filled with all sorts of happiness, and all these souls entered there. At the very first instant, they forgot all their sufferings. 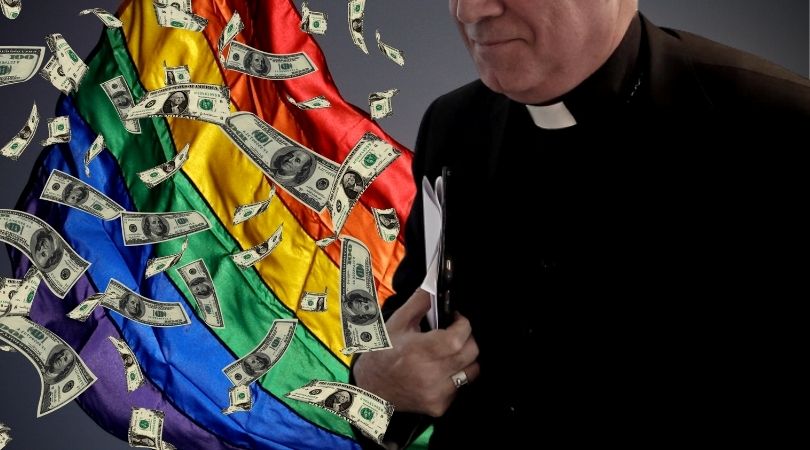 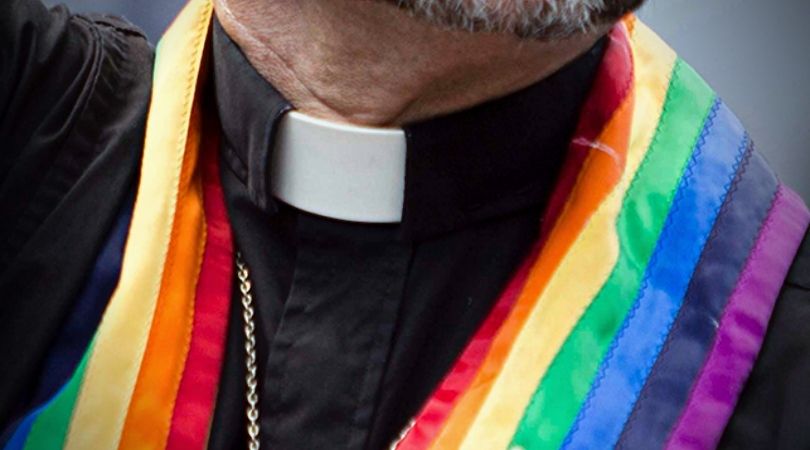