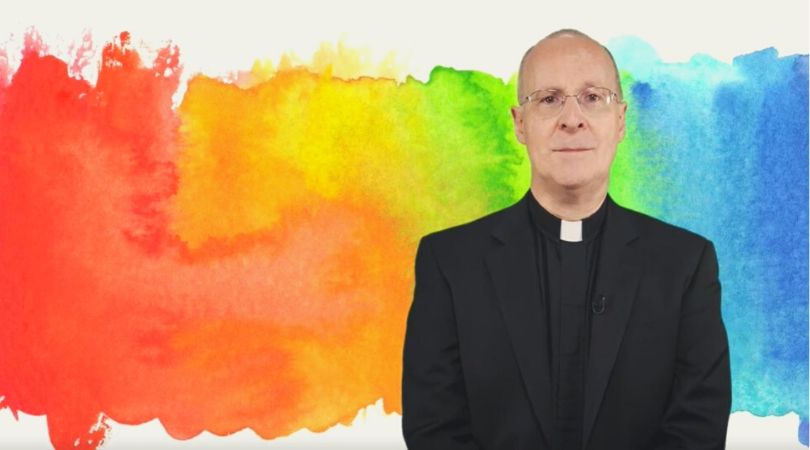 DETROIT (ChurchMilitant.com) - Father James Martin is claiming his work promoting the LGBT agenda is not meant to challenge Catholic doctrine.

This was in the context of a video titled, "Father James Martin answers five common questions about LGBT Catholic ministry."

At another point in the video, Martin complained about "LGBT Catholics" not feeling welcome "in their own church."

On the question of why he doesn't speak more about chastity, Fr. Martin gave the following response:

Well, I do talk about chastity in almost every lecture. The topic also comes up often in question-and-answer sessions. And not to put too fine a point on it, but I'm also living chastity; I've been living my Jesuit vow of chastity for 30 years now. One reason I don't focus on it, though, is because every LGBT Catholic I've ever met, every member of their family, and pretty much every Catholic already knows Church teaching on celibacy and chastity when it comes to homosexuality. There are also many other individuals and groups in the Church who focus on that. I'm simply focusing on other topics ...

He went on to say that his focus includes "how to invite LGBT people to see themselves as loved by God," "how to show respect and welcome to LGBT people in Catholic parishes and schools," and "how we can combat the high incidence of suicide among LGBT youth."

I do hope in 10 years you'll be able to kiss your partner. Why not? What's the terrible thing?

"My own ministry focuses on areas I think other people are overlooking," he opined.

At several points, the video cuts to images of laypersons in gay-pride t-shirts attending Mass and assisting in the sanctuary.

Father Martin has been widely criticized by Catholics for failing to emphasize the call to chastity.

In an interview at Villanova University in 2017, Martin claimed that people who have left the homosexual lifestyle are in "conflict" with themselves — that their lives aren't "integrated" as the lives of sexually active homosexuals.

He also said that gays are not obligated to live chastely because they have not "received" the "teaching" of the call to chastity.

In that same interview, he affirmed the idea of gays kissing at "sign of peace," telling a practicing homosexual who attends Mass, "I do hope in 10 years you'll be able to kiss your partner. Why not? What's the terrible thing?"

Again in 2017, at a Fordham University symposium, Martin described same-sex "marriage" as "a loving act" and said the Church must "reverence" it.

Additionally, Martin has been faulted for promoting transgenderism (including in children) and cheering for theological dissidents.

In a 2017 Facebook post, Martin defended the "right" of a young child to identify as the opposite sex and be treated as such in a parish religious education program.

He has spoken fondly of pro-gay theological dissidents such as Sr. Jeannine Gramick and Fr. Gregory Boyle.

Martin might regret that, in virtue of canon 1055 (which presents the nature of marriage itself), two lesbians cannot marry each other.

Father Martin's critics are numerous in the Catholic world.

Martin might regret that, in virtue of canon 1055 (which presents the nature of marriage itself), two lesbians cannot marry each other, nor can two homosexuals, but, if that is what underlies Martin's complaints about celibacy supposedly being imposed on such persons, he needs to take it up with the infallible Magisterium of the Church.

In like manner, researcher Gregory Brown wrote in a 2017 First Things article, "The authority of teachings cannot be tested by consulting the inner senses of practicing Catholics. ... Subjective certainty is not a certain guide — nor even, really, a reliable one — to whether one's intuition actually springs from the sensus fidei."