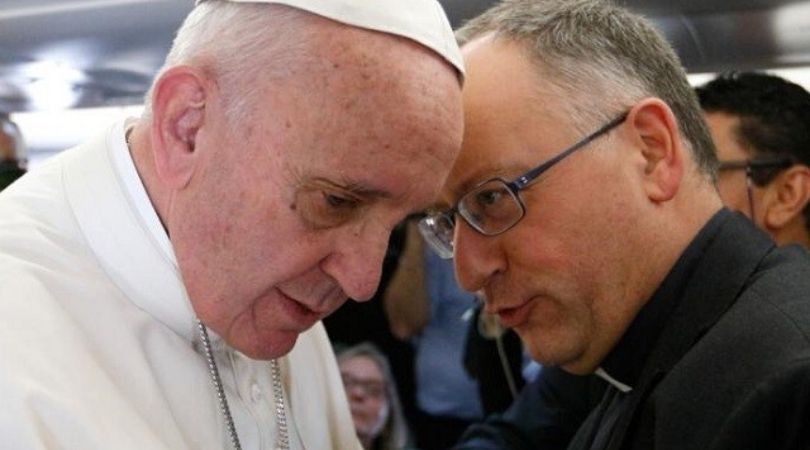 Fr. Antonio Spadaro is a well-known proponent of leftist ideology

VATICAN (ChurchMilitant.com) - A high-ranking Jesuit and close papal ally is blasting critics of the Amazon Synod as "racist" and invested in protecting "political-economic interests."

In an article published Friday in Medium, Fr. Antonio Spadaro, director of La Civiltà Cattolica (considered the official voice of the Vatican, whose content is vetted by Vatican Secretary of State Cdl. Pietro Parolin), the Vatican advisor praised the interventions in the synod as "painting a large fresco in which everything is interconnected: faith and history, hope and geography, charity and politics."

"This is why the preemptive attacks aimed at the Synod, dressed up as a fundamentalist religiosity that does not disdain racist tones, come from groups that protect political-economic interests," Spadaro claims.

The synod is expressing 'a broader and more mature vision of the Church ... aware of the need to imagine new ecclesial ministries, also for women.'

He went on to note that the synod is expressing "a broader and more mature vision of the Church, finally alienated from clericalism, aware of the need to imagine new ecclesial ministries, also for women."

Spadaro's comments are reminiscent of similar remarks made by Chicago's Cdl. Blase Cupich last year, who denounced critics of Pope Francis as racist: "Quite frankly, they also don't like him because he's a Latino," he told NBC.

Spadaro: “the preemptive attacks aimed at the Synod, dressed up as a fundamentalist religiosity that does not disdain racist tones, come from groups that protect political-economic interests ...” #SinodoAmazonico https://t.co/RteR1qlpGQ

Synod panelists faced tough questioning Thursday from multiple journalists, including Church Militant, which asked whether the Church would be "serious about evangelization in terms of bringing people to the knowledge of Jesus Christ and baptizing them as Catholics."

Brazilian Abp. Roque Paloschi responded in part, "All I can say is that inculturation respects this process on both sides; our idea is not to eliminate the other person's cultures, but to preserve some seeds that are present" — leading to backlash from Catholics on social media.

"What a pathetic answer," said one commenter. "Our Catholic ancestors must be so ashamed right now. I know I am."

"Gibberish and rubbish," added another.

National Catholic Register's Ed Pentin asked how the Brazilian bishops' associated group CIMI could accept money from the Ford Foundation, which aggressively promotes abortion and LGBT activism around the world.

Spadaro came under fire in 2017 for publishing an article slamming American conservatives — singling out Church Militant and Michael Voris in particular as belligerent, an apostolate that employs "shocking rhetoric" to impose an "ultraconservative" political agenda in Catholic dress.

Titled "Evangelical Fundamentalism and Catholic Integralism in the USA: A Surprising Ecumenism," Spadaro went on the attack against American conservatives, Evangelicals and President Trump, and lamented "Catholic integralists" who allegedly insert politics into their work of saving souls.

"There is a shocking rhetoric used, for example, by the writers of Church Militant," Spadaro complained, "a successful US-based digital platform that is openly in favor of a political ultraconservatism and uses Christian symbols to impose itself. This abuse is called 'authentic Christianity.'"

"The hypocrisy of Fr. Spadaro is shocking," said Voris at the time. "He accuses Church Militant of using theology to advance a political agenda — which isn't true — while he spends every waking hour using the Vatican and the Church to publicly advance a left-wing agenda."

At the halfway point, living it from inside, this is my take on the Synod for the #Amazon: from faith to politics, all is connected #AmazonSynod https://t.co/pcxR6TZACG

Pope Francis recently endorsed Spadaro's 2017 article. During his September trip to Mozambique, he recommended the piece to a group of Jesuits:

Two important articles in Civiltà Cattolica have been published in this regard. I recommend them to you. They were written by Father Spadaro and the Argentinean Presbyterian pastor, Marcelo Figueroa. The first article spoke of the "ecumenism of hatred." The second was on the "theology of prosperity." Reading them you will see that there are sects that cannot really be defined as Christian.

La Civiltà Cattolica has published questionable content in the past. In February 2017, Vaticanista Sandro Magister noted the "peculiar" nature of an article promoting the possibility of women priests.

Journalist @EdwardPentin asks Bishop Krautler - lead author of the Amazon Synod working document - whether the push for female deacons in the Amazon masks the agenda to ordain women priests in the Catholic Church.

"La Civiltà Cattolica has published an essay by its deputy editor, Father Giancarlo Pani, which seeks to reopen the possibility of ordaining women to the priesthood," wrote Magister. "This journal, published by the Jesuits but vetted by the Vatican Secretariat of State, has long been a means of communicating lines of thought which reigning popes consider important."

In light of news that synod fathers are openly promoting the possibility of ordaining women to the diaconate, along with the public admission of Bp. Erwin Kräutler (main author of the controversial Amazon Synod working document) that he wants female priests, Spadaro's latest remarks may be viewed by those with a critical eye as perfectly in line with the synod's underlying agenda.