WASHINGTON (ChurchMilitant.com) - Less than a month after Church Militant reported that Fr. James Martin would be addressing Washington, D.C. seminary alumni at Theological College, the seminary has rescinded its speaking invitation.

The press release from the school, issued Friday, explained that the invitation had been sent to Martin "over a year ago." It continues:

However, since the publication of his book, Building a Bridge, Theological College has experienced increasing negative feedback from various social media sites regarding the seminary's invitation. As a result, after considerable consultation with various constituencies, and in the best interest of all parties, the decision was made to withdraw the invitation extended to Father Martin, who accepted the decision graciously and appreciated the seminary's regret that such a decision needed to be made. 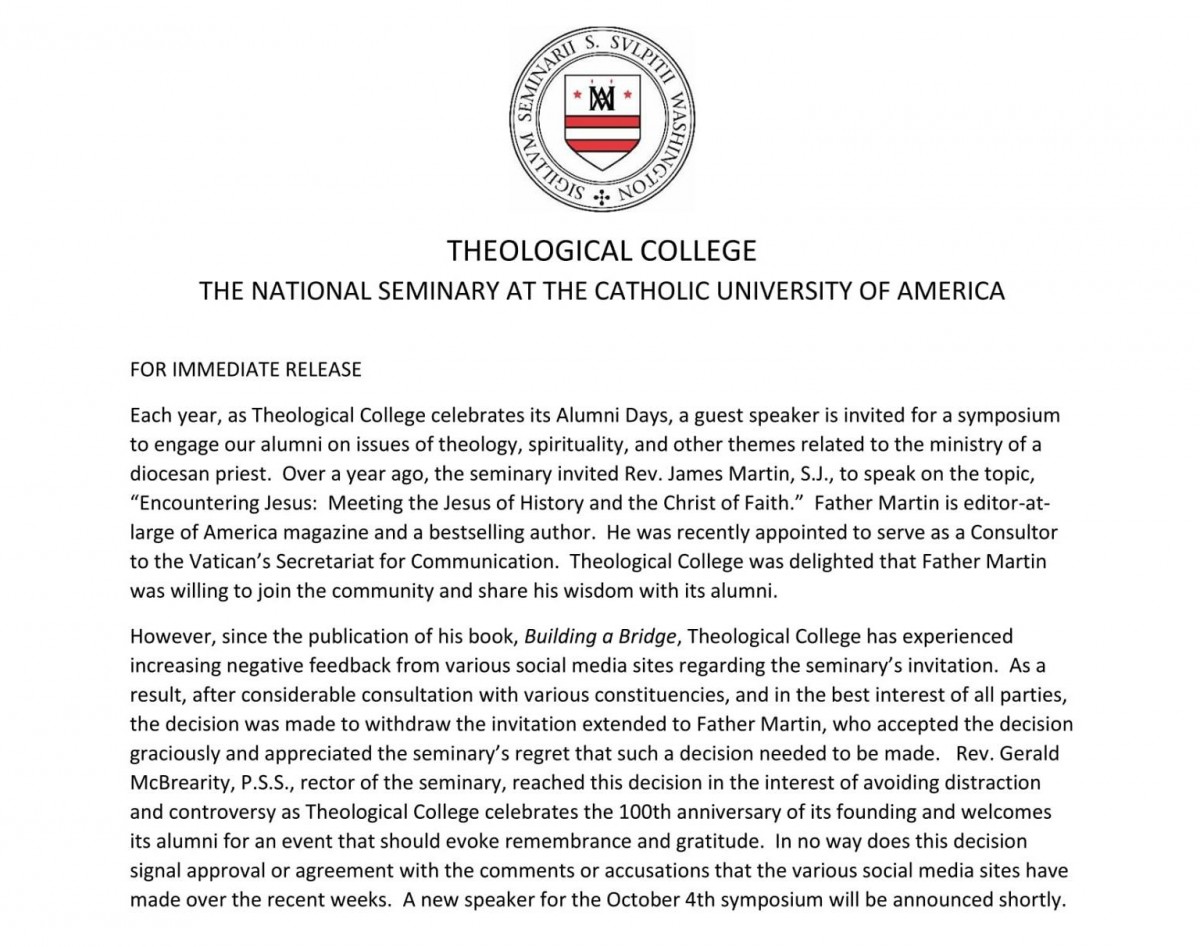 Martin had originally been scheduled to speak for Alumni Days 2017 from October 3–4, where D.C.'s Cdl. Donald Wuerl is going to be the principal celebrant as well as recipient of the Olier Award.

Theological College is the seminary of the Catholic University of America, and is among the most prominent seminaries in America, with men from 26 dioceses around the country being formed for the priesthood.

This is the second major event from which Fr. Martin has been disinvited. In late August, Church Militant reported that the priest was asked not to be the keynote speaker at the upcoming gala for the Equestrian Order of the Holy Sepulchre, one of the most ancient and illustrious orders of the Church, under the direct patronage of the pope.

I can confirm that the invitation to Father Martin was in fact rescinded a little while ago, although we wanted to organize a replacement speaker before we made the official announcement. As I'm sure you can appreciate planning an event of such a size in New York takes a long time, and as such the invitation to Father Martin was extended last year before the most recent controversies.

The rescinding of the invitation came after intense backlash from knights, outraged that the order would welcome the unabashed LGBT advocate to its gala.

Shortly after that, Church Militant also confirmed that Martin's speaking invitation to the Baltimore Diocesan Fiscal Management Conference had also been canceled. The conference told Church Militant Martin had to back off for reasons of health. Even so, Martin continues to travel around the country giving talks at other events.

Martin is blaming Church Militant in part for these cancellations. In a Facebook post Friday, he complained, "Dear friends: Theological College, the seminary at The Catholic University of America, in Washington, DC, today cancelled a talk I was to give on Alumni Day, on Oct. 4, thanks to a campaign by Church Militant, the priest known as 'Father Z' as well as Lifesite News."

He continued, "That campaign caused a storm of phone calls, emails and messages to Theological College, which included, I was told, people screaming at the receptionists who answered the phone. In the end, they felt that the expected protests and negative publicity would distract from Alumni Day."

Martin went on to credit Church Militant's reporting for his cancellation at the Knights of the Sepulchre event, and revealed that he had also been disinvited from giving a talk at Catholic International Development Charity in England (CAFOD), scheduled for late October.

"Each of these cancellations was a result of anger or fear over my book 'Building a Bridge,' about LGBT Catholics," he claimed.

In the case of Theological College, the fears were of angry protesters disrupting Alumni Day. In the case of the Holy Sepulchre, it was anger from some members over the topic of LGBT Catholics. In the case of Cafod it was not a response to any campaign but fear that my presence itself would garner negative attention, after the group had recently faced other similar problems.

Martin was back in the news recently over scandalous remarks claiming Catholics should "reverence" same-sex marriage. At a September 5 symposium at Jesuit Fordham University, the Jesuit priest said, "I have a hard time imagining how even the most traditionalist, homophobic, closed-minded Catholic cannot look at my [active homosexual] friend and say, 'That is a loving act, and that is a form of love that I don't understand but I have to reverence."

Martin's book Building a Bridge has come under fire from several bishops as well as a number of laymen for failing to discuss Church teaching on chastity for homosexuals.

Cardinal Robert Sarah, head of the Congregation for Divine Worship, reminded his audience of a key fact omitted from Martin's book: homosexual acts are "gravely sinful and tremendously harmful to the well-being of those who partake in them."

In defense of this omission, Martin wrote, "I am no moral theologian and did not want to enter into a discussion about church teaching on sexual activity."

Martin has also criticized the language of the Catechism, claiming it's "hurtful" to declare that same-sex attraction is "objectively disordered." Instead, he advocates for changing the language to "differently ordered."

Church Militant contacted CUA for comment, but as of press time received no immediate response. CUA has not announced who the replacement symposium speaker will be.