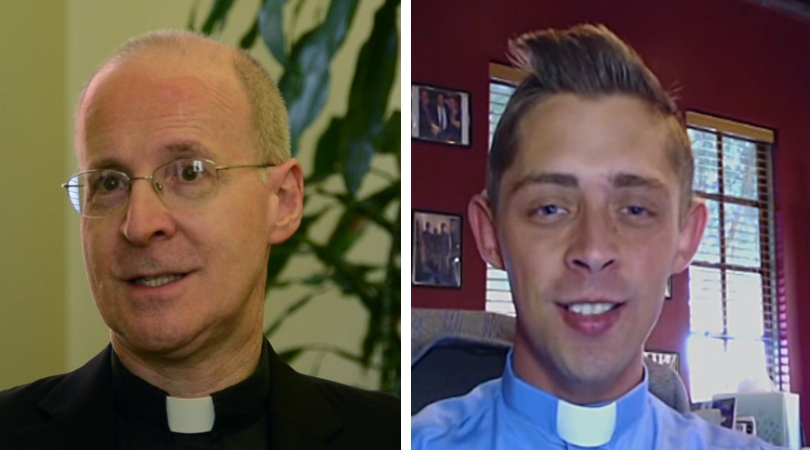 DETROIT (ChurchMilitant.com) - A pro-gay Jesuit celebrity priest has praised a Protestant pastor who has spoken highly of polyamory.

The Jesuit priest referred to Robertson as a "real disciple of Christ."

Great to welcome my friend Brandan Robertson @BrandanJR evangelical pastor, theologian and leader in welcoming LGBT people into churches. He's in NY to talk about his new book "The Gospel of Inclusion: A Christian Case for LGBT+ Inclusion in the Church." A real disciple of Christ pic.twitter.com/FmmQvVMlB6

But Robertson, a young Evangelical pastor based out of San Diego who is openly gay, has done more than call for inclusion of the LGBT community.

He has also told those who have an "open or polyamorous relationship" — where multiple people have the same sexual partner — that their relationships are "holy."

A video shared online in October last year that has since been removed showed Robertson telling the congregation during a sermon:

For those who are in an open or polyamorous relationship here this morning who might be squirming, because this is an uncomfortable question to hear in church sometimes: I want you to hear me loud and clear as a minister of the Gospel of Jesus Christ: Your relationships are holy. They are beautiful and they are welcomed and celebrated in this space.

We call all of us together to the same set of standards that we call everyone to: to seek to follow Jesus in all of our relationships. To seek to be honest and respectful and self-sacrificial and consensual and loving with your partners. When any of us live into these standards we can be sure we are on the path to wholeness and holiness.

The 26-year-old is lead pastor at Missiongathering Christian Church in San Diego.

These comments apparently came during a talk in favor of "queer theology."

In an article last month, HuffPost asked Robertson and two other pastors about dating and sexuality. Robertson opined that premarital sex is not intrinsically wrong, saying, "I believe for some people, waiting for marriage before having sex can be a very healthy path. I also believe that for most people, sex before marriage is a healthy expression of the gift of sexuality and is not 'sinful' or morally wrong."

Robertson also spoke ambivalently of the sexual "hookup" culture, claiming, "In general, I try to push back against 'hookup' culture in my own life, just because I don't find having a lot of random sex very fulfilling (but I don't judge others who do)."

Causing similar blowback was Fr. Martin's recent defense of pro-LGBT activists in Poland who sacrilegiously used a renowned image of Our Lady.

The Jesuit priest defended a blasphemous pro-LGBT poster that added rainbow-colored halos to the "Black Madonna" of Częstochowa — a revered icon of the Blessed Mother with the Child Jesus that is said to date back to the time of the Apostles.

Martin defended the image by noting that different cultures portray Our Lord and Our Lady differently in order to "feel closer to them."

After all, the Blessed Mother and Jesus are frequently depicted in clothes, and with images, intended to help people in a certain locale, or among a certain group, to feel closer to them. A rainbow is an obvious way to try to bring them into the devotional life of LGBT people.

He asked in another Tweet, "Are Mary and Jesus only for straight people?"

Some Catholics on social media pushed back against Fr. Martin, claiming the image was clearly a political statement against Catholicism rather than a devotional image.

Father Martin is editor-at-large of America magazine, author of several books and consultor to the Vatican's Dicastery for Communication.

In recent years, faithful Catholics have been alarmed at Fr. Martin's repeated pro-LGBT messaging. At speaking gigs and other events, Martin has said that Catholics should "reverence" homosexual couples, that homosexuals are not bound to chastity because they have not "received" the teaching on sexual morality and that former homosexuals live a far less "integrated" life than sexually active gays — among other things.