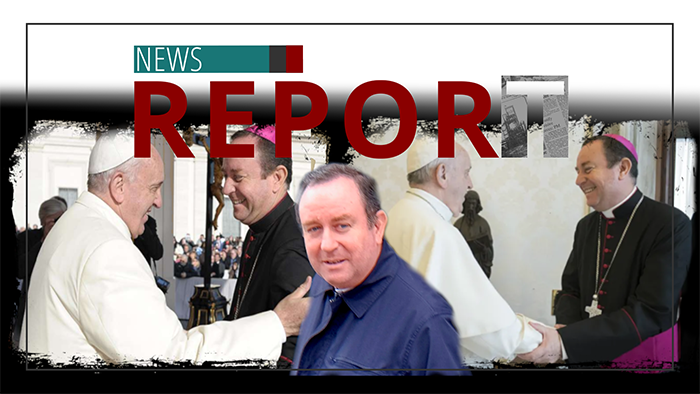 Another Francis appointee immersed in homosexual and financial scandal is facing trial. The prelate hails from the pontiff's home country of Argentina, where Francis elevated him to the episcopacy in 2013. Church Militant's William Mahoney has more on the upcoming trial and attempted Vatican cover-up.

In October, Argentinian bishop Gustavo Zanchetta will appear in court for sexually abusing two seminarians. He's charged with "aggravated continuous sexual abuse" from 2016–2017 while bishop of Orán in northern Argentina. Zanchetta is summoned under penalty of law to appear before three judges in court, where roughly 40 witnesses are expected to testify.

Reports indicate Zanchetta would visit the seminary at night, observe the seminarians and prompt them to hug and massage him. Appointed in 2013 by Francis (only months into his papacy), Zanchetta was summoned to Rome in 2015 regarding pornography found on his cell phone. The pornography found included depictions of young people engaged in sexual acts.

Bp. Gustavo Zanchetta: "Well, I was perplexed. The truth is I was here in my office. I found out because my cell phone had messages from people in Buenos Aires." The Argentinian prelate claimed his phone was hacked, an explanation the pontiff apparently accepted, as the bishop was returned to ministry.

But Orán's vicar general continued to blow the whistle on Zanchetta's misdeeds, reporting the prelate's homosexual predation again in 2017. That same year, the bishop resigned as Orán's local ordinary, citing health reasons. Five months after resigning, Zanchetta's health apparently improved enough to head to Rome, where the pope created an ad hoc position for him in the Vatican.

Zanchetta became an assessor for APSA, the Administration of the Patrimony of the Apostolic See, which functions as the treasury and central bank of Vatican City and the Holy See. The charges of homosexual predation Zanchetta will face in court come October were leveled against him in 2019.

The Vatican intervened at the time in a letter to Argentinian authorities, insisting Zanchetta be permitted to continue his daily work in Rome as a Vatican employee. An Argentinian judge cleared the prelate to return to the Eternal City.

But this year, in June, reports surfaced Zanchetta was no longer working at ASPA, and now, if found guilty, he faces 3–10 years in prison. It appears, even with the Vatican attempting to cover for him, accusations of homosexual predation have caught up to the pontiff's Argentinian paisan. One function of APSA is to oversee the Vatican's real estate holdings like its infamous London property at the heart of a Vatican trial, currently underway, involving a cardinal and nine others.