The case of Benedict apparently coming out against Francis' possible ordination of married priests in the Amazon and other outlying regions is closed, the pontiff tells Scalfari, founder of La Repubblica, in a three-page interview.

Francis insists that the pope emeritus has demonstrated "fraternal" solidarity with him and has not allied himself with Cdl. Sarah, the Guinean prelate and co-author of From the Depths of Our Hearts.

"The controversy with Ratzinger [Benedict] is therefore closed and what little or much remains of opponents must be considered a fairly normal phenomenon in such structures," Francis comments.

"It is normal that there are different visions," he adds. Moreover, "in an organization that embraces hundreds of millions of people all over the world, there is always someone who will be against [the leadership]."

Headlined "Francis: Me, Ratzinger and Saving the Earth" and with the subtitle "Pope Francis: With Ratzinger the Case is Closed," the telephone interview is being interpreted as a firefighting attempt to extinguish the media conflagration sparked by the book on priestly celibacy.

"I am moved only by the desire to make our Church survive by updating our collective spirit to be in tune with modern civil society," Francis insists, explaining that "the Church is obliged to become more modern — to be with the poor and the weak, not with the rich and strong."

"All religions, not just Christianity, must know modern society very well in its cultural, spiritual and living depth. This is a modernity that began four or five centuries ago."

Media commentators are reading the pope's genuflection to modernity as a hint that the Church is soon to approve married clergy in the Amazon — a step they fear may be a slippery slope toward elimination of the celibate priesthood.

Scalfari claimed in his published interview that the Holy Father had "not taken seriously the attempt of a group of cardinals supporting Sarah," and instead had "accepted Ratzinger's friendly and even fraternal offer" on Thursday, a day before the interview. But Scalfari's interviewing techniques have been questioned, casting doubts on what Pope Francis actually said as opposed to what Scalfari attributes to him.

Some say Scalfari's professed closeness with Francis has compromised his objectivity — an issue that arises in the interview. Scalfari repeatedly addresses the pope as "Your Holiness" until Francis interrupts: "You don't always call me that. I prefer Pope Francis or even simply Francis. We are friends, aren't we?"

Media pundits are shooting down the interview as the Holy Father's attempt to use Scalfari as his spin doctor.

Scalfari, who has conducted a number of controversial interviews with the pope, brags about his "most intense relationship with His Holiness, who has a broad knowledge of the current situation, not only in Italy and Europe but in the whole world."

The Holy Father believes he has the task of bringing together everyone under God: not only Catholics and Protestants, but monotheists and polytheists, Scalfari writes.

"Authority is not command but coherence. Jesus had authority because there was consistency between what he taught and what he did," observes Francis.

"The planet is under threat, the climate must be our first priority as an emergency," Francis asserts, adding: "In some areas the sea rises, in others it drops. The climate is one of the most interesting issues that we must all take on."

Media pundits are shooting down the interview as the Holy Father's attempt to use Scalfari as his spin doctor.

Paolo Becchi, journalist and professor of philosophy of law at the University of Genoa, remarks:

The Church is going through a difficult time and what is the Pope doing? He gives an interview to a partisan newspaper, not realizing that he looks like the head not of the Church but of a political faction. May the Lord save the Church from the sins of men of the Church.

"It is now certain that Scalfari is a meme created by Bergoglio, a way to troll his traditionalist enemies," Maurizio Crippa lashes out in Il Foglio.

If traditionalist Catholics thought they could use Ratzinger and Sarah to knock Francis, he has bounced back with Scalfari's help, Crippa suggests. Crippa imagines Francis saying: "You thought you gave me a hit and here I am. Why don't you bring me to answer Viganò? Here it is, my answer: look how we have fun, me and Eugenio."

Aldo Di Lello mocks the interview in Secolo d'Italia as "the molasses flowing abundantly from the two tabloid pages." He quips: "The two illustrious interlocutors fly high — so high that their respective figures no longer stand out. Where's the Catholic pope? Where is the secular 'pope'? Where's the difference? Because there must be a difference.

Francis' supporters who have questioned the credibility of Scalfari's previous interviews with the pontiff are commending the peacemaking effort.

"One never really trusts Scalfari, but what Francis told him — Benedict XVI has expressed his fraternal loyalty to him, and that [the] pope [is] not bothered by Team Sarah’s maneuvers — rings true," left wing Catholic journalist Austen Ivereigh tweeted.

Gianni Riotta, Italian journalist and visiting professor at Princeton University, praises Francis' interview for "elegantly glossing over the polemics of conservatives who exploit Benedict XVI" and "speaking of saints, grace, poor people, nature, God and humanity as a pope must." 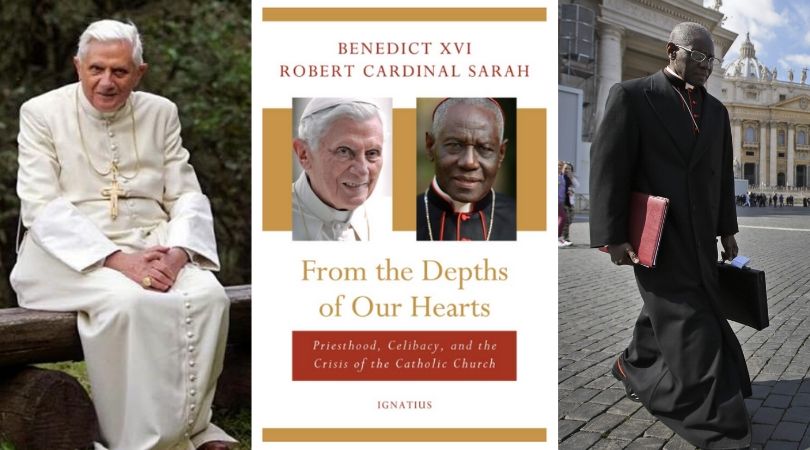