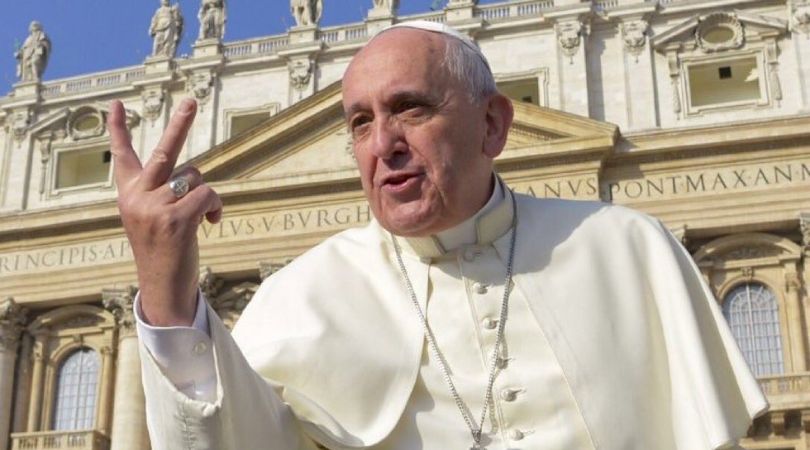 VATICAN CITY (ChurchMilitant.com) - Seminarians from Barcelona say they were scandalized when Pope Francis reportedly used the f-word and other expletives at a papal audience in Rome.

According to testimonies from the seminarians, Francis ranted against "f***ing careerists who f*** up the lives of others." The pope criticized "those who climb to show their a**," the Italian media outlet Daily Compass reported on Monday.

The trainee priests were shocked when Francis also reportedly insisted that priests should never deny absolution to penitents in the confessional under any circumstances.

Eyewitnesses describe how the pontiff, at the audience on Dec. 10, tossed his prepared speech aside, saying that "it would have been boring." Instead, Francis told the seminarians to ask him questions.

"After handing out the address prepared for the occasion, the pope engaged in dialogue with those present at the meeting," the Holy See Press Office clarified.

The pope's speech, which was sent to the Vatican press corps, is very different in content from the Holy Father's alleged off-the-cuff remarks. The former reminds the seminarians that their "first obligation will be a life of prayer born of gratitude" when they become priests.

The prepared address urges the seminarians to "never extinguish that fire which will make you fearless preachers of the Gospel, dispensers of divine treasures" and to "take up your rosary" and ask Mary "to help you to unveil the mysteries of the priesthood."

We can never deny absolution, because we become a vehicle for an evil, unjust, and moralistic judgment.

"It is not the first time that the Pope has stated that the speech he had prepared (or that had been prepared for him) is very boring and foisted a different message on the audience," Spanish website Germinans Germinabit reported.

Describing the pope's words as spoken with "total crudeness," the website reported how it had compiled from witnesses "a fairly extensive account in which the crude language used by the Pope has been collected in its entirety."

In Francis' answer to a question from one seminarian, the pope is reported to have invited them "not to be clerical, to forgive everything" and "if we see that there is no intention to repent, we must forgive all."

When the publicity cameras are off him, Pope Francis turns into a different figure.

"We can never deny absolution, because we become a vehicle for an evil, unjust, and moralistic judgment," Francis reportedly told the seminarians, who were accompanied by the auxiliary bishop of the diocese, Javier Vilanova Pellisa.

Addressing rectors and formators of seminaries in Latin America earlier in November, Francis similarly put aside his 12-page written speech, remarking, "It is a heavy thing, let us read it calmly" and proceeded to deliver an extempore message, the Italian section of Vatican News reported.

Francis told the Latin American rectors and formators that priests "have to ask the permission of the bishop"  to withhold absolution in the case of mortal sin.

"This happens, please! Our people cannot be in the hands of criminals! And a priest who behaves like this is a criminal, in every word. Like it or not," the pope emphasized.

At the same November meeting, Francis also insisted that priests and seminarians must practice "closeness." The pontiff elaborated, "This must be contagious, that is, the priest, the seminarian, the priest must be 'close.' Close to whom? To the girls of the parish? And some of them are, they're close, then they get married, that's fine."

"With the Barcelona seminarians, however, it seems that the joke with an inappropriate double meaning was turned into language that would embarrass even a sailor," Daily Compass commented.

Sources who live in Casa Santa Marta in proximity to Francis told Church Militant that they had witnessed outbursts of foul language from the Holy Father when he loses his temper.

The joke with an inappropriate double meaning was turned into language that would embarrass even a sailor.

In his bestseller The Dictator Pope: The Inside Story of the Francis Papacy, author Henry Sire (whose pen name is Marcantonio Colonna) records several instances of the pontiff exploding with expletives.

According to Sire, Fr. Peter Hans Kolvenbach, former superior general of the Jesuits, wrote a damning report on Fr. Jorge Mario Bergoglio in 1991, accusing Bergoglio, who required a dispensation to be appointed auxiliary bishop, of "a series of defects, ranging from habitual use of vulgar language to deviousness."

"When the publicity cameras are off him, Pope Francis turns into a different figure: arrogant, dismissive of people, prodigal with bad language, and notorious for furious outbursts of temper which are known to everyone from the cardinals to the chauffeurs," Sire wrote.

Sire quoted other commentators to confirm how "Pope Francis' outbursts of temper, his rudeness towards subordinates, and his vulgar language have become notorious throughout the Vatican."